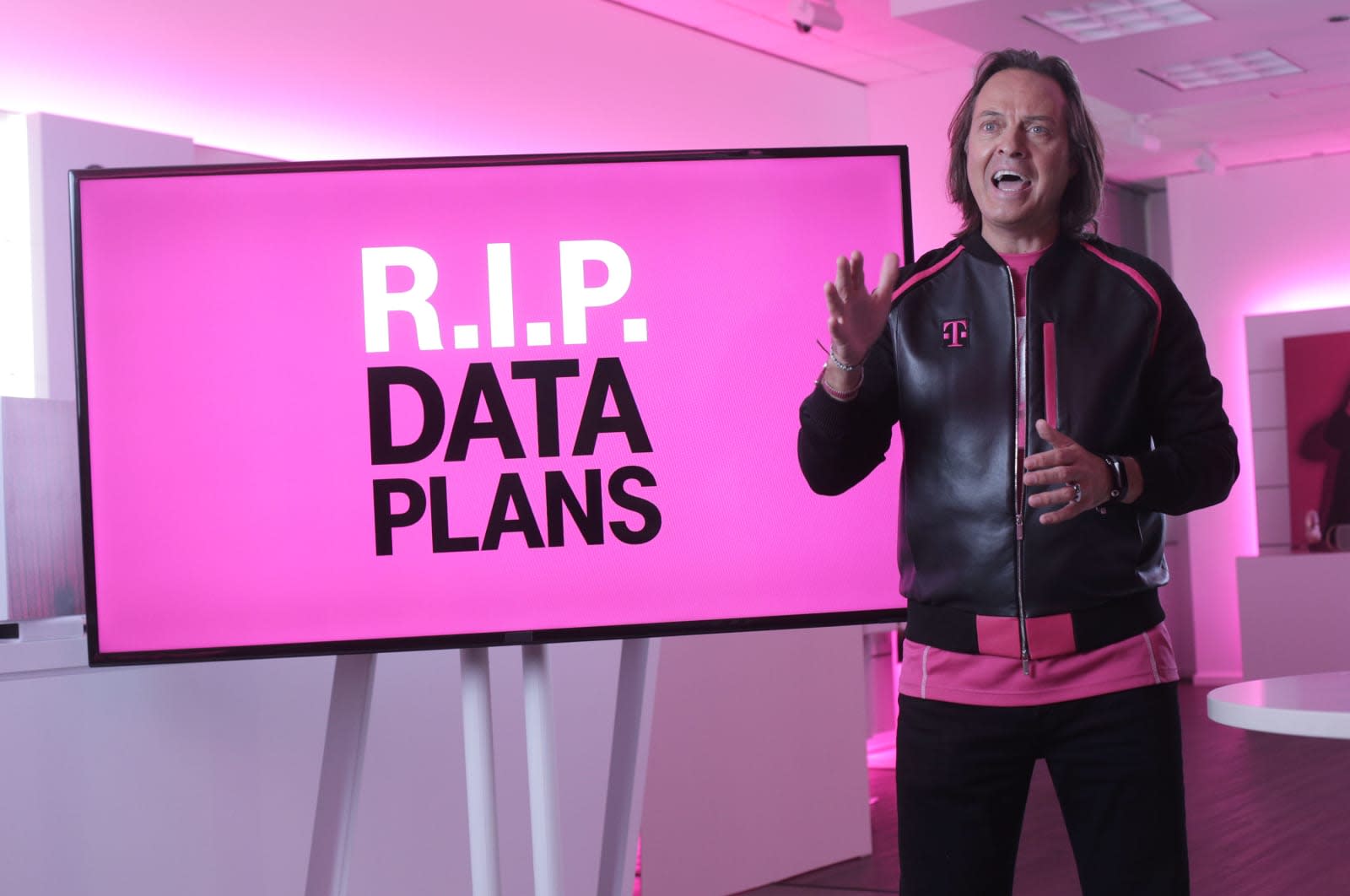 T-Mobile has offered an unlimited data option for a while now, using it as a big differentiator between it and AT&T and Verizon. But now, it sounds like the carrier is going to do away with data buckets entirely and offer one plan that includes unlimited talk, text and data. It's called T-Mobile One, and it'll be available to current and new customers as of September 6th.

CEO John Legere announced the new plan this morning in a video blog, saying that he wanted to get rid of the confusion and huge number of choices that the other carriers currently offer. But, as is often the case with wireless plans, there's a lot of fine print here in the new plan to be aware of.

The big catches for T-Mobile's new plan come down to two things: tethering and video streaming. The T-Mobile One plan includes "unlimited" tethering, but only at 2G speeds. That'll make it essentially useless. If you want to use LTE speed when tethering, you'll have to pay $15 per month for 5GB of data.

Video is even more complicated. While T-Mobile is offering "unlimited" data, they're throttling all video down to 480p standard definition resolution. If you want to use your data to watch high-definition video, it'll cost a whopping $25 per line, per month. If you're signed up to one of T-Mobile's current unlimited plans, you can watch video in HD -- though the company had been defaulting everyone to lower definition video. You have to actively switch on HD video if you want to get things in a better resolution. But with this new T-Mobile One plan, you'll have to pay through the nose if you want to watch HD video.

T-Mobile's new plan isn't even really any cheaper than its existing offering. If you get four lines, it'll be only $40 per line, but sign up for less and you'll be paying quite a bit. A single line is $70 a month, less than the $95 it currently costs. Two lines is $120, $20 cheaper than the existing option. Additional lines after that are $20 each.

These changes come at the end of a month that saw AT&T and Verizon both revamp their data offerings. Both carriers added more data to their various plans, but those plans also cost a bit more now. Verizon also added some limited carryover data as well as the option to throttle your data speeds if you go over your limit rather than pay an overage charge. Not to be outdone, Sprint is also in the process of announcing some new plan details on Twitter right now.

One big question is whether or not T-Mobile's old plans will be available or whether T-Mobile One will be the only option going forward for new customers. T-Mobile says it won't be eliminating its existing Simple Choice plans right now, but it expects T-Mobile One to be its main offering going forward. So that likely means the existing Simple Choice unlimited plan that includes more tethering data and HD video playback will be going away soon.

Update: This post has been updated to reflect more details on T-Mobile's new pricing structure.

In this article: dataplans, gear, johnlegere, mobile, t-mobile, uncarrier, unlimiteddata
All products recommended by Engadget are selected by our editorial team, independent of our parent company. Some of our stories include affiliate links. If you buy something through one of these links, we may earn an affiliate commission.