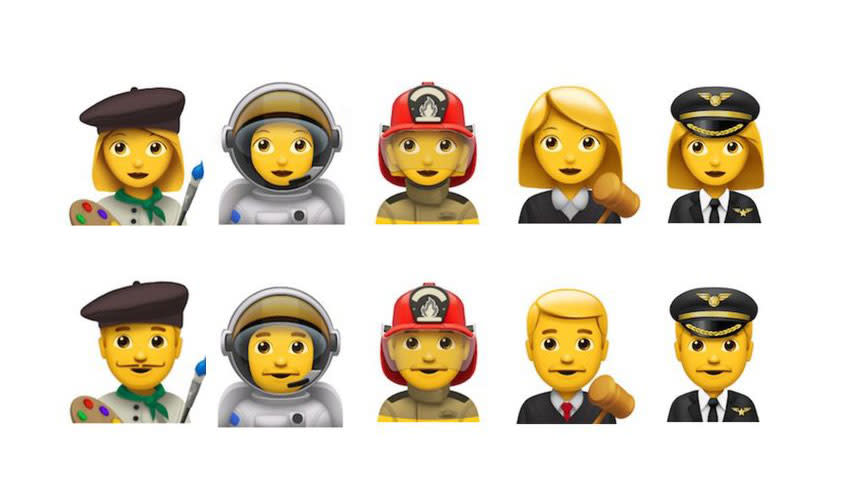 The latest proposed updates to Unicode's emoji rules add a handful of dual-gendered jobs and give basically every human emoji both male and female versions, Emojipedia reports. Those two ladies dancing in bunny ears? Now there's a male version. The policeman's face? Emoji 4.0 adds a female option. The beta of iOS 10 already showcases these changes, despite the fact that Emoji 4.0 is still in draft form for two more months, during which period the public can provide feedback to Unicode.

New emoji jobs include astronaut, cook, teacher, factory worker, firefighter, scientist, judge, pilot and artist, all with male and female options. Emoji 4.0 includes 16 new professions, which expands to 32 when accounting for both genders.

Emoji 4.0 also allows vendors like Apple, Microsoft and Google to implement a third, gender-neutral option, though this might be more difficult than a male or female swap. Unicode president Mark Davis told Emojipedia about the challenges of creating a non-gendered emoji, saying, "One of the things that designers have struggled with is what makes a form look neutral. They have a lot of difficulty coming up with a form that looks neither male nor female."

The Emoji 4.0 draft also includes a rainbow flag, United Nations flag, and it recommends skin tone support for a lineup of existing emojis, including the women with bunny ears, people holding hands, golfer and family icons.

Emoji 4.0 should go live for vendors in November and show up on public systems in late 2016 or early 2017, according to Emojipedia.

In this article: art, culture, design, emoji, emojis, gender, internet, mobile, TL18MOJI, unicode
All products recommended by Engadget are selected by our editorial team, independent of our parent company. Some of our stories include affiliate links. If you buy something through one of these links, we may earn an affiliate commission.