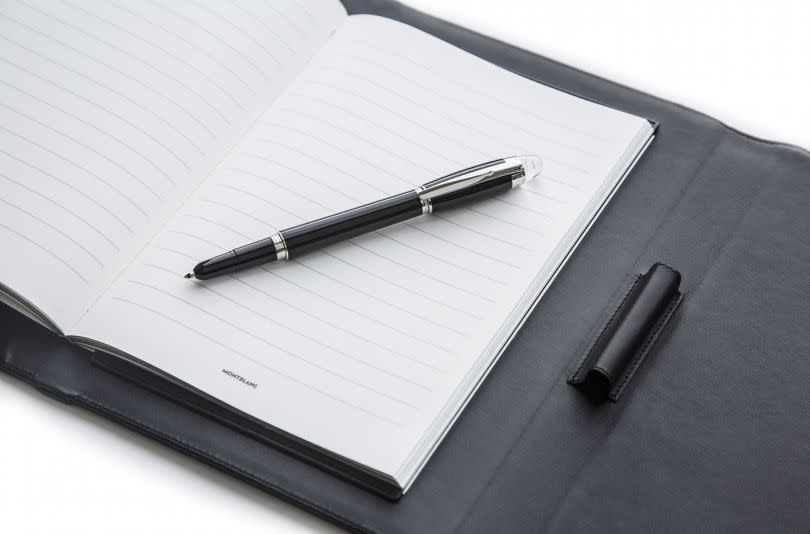 Like smart watches, it was only a matter of time before smart pens went from being novel gadgets to high-end luxury items. Enter Montblanc's new Augmented Paper pen and notebook, which the German company debuted this week at the IFA conference in Berlin.

While similar products from LiveScribe or Oree might be designed for writing buffs or modish creatives, the Montblanc is clearly going after the "note-taking international playboy" demographic here. For $725, the set includes a modified version of a Montblanc StarWalker pen plus a "black Italian leather" notebook made in Florence that you'll need to actually transfer your notes into digital form. The notebook and pen use electromagnetic resonance to digitize your handwriting, similar to how a Wacom tablet works. The set lasts about 8 hours on a charge and can store up to 100 pages in internal memory if you're writing away from your smartphone. Once the notes are uploaded to the Montblanc Hub app, you can share or store them however you like and the company also claims "best-in-class handwriting recognition" available for 12 languages.

At $725, the set is over four and a half times the price of LiveScribe's entry-level option, but kind of a steal compared to writing on your tablet with a $1,085 Montblanc stylus. It also comes with three ink refills and a USB charging cable. Appropriately enough for a luxury device, it goes on sale in the UK first, as an exclusive item at Harrods in London. In October, it becomes available in the United States, Canada, Singapore, Hong Kong and Korea, with availability in China, Japan, Taiwan, Mexico and the UAE to follow in November.

Montblanc Augmented Paper – the best of both worlds. pic.twitter.com/byHdeNWzbP

In this article: augmentedpaper, gadgetry, gadgets, gear, montblanc, smartpen
All products recommended by Engadget are selected by our editorial team, independent of our parent company. Some of our stories include affiliate links. If you buy something through one of these links, we may earn an affiliate commission.