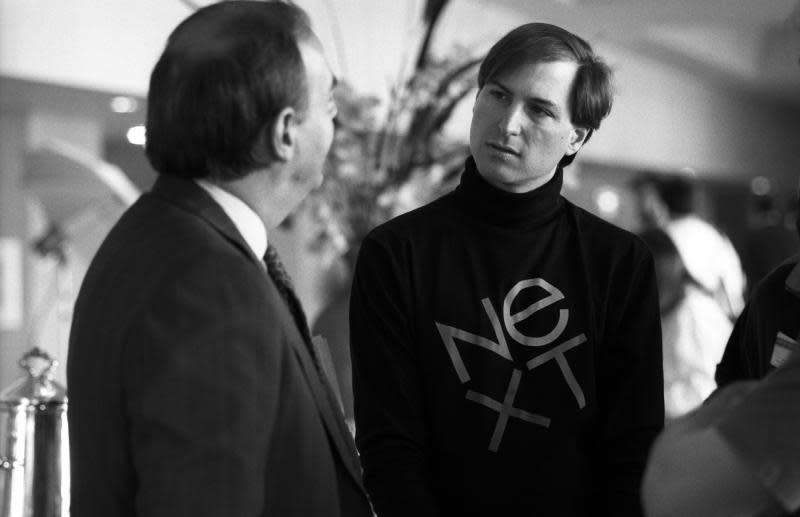 What's an Apple fanboy or fangirl supposed to do once they've filled their basement with vintage Apple hardware? Start filling up the closets with Steve Jobs' old clothes, of course. As TechCrunch reports, a whole wardrobe of the late Apple founder's shirts, bowties, watches, ID badges and other tossed-off goods are currently up for auction.

Weirdly, the items seem to have ended up in the estate of actress Jane Fonda, but they could soon be in your own very personal Jobs collection thanks to "auction house to the stars" Julien's Live. The NeXT-branded turtleneck pictured above is on the auction block, of course. But true fans of nineties-era Steve might be more interested in this full ensemble of nicely distressed Levi's, Versace button-up and Neiman Marcus bow tie (starting bid $400), this epically pleated pair of Versace slacks with matching necktie (starting bid $300), or the leather jacket Jobs wore while flipping the bird to IBM (starting bid $4,000).

On the other hand, if you really want to live the Steve Jobs way, we might suggest taking a look at his "bathrobe and electric razors" set, so you can lounge around your home feeling as though you just nailed another perfect keynote. Or, for the ultimate in ironic fanboyism, look no further than this set of five certified, Jobs-owned t-shirts commemorating everything from the founding of Standford's Computer Science department in 1965 to the 1989 launch of NeXT computers.

In this article: apple, art, auction, culture, fanboy, next, stevejobs
All products recommended by Engadget are selected by our editorial team, independent of our parent company. Some of our stories include affiliate links. If you buy something through one of these links, we may earn an affiliate commission.