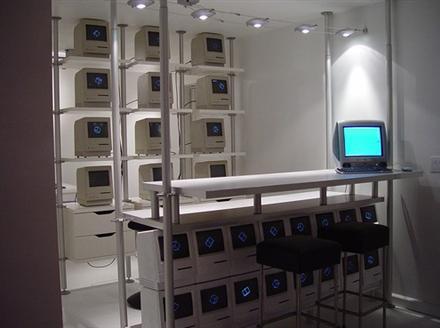 It's one thing to sacrifice your freedom to snatch 39 iPods from a retail shelf in an act of desperation fanboyism, but to devote a substantial chunk of square footage in one's ultra-modern home to Apple is an entirely different type of determination. Sure, we've seen various forms of collections before, but this edition features no fewer than 74 Mac computers, posters galore, and a dedicated bar to boot. In total, Jeremy Mehrle of St. Louis, Missouri has 30 classic Macs situated at the bar, 18 different CRT-based iMacs, various PowerMacs, a plethora of iPod paraphernalia, Mac OS boxes spanning years of development, Apple printers, Newtons, a PowerBook 165c, a Next Cube, four Apple IIs, and to top it off, a 20th Anniversary Mac as well -- and that's still leaving quite a few out. Although we can't fathom how much time, loot, and resources it took to essentially construct an Apple museum with a modernized style similar to Apple retail locations today, we can't help but give credit where its due, so here's your props Mr. Mehrle, now make sure your security system is in working order, okay? Click on through for a few more snapshots, and be sure to tag the read link for all the Mac mania you can handle.

In this article: apple, bar, collection, fanboy, home, imac, mac, mac classic, mac collection, MacClassic, MacCollection, next, next cube, NextCube, tam
All products recommended by Engadget are selected by our editorial team, independent of our parent company. Some of our stories include affiliate links. If you buy something through one of these links, we may earn an affiliate commission.
Share
Tweet
Share