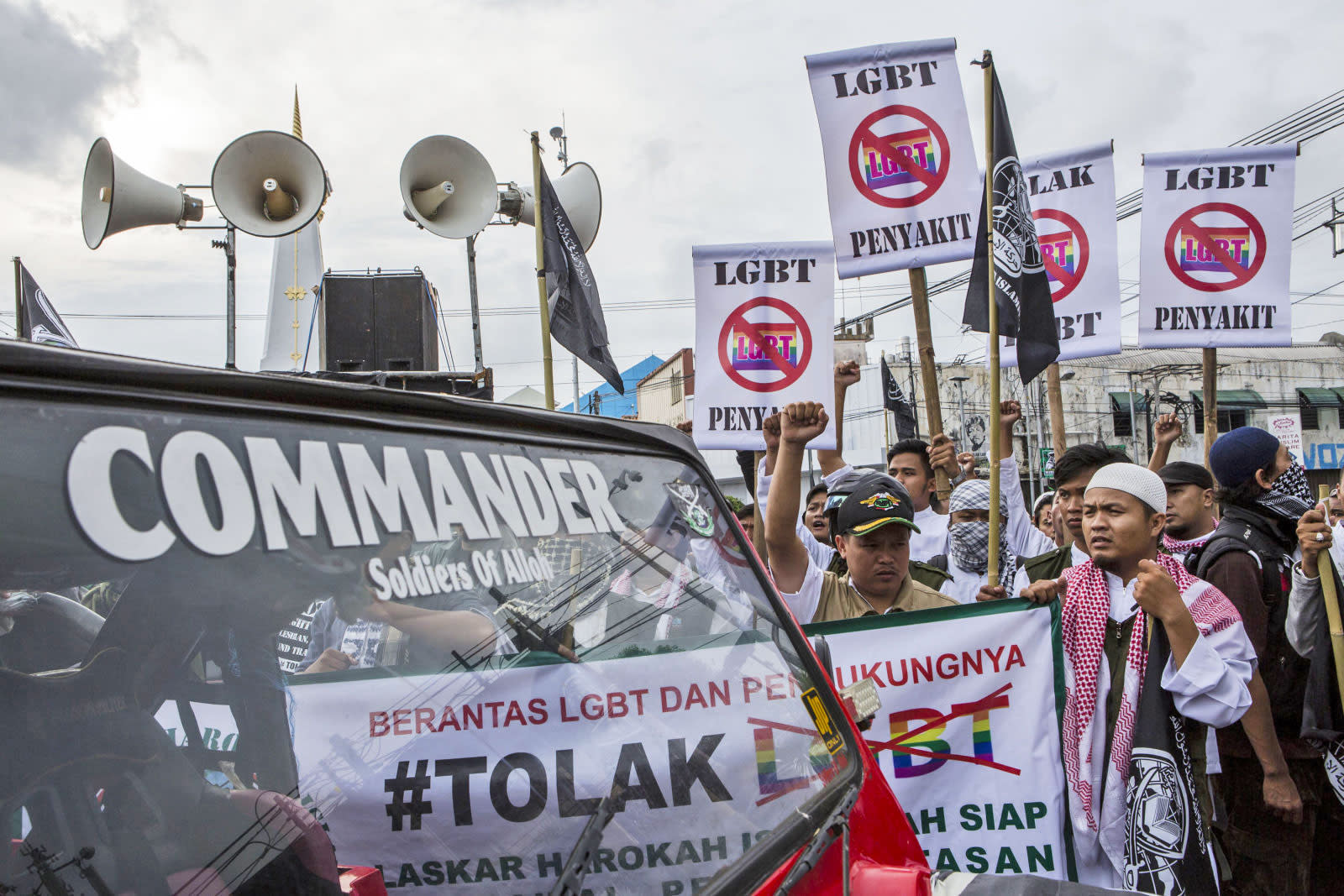 While homosexuality isn't technically illegal in Indonesia, it's extremely frowned upon in society. That extends to the digital realm, like when the country's Information and Communications Ministry pressured social app Line to remove LGBT themes and stickers back in February. While that and other government statements reportedly stoked anti-gay sentiment through the spring, they began drafting a bill to ban pro-LGBT sites in March. Yesterday, officials from multiple agencies exited a closed-door meeting at the Communications Ministry ready to block over 80 apps and websites in the country in an unprecedented crackdown.

The meeting was originally held to review a police request to block Grindr and 17 other apps they allege were used in a child prostitution ring, according to Buzzfeed, but the ministry expanded the list to include other pro-LGBT services. But the bans seem to come from a larger moral panic within the government.

"We would be pleased if the communication ministry blocked [gay apps] without hesitation because the smell of pornography is so strong on them, such as exhibiting nudity," Ericson Siregar, an officer with Indonesia's National Police Criminal Investigations Department told Buzzfeed.

Though this government action alone might resurrect anti-LGBT sentiment, others worry that this is an opening salvo to carve out US services from Indonesian internet. Communications Ministry Head of Investigations Teguh Arifiadi told Buzzfeed that they've already requested that Google remove three apps, Grindr, Blued, and BoyAhoy, from the country's Play store. They could, and likely will, proceed with takedown requests for some or all of the 80 other sites and services they reviewed.

90 percent of Indonesia's 255 million people are Muslim, and efforts to cull pro-LGBT apps and websites has been enthusiastically endorsed by religious organizations and officials. But the anti-gay pushback could be related to a greater rejection of Western values that some conservative Islamic clerics see brought in by US internet titans. True, Indonesian religious authorities are also combating the influence of radical Islam from overseas which are also using Facebook and Twitter for their own agenda. But time will tell whether the anti-LGBT online crackdown stops at curbing app and website interaction or is part of a larger campaign for Indonesia to seal its cyberspace off from influences its government doesn't condone.

In this article: apps, ban, culture, Indonesia, internet, InternetAccess, lgbt
All products recommended by Engadget are selected by our editorial team, independent of our parent company. Some of our stories include affiliate links. If you buy something through one of these links, we may earn an affiliate commission.