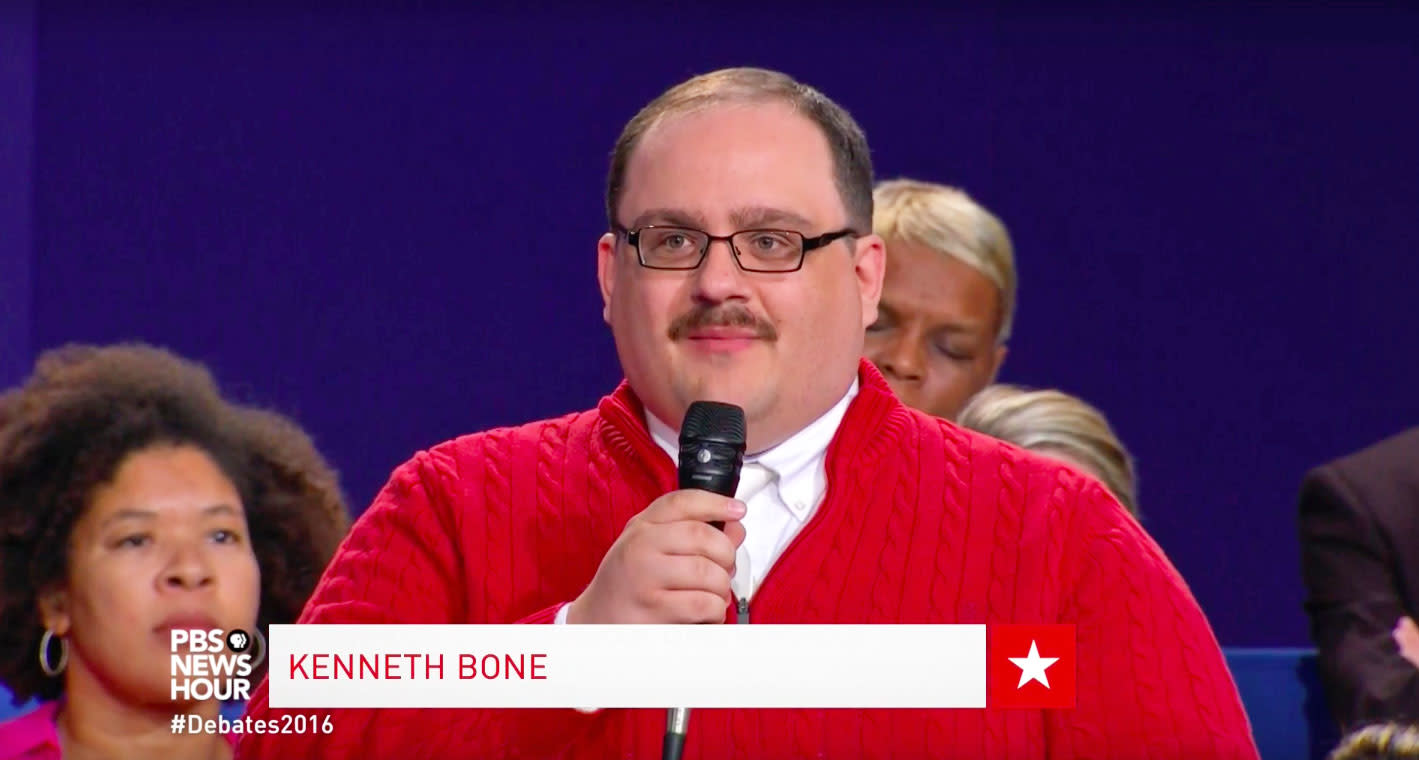 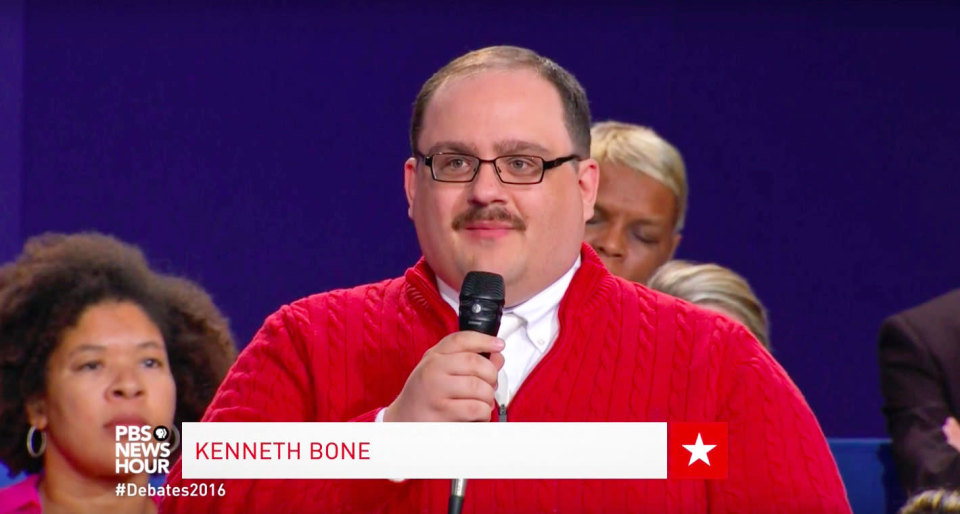 There's something magical about an inside joke. A good inside joke reminds friends that no matter what happens, you'll always have that moment when you were completely in sync, united by laughter and happy tears. Memes, meanwhile, are inside jokes on a massive scale. Memes remind the people involved of happier times, when an entire country or group of disparate people shared a moment of levity, something to laugh about, something adorable to bond over.

Throughout the cutthroat 2016 presidential election, citizens of the United States have been in dire need of a uniting force. And, during last night's second presidential debate, the people found their common ground in an affable, red-sweatered meme named Ken Bone.

Last night, undecided voter Kenneth Bone asked presidential nominees Donald Trump and Hillary Clinton a question about their energy policies, and the internet fell in love. The combination of his cheery red sweater, black-framed glasses and caterpillar mustache resonated with viewers straightaway, leading to hundreds of screenshots, Vines, videos and proclamations of admiration for America's most famous undecided citizen.

Bone rode the wave to an appearance on CNN this morning (still donning that famous red sweater) and a Twitter following of more than 30,000 (and counting). The Ken Bone meme may not make sense on the surface -- he's just a man who asked a question about energy policies, after all -- but that's precisely the hallmark of a good inside joke. That's the foundation of a viral meme.

In short, Americans are in need of a good inside joke.

Lucky for the country, modern technology has spawned the perfect ecosystem for breeding instant viral memes. First, it's easier than ever to watch the presidential debates. Last night's spectacle was aired live on television, broadcast on NPR and streamed on Facebook, Twitter, YouTube and the websites of major media outlets. Plus, given this election's extreme rhetoric and polarizing candidates, more people than ever are interested in watching these debates. The first presidential sparring match was the most-watched debate ever, securing an average of 84 million viewers on television alone.

This means more people than ever are in on the joke. During a live event, a viral meme travels like wildfire, tapping into something resonant and true for a multitude of people and instantly spreading across Twitter, Facebook, Vine, Snapchat and other social media sources. Ken Bone wasn't the only meme to come out of the second presidential debate -- after all, it was the most-tweeted debate in US election history, with 17 million people contributing to the conversation.

It certainly felt like the most memed debate ever: People added lyrics to still shots of Clinton and Trump holding up their microphones, as if they were singing a duet; they mocked Trump's apparent inability to answer a question directly; they wondered what the hell Trump was doing loitering close behind Clinton as she answered questions; they decided Trump was having sex with his chair, live on stage.

However, Ken Bone was the night's most ubiquitous meme, by far.

Perhaps that's because he's the safest. There's nothing polarizing about Ken Bone. He's a mustached man in a bright red sweater asking a question about energy policy. He's the calm, collected optimist and hobbyist bird watcher inside all of us. Most of all, he's a reprieve from the actual election. Ken Bone represents a chance for Americans to reach across the aisle and remind each other that we're in this together. Or, at least, we're laughing together. For now.

In this article: culture, dankmemes, debate, democrats, DonaldTrump, editorial, election2016, facebook, HillaryClinton, internet, KenBone, KennethBone, meme, memes, politics, presidentialdebate, republicans, SocialMedia, SocialNetworking, TL18MEME, twitter, Vine, viral
All products recommended by Engadget are selected by our editorial team, independent of our parent company. Some of our stories include affiliate links. If you buy something through one of these links, we may earn an affiliate commission.