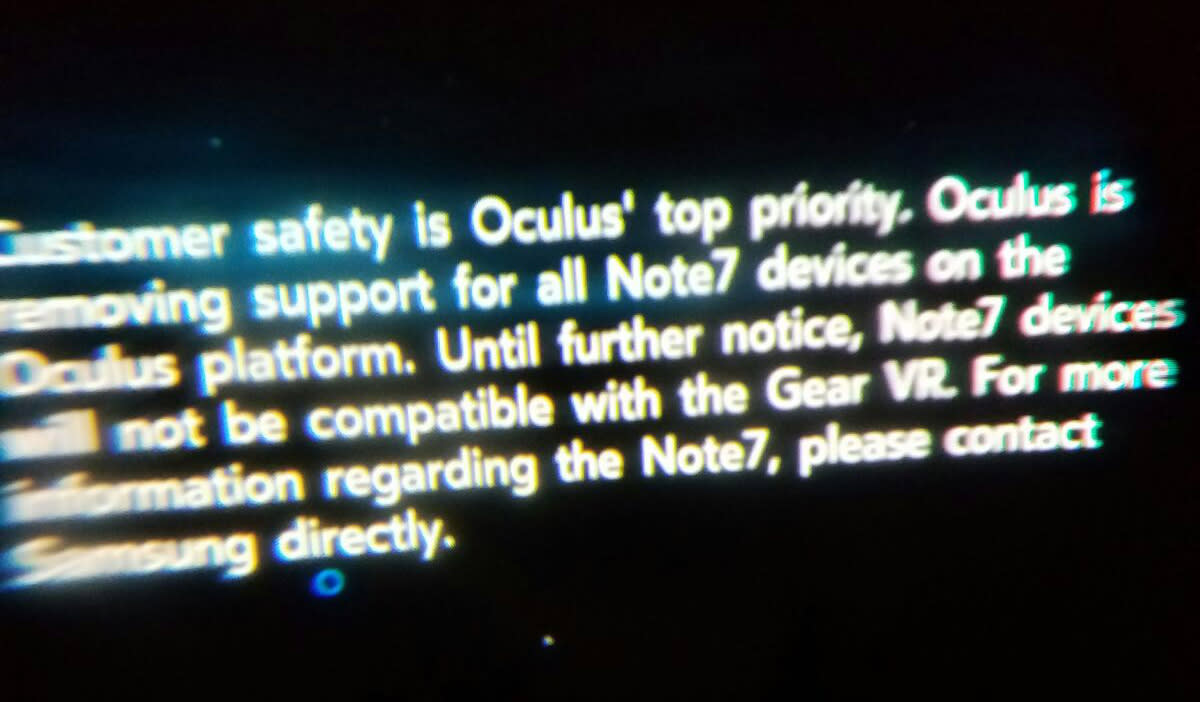 Oculus has pushed an update to the Galaxy Note 7 that disables the Gear VR app on the device, according to several sources. Instead of loading the app, it shows a message (above) stating that "until further notice, Note 7 devices will not be compatible with the Gear VR." The move is a prudent one, given the device's tendency to catch fire or even explode, and the fact that the Gear VR puts the smartphone in close proximity to your face and eyes.

Samsung has explicitly stated that Galaxy Note 7 owners should "power down and take advantage of the remedies available, including a refund at their place of purchase." The Oculus update disabling the headset was first reported by Reddit user Bahaman23 and confirmed by Android Central. Despite the danger, some Redditors are complaining that they can no longer use not only their Galaxy Note 7s, but their Gear VR headsets, too. (We've reached out to Oculus and Samsung for more details.)

You do have options with a new Gear VR, however, provided you're willing to stay in the Samsung camp (and it would be hard to blame you if you didn't). The headset supports older Samsung headsets that don't explode, including the Galaxy S7, S7 Edge, S6, S6 Edge and Note 5, according to Samsung's site. All of those devices (including the Galaxy S6 Edge, I can confirm) still work with the Gear VR. If you still want smartphone-based VR but have had it with Samsung, your best bet might be Google's new Pixel phones and the Daydream VR headset.

Update: Things have changed considerably since this article was first published, as Samsung has effectively killed the Galaxy Note 7. However, there is one relevant tidbit from Oculus -- it will refund any Oculus Store content purchased for the Galaxy Note 7 and Gear VR. Its full statement is below.

Customer safety is our top priority. While Samsung investigates multiple reports of issues on the Samsung Galaxy Note7, Oculus is removing support for all Note7 devices on the Oculus platform. For people who have bought content on the Oculus store to use with their Note7, they have the option to be refunded for that content.

In this article: app, Danger, ExplodingBattery, GalaxyNote7, gear, GearVR, Headset, mobile, Oculus, samsung
All products recommended by Engadget are selected by our editorial team, independent of our parent company. Some of our stories include affiliate links. If you buy something through one of these links, we may earn an affiliate commission.