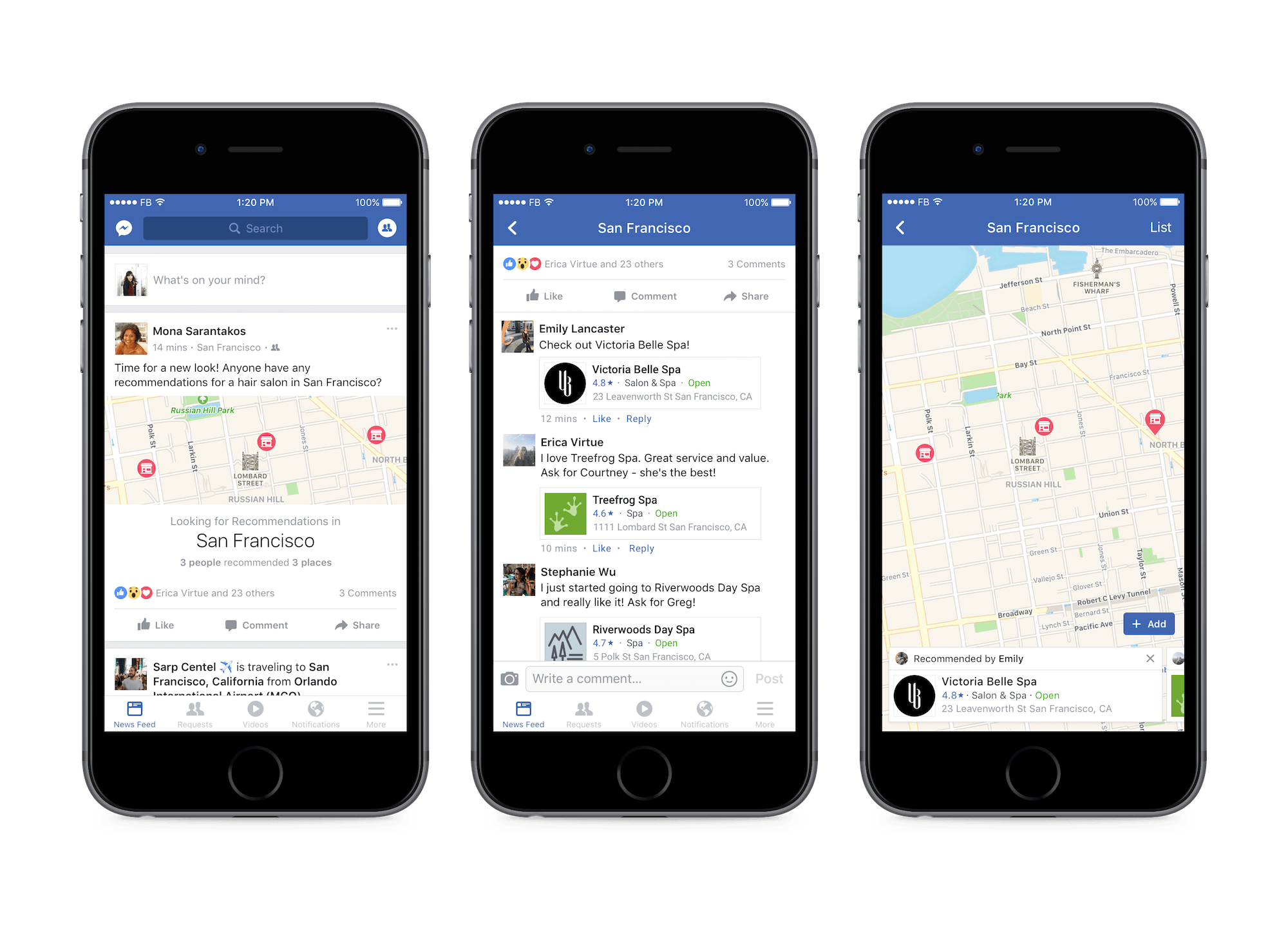 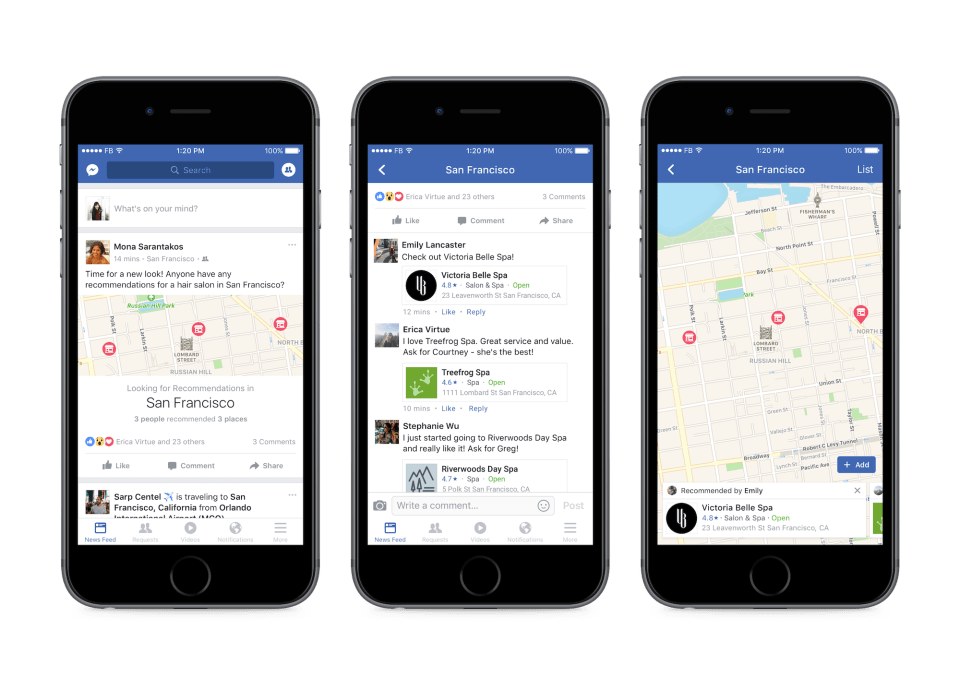 It might not feel like it sometimes, but Facebook is more than just memes or baby pictures. Many people use the social network to ask friends for ideas for places to eat in Paris or what to do this weekend. Since your pals know you, their suggestions are potentially more useful than Yelp or Foursquare. Manually compiling their answers can be messy, so Facebook is adding a feature that makes organizing recommendations much easier. If you're still stuck for something to do, the company is also giving its Event pages a revamp, to help you find out what's happening around you. Making plans is just the start, now you can book gig tickets or make appointments -- right within Facebook itself.

Unsurprisingly, the new features are part of an ongoing initiative to keep you within the social network's walls. At an event in San Francisco, the company demonstrated how the new tools help connect people with businesses that are also on Facebook. So, for example, you could find out about a concert through either Events or Recommendations (more on this later), and then you would click through and buy tickets from that concert's Facebook Page. "There's discovery, deciding and then action," said Andrew Bosworth, Facebook's VP of Ads and Business Platform.

Thanks to AI and smart keyword detection, now when you ask for advice on Facebook, the site will automatically present an option where you can turn on Recommendations. Once it's toggled, whenever a friend replies to that post and suggests, say, a restaurant, Facebook will automatically figure out where it's located and then pin it on a map. The more suggestions you get, the more the map gets populated. So now you have a handy list of places in a single post that you and your friends can add to over time. There will also be a dedicated Recommendations page on Facebook that collects all of them in one feed. Your friends' call-outs for recommendations will appear on that page too. Facebook is keen to emphasize that Recommendations isn't just for restaurants. You can use it to get advice on beauty salons, home contractors, places to see or things to do as well. I saw a demo of someone looking to find a hair salon in San Francisco, and when her friends offered a few options, links to the salons' Facebook Pages appeared immediately under their suggestions. If there are multiple locations with the same name, you can edit the suggestion to pick out the correct one. If someone recommends a business that doesn't have a Facebook Page the system still adds them to the map, according to their addresses. You can also go in and customize the map further, by adding and removing locations manually.

To piggyback on their Events app launch a few weeks ago, Facebook is also revamping the Events bookmark in the main site. Now you get to see a more tailored view of happenings that are more relevant to you. There will be an activity feed of what your buddies have been up to along with recommendations based on the kinds of events you and your social circle tends to prefer. Additionally, Facebook will curate upcoming events that are popular in your particular city or highlight the ones that it thinks you'll be interested in.

Once you've made up your mind on what to do -- whether it's getting your nails done or having dinner with family -- you can now seal the deal thanks to a few new Facebook Page features that let you interact directly with businesses. This all depends on the business in question. If it's a salon, for example, you could select "Request Time," choose from an array of different services and then it'll kick you over to Messenger to pinpoint the date and time you want. The salon could also use a third-party appointments manager like MyTime to handle the scheduling instead, in which case you'd just use the MyTime system -- which would be integrated right into the Facebook UI -- instead of Messenger.

Indeed, Facebook has already partnered with a few third parties to boost their Page interactions. For example, you can order food via restaurant Pages using Delivery.com or Slice, or get event tickets through Eventbrite or Ticketmaster. The experience will be slightly different depending on the service. Ticketmaster, for example, will hand you off to email to get your passes, while Eventbrite has a more integrated system that presents to you a QR entry code right in the Facebook app. It receives the payment information from Facebook but all transactions are processed by the service in question.

"This is not a behavior that's totally foreign," said Bosworth. "We've had a long history of messaging businesses," adding that users will likely get used to this paradigm pretty quickly. Plus, the reason why they're working with these third parties like Ticketmaster or Delivery.com is because it's much easier and faster than having to build up their own services. "Eventbrite's already doing a great job with ticketing and venues," he said. "We don't have to do that work. We can give them access to our platform. Consumers get a better experience; Eventbrite gets access to a bigger audience. Everybody wins."

Of course, the whole thing -- from social recommendations to transactions -- only happens if everyone's in the Facebook pool. And that's basically the long game that Bosworth and his team are playing here. "We're building an ecosystem," he said. "Businesses want to participate and gain access to where the people are."

And this is really just the beginning. "In a macro context, this framework doesn't fit just these products [Recommendations and Events]," he said. "But also products that we're going to be working on in the course of the next few weeks, months, even years."

In this article: culture, facebook, internet, mobile
All products recommended by Engadget are selected by our editorial team, independent of our parent company. Some of our stories include affiliate links. If you buy something through one of these links, we may earn an affiliate commission.