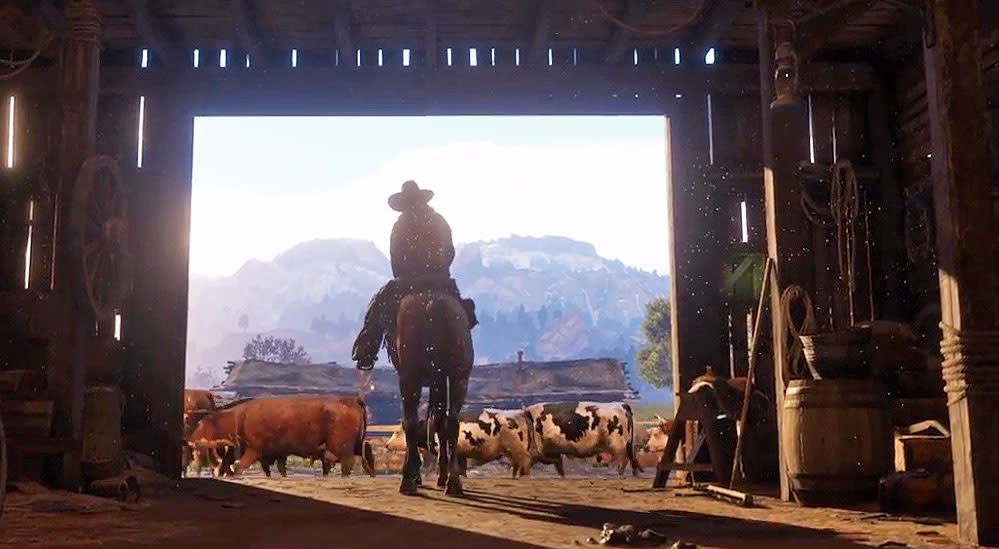 Red Dead Redemption hit the last generation of console games with studio Rockstar's signature flair, taking Grand Theft Auto's sandbox gameplay and spreading it across the boundless beauty and brutality of the American Wild West. Two days ago, a teaser poster revealed that there would be a sequel to the with a release in Fall 2017 with an ominous gang of seven gunslingers. Today, Rockstar released the first trailer for the upcoming Red Dead Redemption 2.

So, yes, little to no detail -- but at least Rockstar didn't drag fans along for a month with an ARG and still not release anything. What little we do see in the trailer is gorgeous. The poster stated the game would only come out for PS4 and Xbox One, leaving PC fans in the limbo of uncertainty, but it's hard to imagine the newly-announced Nintendo Switch tablet-console hybrid handling this graphical monster.

Update: PlayStation has announced that its partnership with Rockstar will allow PS4 players to get first access to earn select online content. Once again, that's all the details we have for now, leaving mysterious what that means for the game or its online component.

In this article: av, gaming, RedDeadRedemption, reddeadredemption2, RockStar
All products recommended by Engadget are selected by our editorial team, independent of our parent company. Some of our stories include affiliate links. If you buy something through one of these links, we may earn an affiliate commission.