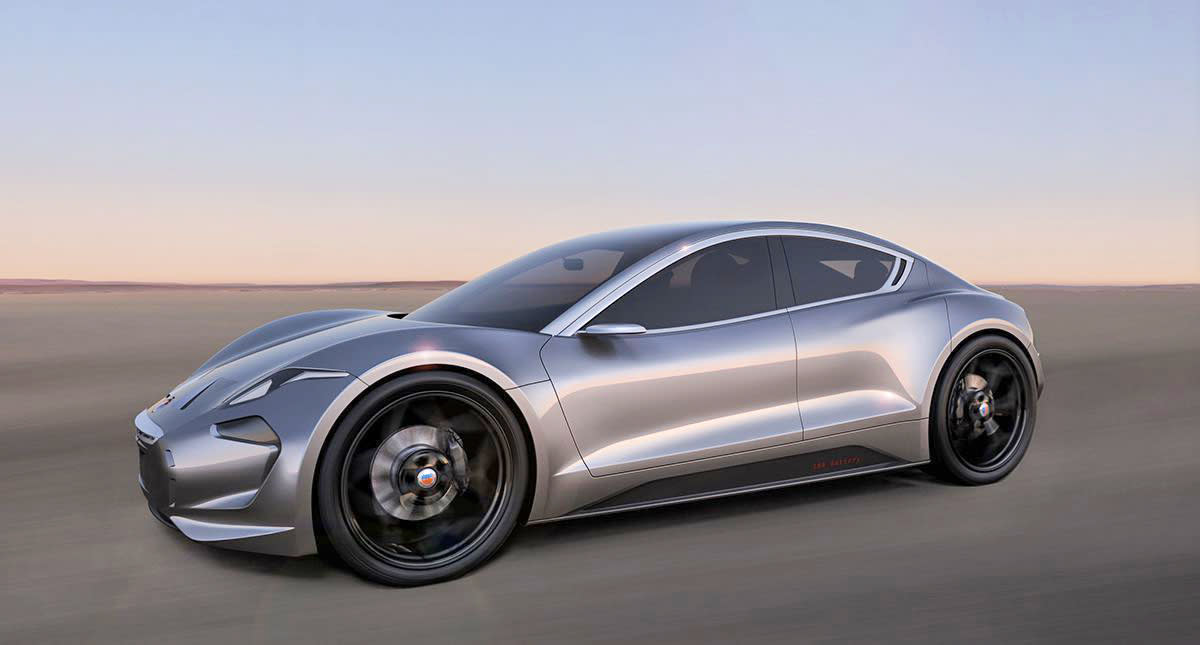 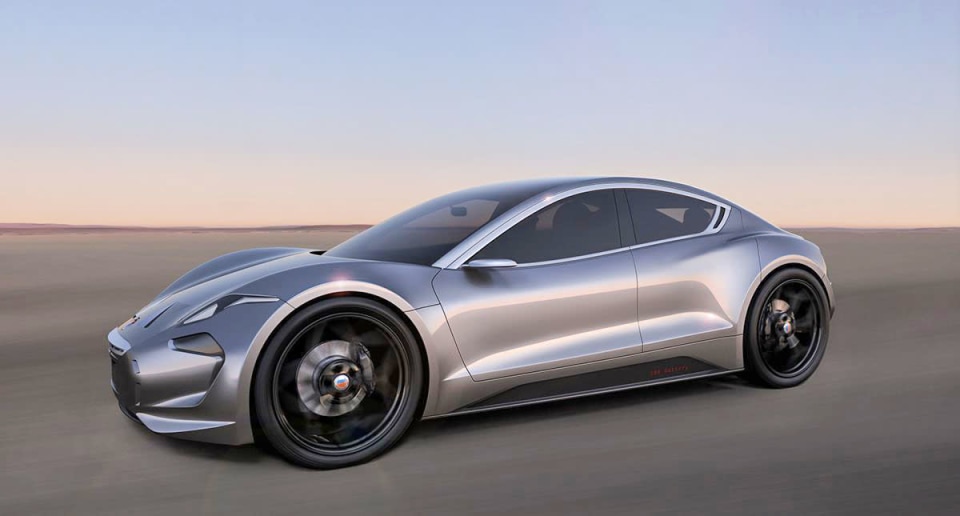 Henrik Fisker has tweeted some new images of the EMotion electric car from Fisker Inc. with a theoretical 400 mile range and 161 mph top speed. Overall, it looks like a softer version of the original Fisker Karma EV from the side, with a grill-less snout like the Tesla Model S. The technical highlight is a new type of graphene battery, under development at UCLA, that (theoretically) charges faster than a lithium-ion model. The vehicle is slated to be built at an "existing facility," reportedly in California, and unveiled in 2017.

To hit the design specs, the carbon fiber EV was designed to be as aerodynamic as possible, with a short, low hoodline, integrated spoiler and underbody diffuser. It also features adaptive LED headlights, dihedral (aka butterfly) doors and fully autonomous driving tech from a "soon-to-be-announced supplier." Fisker tweeted that the vehicle will have "superb rear legroom" despite its sports-car looks.

Technology & Emotions coming together in the Fisker EMotion. pic.twitter.com/jUfdK8aHU7

The original Fisker Karma was admired for its dramatic design, but that was the vehicle's only forte when when Leonardo DiCaprio took the first delivery in 2011. Many analysts felt it was rushed into production after Fisker's funding was cut by the US Department of Energy. As such, it was plagued by reliability problems and battery fires, making it the Samsung Galaxy Note 7 of electric vehicles.

To top it off, its battery supplier A123 went bust shortly after production started and Fisker followed it into bankruptcy soon after. The design and parts were purchased by China's Wanxiang Group, which plans to relaunch it without Henrik Fisker's involvement as the Revero.

The EMotion's design and specs are drool-worthy, if Fisker can achieve them. However, the battery design -- which is based on quick-charging ultracapacitor tech developed at UCLA -- is completely unproven. And while the butterfly doors and carbon fiber body are cool, similar features have caused quality problems for Tesla and other automakers. As such, when Fisker Inc. says that "the first deliveries will be announced after the vehicle is shown in mid 2017," take that with a boulder of salt.

In this article: 400MileRange, ButterflyDoors, ElectricCar, EMotion, EV, Fisker, gear, HenrikFisker, transportation
All products recommended by Engadget are selected by our editorial team, independent of our parent company. Some of our stories include affiliate links. If you buy something through one of these links, we may earn an affiliate commission.