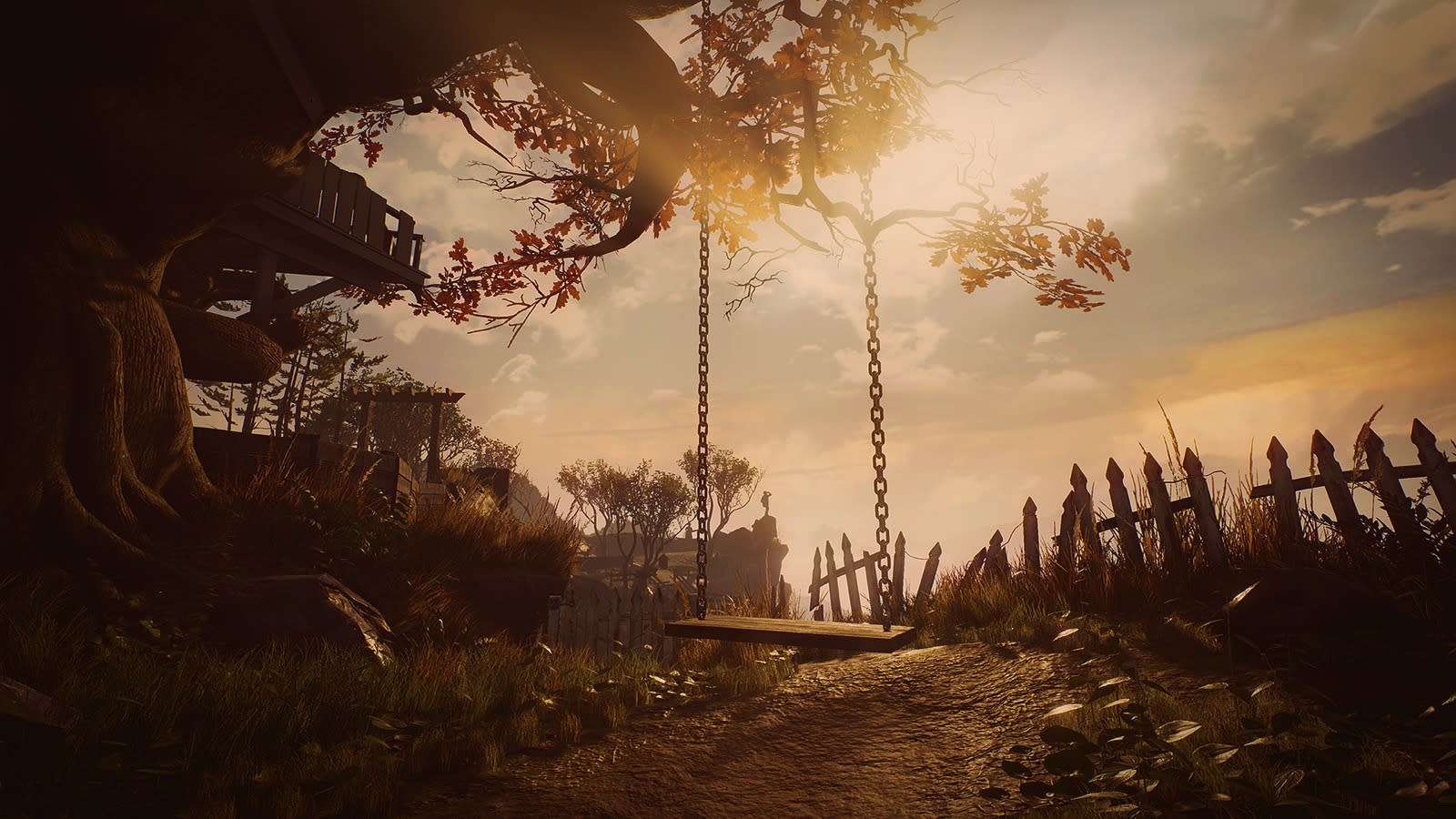 Killing children in 'What Remains of Edith Finch'

"Each story is completely different. But they all end in death."

Young Calvin Finch sits on a swing perched atop a steep seaside cliff while the afternoon sun warms the waves, grass and trees. Calvin's left leg is in a cast, but he easily swings his feet back and forth, pushing higher and higher over the cliffside. He wants to do a full circle on the swing set; he knows it's possible if he tries hard enough. Back and forth, back and forth. Cast kicking, he climbs higher, parallel to the ground and shooting back down, swinging his legs even harder. And then, with a final determined kick, he does it.

Calvin flies around and around, branches of the tree above him scratching his face and body, leaves and twigs falling to the ground. Suddenly, on the last high-velocity rotation, Calvin lets go of the chains, and his body soars over the cliff, cast and all. For a moment, he flies above the water, toward the setting sun. And then, he's dead.

"I think there's something inherently surreal about childhood," says Ian Dallas, the creative director of What Remains of Edith Finch, a first-person video game set to debut on PC and PlayStation 4 in spring 2017. Dallas is the person who dreamed up the seaside cliff, the swing set and little Calvin Finch's untimely, unintentional death.

What Remains of Edith Finch is obsessed with death. It feels more like a collection of short stories, each one about the mysterious demise of someone in the Finch family. The Finches are cursed: Beginning in the early 1900s, family members have been killed in strange, seemingly impossible ways, often at young ages.

Today Edith Finch is the last of her name, and she's convinced something is amiss in her life, so she travels to her family home in Washington to dig through her ancestral history.

Edith prowls through rooms and secret passageways that have been preserved like tombs for generations, with family members' possessions frozen in time. One of these shrines is Calvin's bedroom, once shared with his twin. Calvin's side is bright and playful, featuring a space-exploration theme, including stairs that lead to a spaceship cockpit and an astronaut helmet.

Under the helmet is a letter from Calvin's twin, explaining who Calvin was, how he lived and how he died. This is where the cliffside scene takes over the screen and players become Calvin, sitting on the swing set, kicking his legs as the letter is narrated over the tranquil scene. Press the controls forward and his legs pump forward; press back and his legs swing back.

It's no secret that these motions will lead to Calvin's death. What Remains of Edith Finch's conceit is perfectly clear: This family is cursed, and these people will die. Yes, even the children. Still, the cliff is so peaceful and the motion so intoxicating that it feels OK to make Calvin swing higher and higher. Even though the player is effectively killing Calvin, everything feels right.

This is the tone that Dallas wanted to infuse into What Remains of Edith Finch: surreal joy and childlike wonder.

"It helps to set the players' expectations up in the way that we want," Dallas says. "There's a reason we ended up with a lot of stories that ultimately deal with children. It was a little tricky with the Finch family tree, making sure people lived long enough to be able to have kids."

Dallas isn't a sadist with a penchant for fictional murder. What Remains of Edith Finch respects death in the same way it respects life. Every one of the death scenes is a sort of happy, fulfilling victory for the starring character rather than a tragic end.

"There's death but there's also -- in each of these stories, you as a player are coming into contact with the unknown because you have no idea what's going to happen," Dallas says. "Each story is completely different. But they all end in death."

In this way, What Remains of Edith Finch holds a mirror to reality. Real life is filled with billions of unique stories that all, ultimately, end in death. But the game's approach to these scenes -- making each passing joyful, intriguing and beautiful -- is cathartic, not morbid. Dallas' studio, Giant Sparrow, wants to make the world stranger. It started with The Unfinished Swan, a breakout independent game published by Sony Santa Monica in 2012, when Dallas and his team were still in school. Now Giant Sparrow is working with Annapurna Interactive, the new video game publishing endeavor from the film studio behind Her and American Hustle.

While designing What Remains of Edith Finch, Dallas was inspired by HP Lovecraft and Jorge Luis Borges, short story writers with a penchant for strange, supernatural horror scenes. The game is also (accidentally) reminiscent of another recent indie hit: Gone Home.

"It's a young woman coming back to her family home in the Pacific Northwest in relatively modern times," Dallas explains. "That's a small pool. For us, I think it's particularly great because the game is so different than Gone Home. ... Anytime people have an expectation, that gives us an opportunity to circumvent that and give them a little bit more of the unknown, which is so hard to find in the real world."

The real world is insistent on making people feel comfortable, Dallas continues. What Remains of Edith Finch aims to infuse a little discomfort into our everyday lives.

"I would hope that people have a memorable experience," he says. "When I think back on my own life, the things that I remember are usually not when things are going well. Often, there's some disaster but then it ends up being OK."

It's simple to make people uneasy in a game about killing children. Balancing that discomfort with happiness is where things get tricky. Giant Sparrow made sure to beta test What Remains of Edith Finch with parents, especially new ones; these people tend to have a different reaction to the game than childless players, Dallas says. They're simply more sensitive to images of children dying -- which is one reason What Remains of Edith Finch doesn't talk about death directly. It shows death, but it doesn't focus on the concept. Instead, it highlights the journey: the sun's warm rays on the grass, the beautiful tree, the euphoria of swinging.

"All of these stories are about people being successful," Dallas says. "They're not the victim. Generally, they're the people that are out there, causing the problem. They're all pyrrhic victories -- each story, it's become this definitive, Finchian moment of knowing that you're about to do something terrible but marching joyfully to your inexorable end."