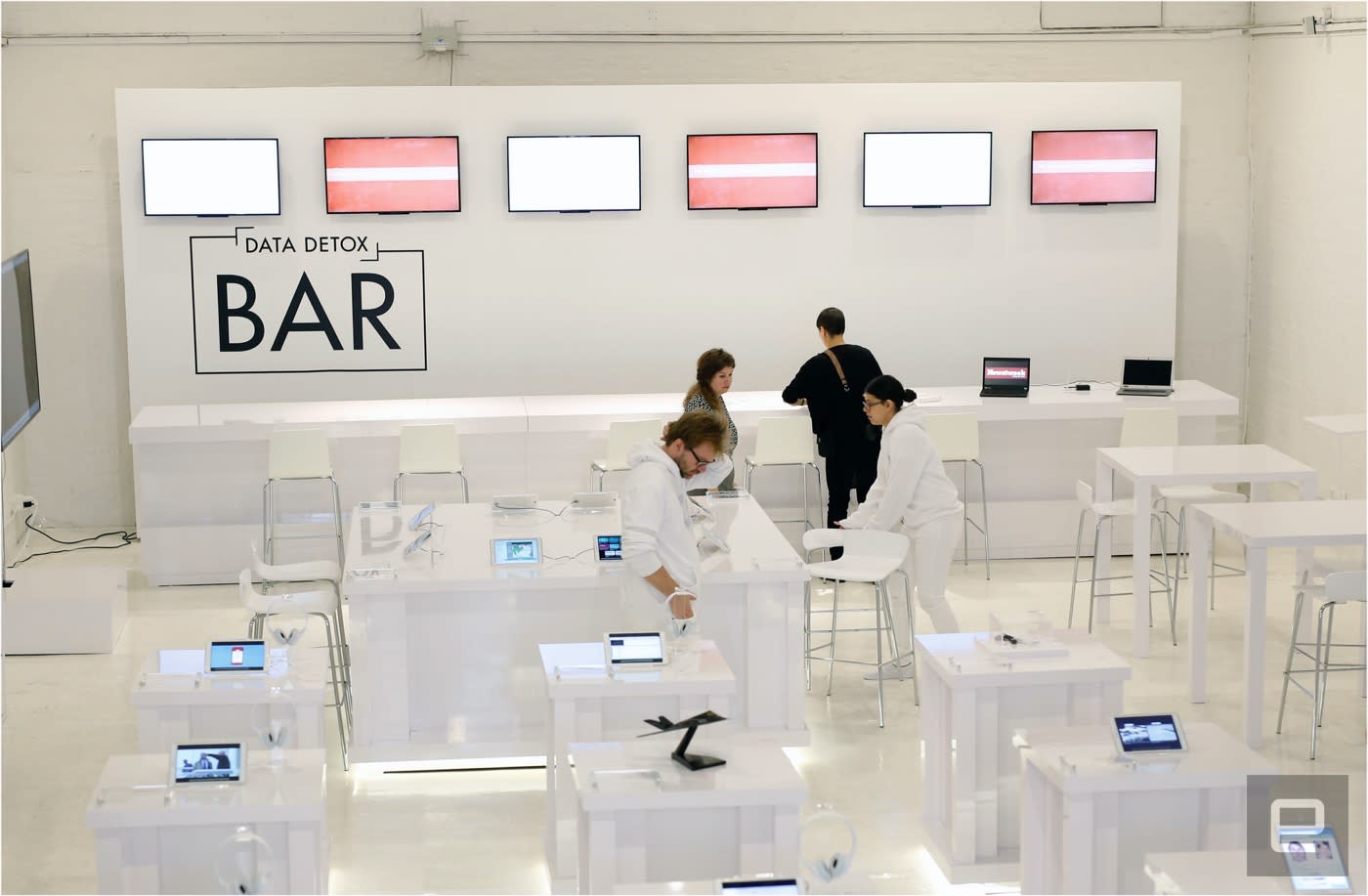 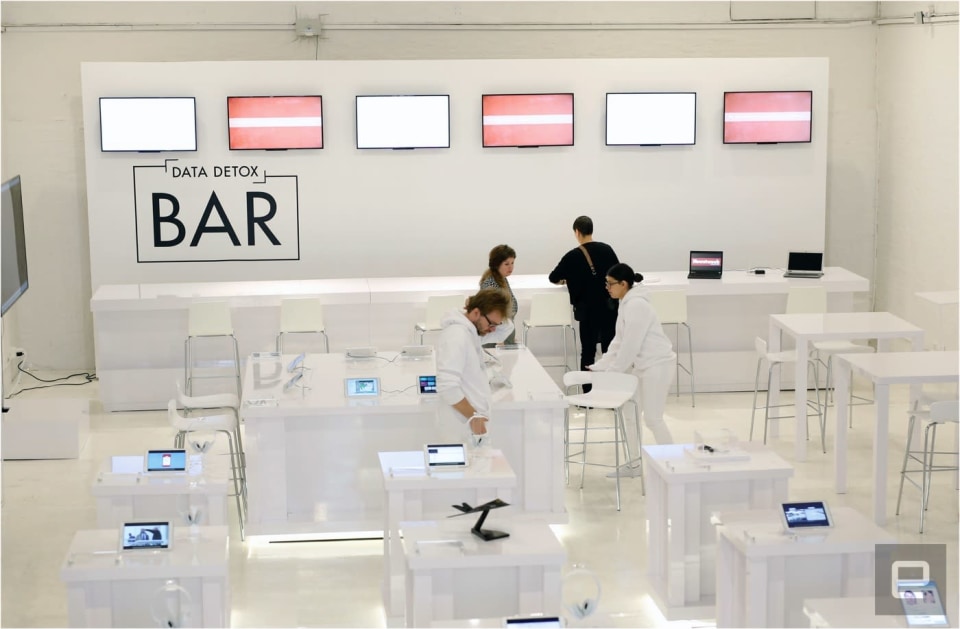 For a few moments after stepping in from the cold, it was easy to forget I wasn't in a ritzy SoHo holiday pop-up shop. The room was stark white. Cheerful staffers huddled around display tables in matching hoodies. It wasn't until I spotted a set of tomes filled with stolen LinkedIn passwords -- just feet away from a pair of Air Yeezy 2s purchased off the deep web by an automated bot, naturally -- that the space's true purpose became clear.

Welcome to the Glass Room.

Designed by Mozilla and the nonprofit activists behind the Tactical Technology Collective, this exhibit serves as both a commentary on consumer culture and a primer on the pitfalls of living our lives online.

The first of the 54 items on display here seem a little absurd, and that's by design. Consider the Unfitbit. It's a Fitbit strapped to a metronome, designed by Surya Matty and Tega Brain to disconnect the physical you from the quantified exercise that gets collected by companies and nets people discounts on their insurance. Beyond that lies an array of cloth samples shoved into tiny mason jars. As it turns out, they're from an honest-to-goodness startup called Smell.Dating that -- you guessed it -- attempts to hook people up based on their individual aromas. Throw in all those LinkedIn passwords exposed during a 2012 breach -- and those sneakers -- and you've got a fairly benign starting point for an exhibit that becomes surprisingly creepy. That creepiness settles in once you head down the stairs, where the space begins to show off products that are actually being sold. My churchgoing days are long behind me, and it's just as well -- one exhibit showed off how a bit of software from a facial-recognition-software vendor monitors live video feeds to see who showed up for that week's service. Nearby was a simulated video feed of the US-Mexico border -- bought, built and used by the state of Texas -- monitored by some 200,000 volunteers hoping to catch drug deals in action and undocumented immigrants on the move.

Nearby lay a slew of sensors collectively called Silver Mother. These were designed to attach to pill bottles and beds and doors to help worried children more easily check up on their aging parents. It's the sort of seemingly innocuous tech that eager startups pitch all the time, but co-curator and TTC Executive Director Stephanie Hankey said these products were prime examples of how surveillance has become normalized. These days, she says, Big Brother doesn't have to be a faceless force peering into our lives. As Hankey put it, monitoring each other has "become more banal, bureaucratic and simple," to the point where we sometimes willingly assume the role ourselves. The whole experience is sickening, in a poignant, even helpful, kind of way. Upon completing a few laps around the space, there were two thoughts that not even a trip to the Detox Bar -- where "inGeniuses" offer workshops on how to be a more secretive, savvy web user -- could shake.

First, you can't help but feel like a sucker here. Like everyone I know, I use Google to figure out every little thing -- and in so doing, give the company a thorough portrait of my interests and habits. I use apps to log the things I eat and how much I move and the places I go and the places I want to go. I trust that the companies to which I give this information won't do anything nefarious with it, but even when I don't, I give them my data anyway, in exchange for convenience. I'm not alone, either: These services have become woven into the fabric of modern life to the point where opting out can feel almost a little suicidal. Second, have we reached the point where we create so much data that it's impossible to manage all of it responsibly? Hard, reliable numbers are tough to come by, but to paraphrase Douglas Adams: "You just won't believe how vastly, hugely, mind-bogglingly big" the amount of data humanity produces each year is. Because of the sheer volume of just the data you personally generate, and the many services we entrust with that data, there's isn't really a way to ensure we're secure from end to end.

After all, how many apologetic emails have you gotten from stores whose payments systems were breached, or from massive tech companies whose infrastructures fell prey to malware and savvy hackers?

That's not to say that trying to individually safeguard our personal data is a fool's errand. But with news story after news story highlighting breach after breach, it sometimes feels like all we can do is minimize potential damage. This exhibit is bound to open some people's eyes to truths they might not have been ready for, but the Glass Room wasn't specifically designed to be a downer, either. Rather, Hankey and her colleagues wanted to craft an experience that would elicit a mix of laughter and latent dread.

"We did that to make people realize they can embrace this without going, 'Oh my God, this is a terrible world,'" she said. "They might think that, but we're not trying to present it that way. On the other hand, I think that people should and will find their own entry point to these questions. Everyone has a different reason to care about these issues. That's why we have a breadth of content -- to try to find a place for each person to connect with it in their own way."

The Glass Room is located on 201 Mulberry Street in NYC, and runs through Dec. 14th.

In this article: art, culture, glassroom, mozilla, newyork, newyorkcity, privacy, security, tacticaltech, ttc
All products recommended by Engadget are selected by our editorial team, independent of our parent company. Some of our stories include affiliate links. If you buy something through one of these links, we may earn an affiliate commission.