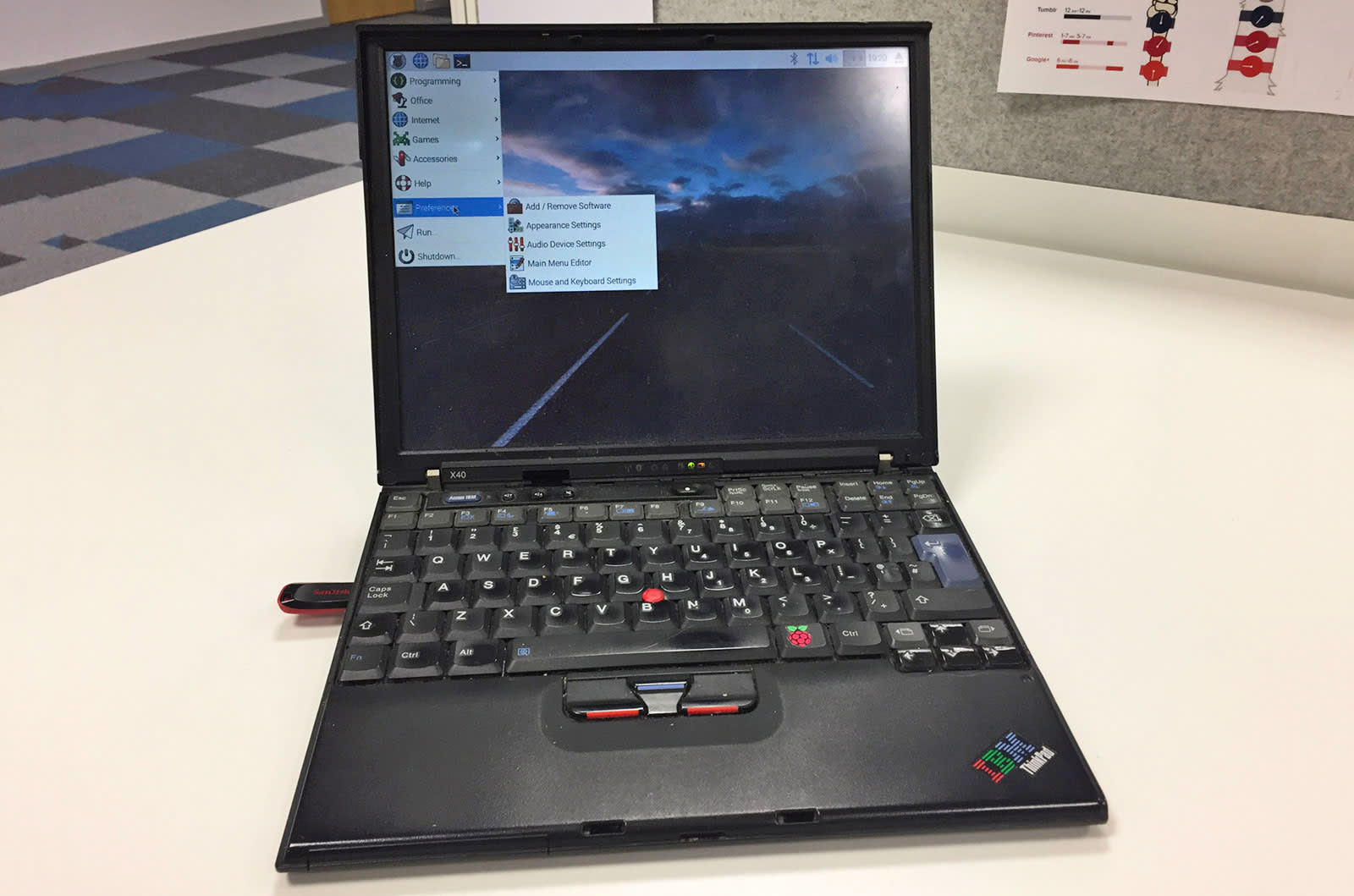 The Raspberry Pi Foundation has released an experimental version of its Linux-based Pixel OS for Windows and Mac PCs. The OS, originally designed to run only on the Raspberry Pi hobby board, comes with the Chromium web browser and a suite of productivity and coding tools. "We asked ourselves one simple question: If we like Pixel so much, why ask people to buy Raspberry Pi hardware in order to run it?" founder Eben Upton wrote in a blog post.

Built on top of Debian, the OS is light enough to run most old machines, provided you have at least 512MB of RAM. "Because we're using the venerable i386 architecture variant it should run even on vintage machines like my ThinkPad X40 (above)," Upton said.

It's easy to try out, but Upton urges you back up machines that may have valuable data. After downloading the image, you burn it either to a DVD or USB stick, then enable booting of those devices. You can normally do that by tweaking your PC's BIOS or by holding the "C" key down when you boot up a Mac.

From there, it'll run the OS with no need to install anything. If you booted on a USB stick, you'll get the option to run "with persistence," meaning any changes or files will stick for the next session. If you'd rather just play around and start fresh next time, you can run without persistence or reset it. As mentioned, you get a full suite of apps and a browser, but unlike with the Pi version, there's no Minecraft or Wolfram Mathematica because of licensing issues. There are plenty of lightweight Linux distros for older PCs (including Debian itself), or you could use Neverware, which turns your old laptop into a Chromebook. However, the Pi Foundation supplies a lot of useful Linux apps with Pixel, and aims to make it as easy to use as possible. By porting it to desktop machines, Upton also feels "we can more easily see where [the operating system's] weak points are and work to fix them [on the Pi]."

The group thinks it could be a perfect for schools (where the Raspberry Pi already has a big foothold) to help students learn programming and various apps. The idea is that they can learn at school, then using the persistent boot option, continue working at home with exactly the same setup.

As mentioned, the Pixel OS is still in the experimental stages, and doesn't run on all machines. On his own modern Mac, Upton said, "the machine fails to identify the image as bootable." They'll be releasing more updates going forward, but if you're interested in giving it a try, you can hit announce post to find it.

In this article: Debian, gear, OS, PC, personal computing, personalcomputing, Pixel, RaspberryPi, TL16OLDCOMP, x86
All products recommended by Engadget are selected by our editorial team, independent of our parent company. Some of our stories include affiliate links. If you buy something through one of these links, we may earn an affiliate commission.