Not nearly as exciting as the electric BUDD-e microbus the company introduced a new version of it's electric compact, the e-Golf Touch at CES. Odd that it's called the Touch because the feature that makes it different from the regular e-Golf is gestures. Maybe e-Golf Swipe didn't play well with focus groups. Regardless, the car comes with a 9.2-inch configurable home screen and wireless charging for everyone in the car. 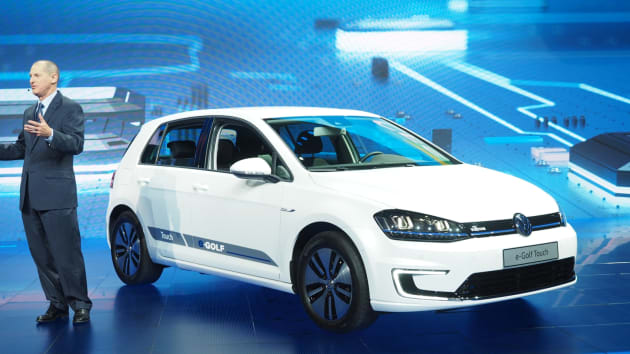 The not-quite-in-production-yet vehicle is being used to showcase both the gesture controls and modular customization of the company's infotainment system that will be rolling out to other vehicles in the future.

The customized screen consists of two "tiles" that can be placed in any configuration a driver wants based on the 10 options available that include media and phone. An individual layout can then be saved for individual drivers for vehicles that are shared. Volkswagen is taking that one step further and said in the future (before next year's CES), you'll be able to take your infotainment layout to other VWs.

The car will also support Android Auto and CarPlay.

The e-Golf Touch will also be the first vehicle to get VW's updated voice control system. The company said the system has improved controls and shows what you're saying (or what it thinks you're saying) on screen.

The car is also getting inductive charging in the front and backseats for wirelessly power devices that support it. The car will be available later this year.

In this article: ces2016, e-golf, e-golftouch, gear, gesturecontrol, inductivecharging, mobile, transportation, Volkswagen
All products recommended by Engadget are selected by our editorial team, independent of our parent company. Some of our stories include affiliate links. If you buy something through one of these links, we may earn an affiliate commission.