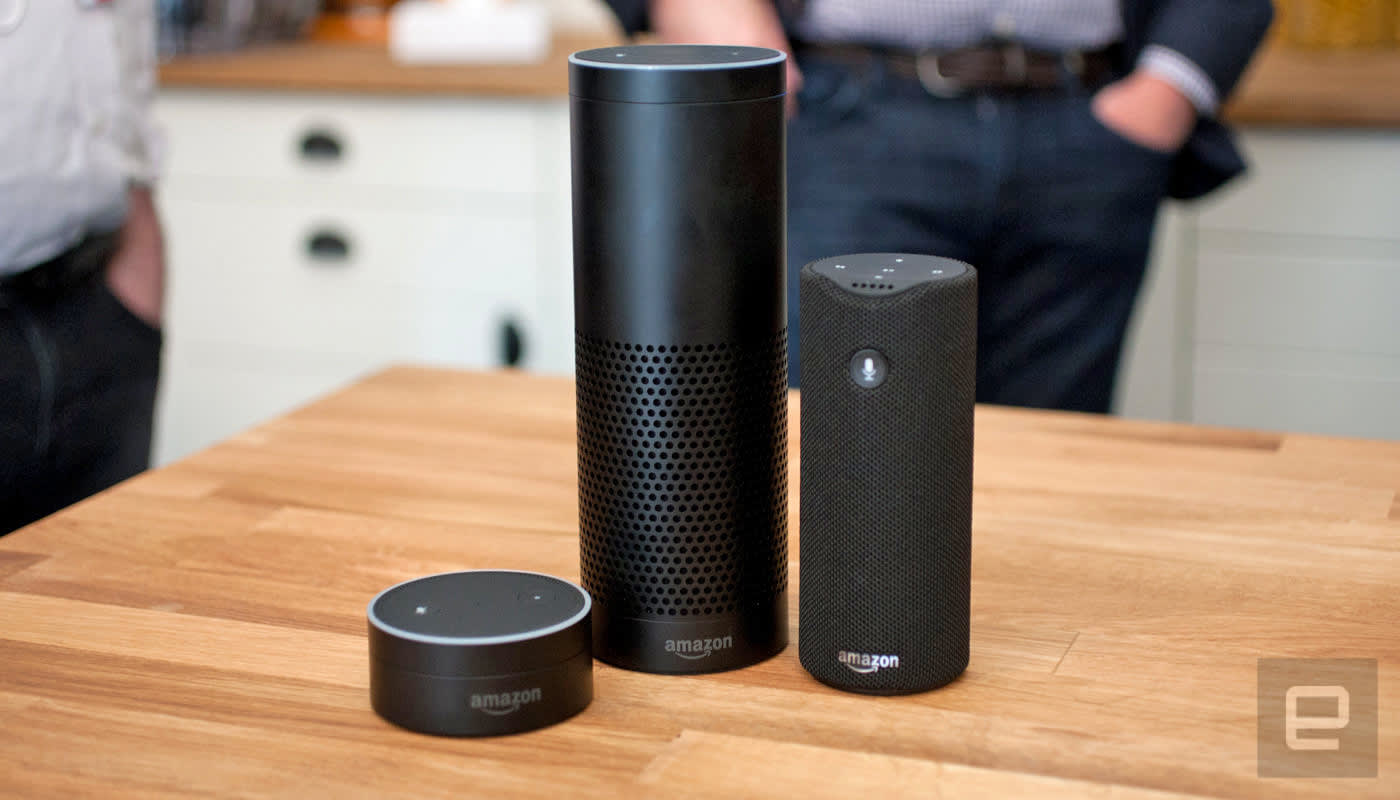 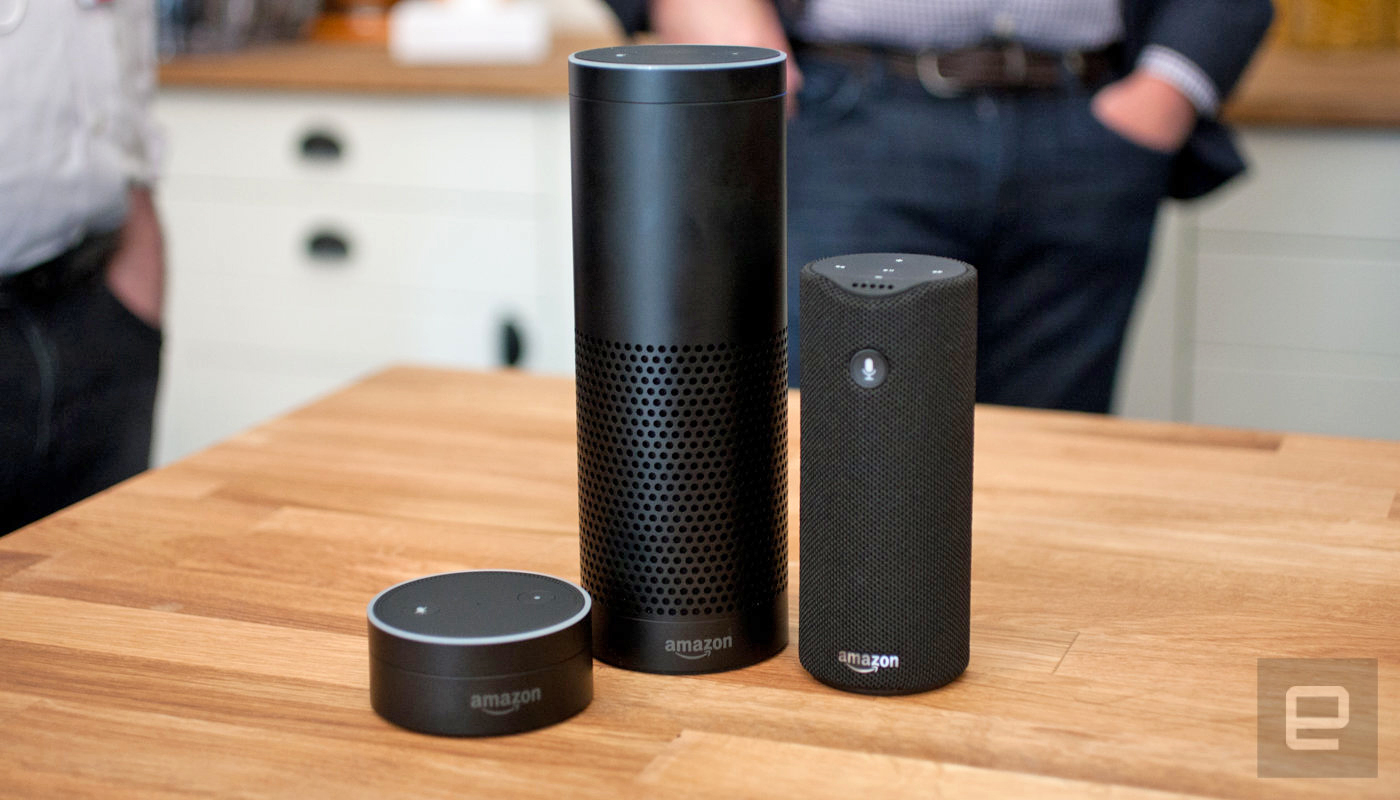 Amazon has announced two new Alexa-enabled devices that do most of the same tasks, but look completely different. The Echo Dot is a stubby version of the regular Echo while the Amazon Tap is a Bluetooth and WiFi speaker that supports voice commands. The diminutive Echo Dot looks less like the Echo tower and more like a hockey puck. Amazon says that one of the main requests from current voice-assistant owners is the ability to plug it into another speaker. To that end the online retailer has removed the music-playing speakers (there's still a small speaker inside for voice feedback and alarm functions) and added an audio port. 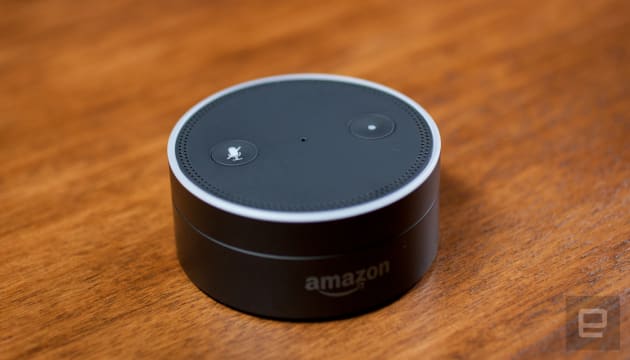 Other than its small stature, it has all the same features as its larger sibling including the seven-microphone array, volume ring, mute and action buttons. It also works with all third-party services including newly added support for thermostats from Nest, Honeywell and Insteon. For tunes on the go, or at home, Amazon is jumping into the wireless speaker market.

The Amazon Tap Bluetooth and WiFi speaker also supports Alexa voice commands, but you'll need to press the mic button to initiate speech recognition. But because it supports voice actions, it streams Spotify via your wireless network without having to sync with a smartphone. To kick out the jams, it has two speakers for omni-directional Dolby-processed sound. It's made to be portable, with nine hours of playback time and three weeks of standby on a single charge. 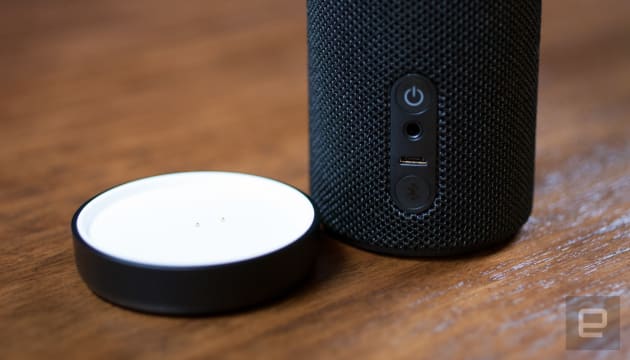 The Tap sits atop a slim charging dock and has control buttons for volume and skipping forwards and backwards through songs. 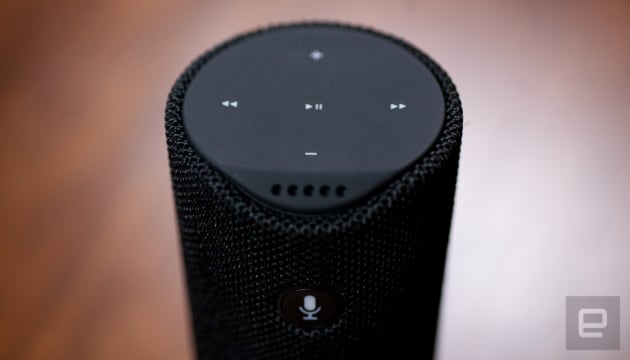 Both devices are available for preorder today and will be shipping later this month. The $129.99 Amazon Tap is available for anyone to purchase. The $89.99 Echo Dot on the other hand is only available for purchase via Alexa Voice. So you have to own an Echo (okay, or a Fire TV) to buy an Echo. The company says it has limited stock on hand at launch. Plus, it's an opportunity for Amazon to see how users interact with a Dot in a home already using an Echo.

No word on when the Dot will be available for everyone to purchase. But it's important to note that it does work on its own without a full-size Echo.

In this article: Alexa, amazon, AmazonEcho, AmazonTap, Echo, EchoDot, gadgetry, gadgets, gear, home, internet, mobile, services
All products recommended by Engadget are selected by our editorial team, independent of our parent company. Some of our stories include affiliate links. If you buy something through one of these links, we may earn an affiliate commission.