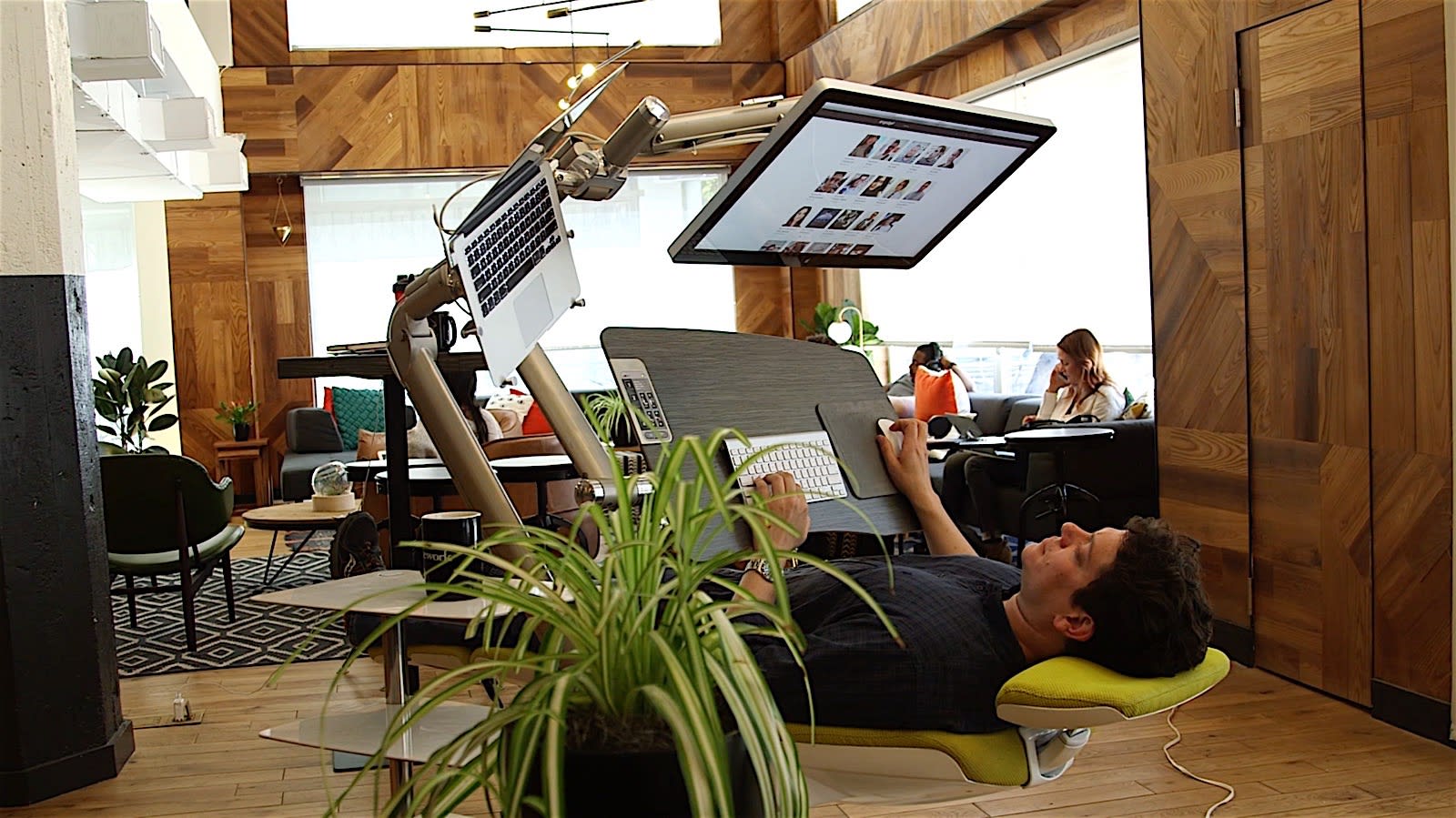 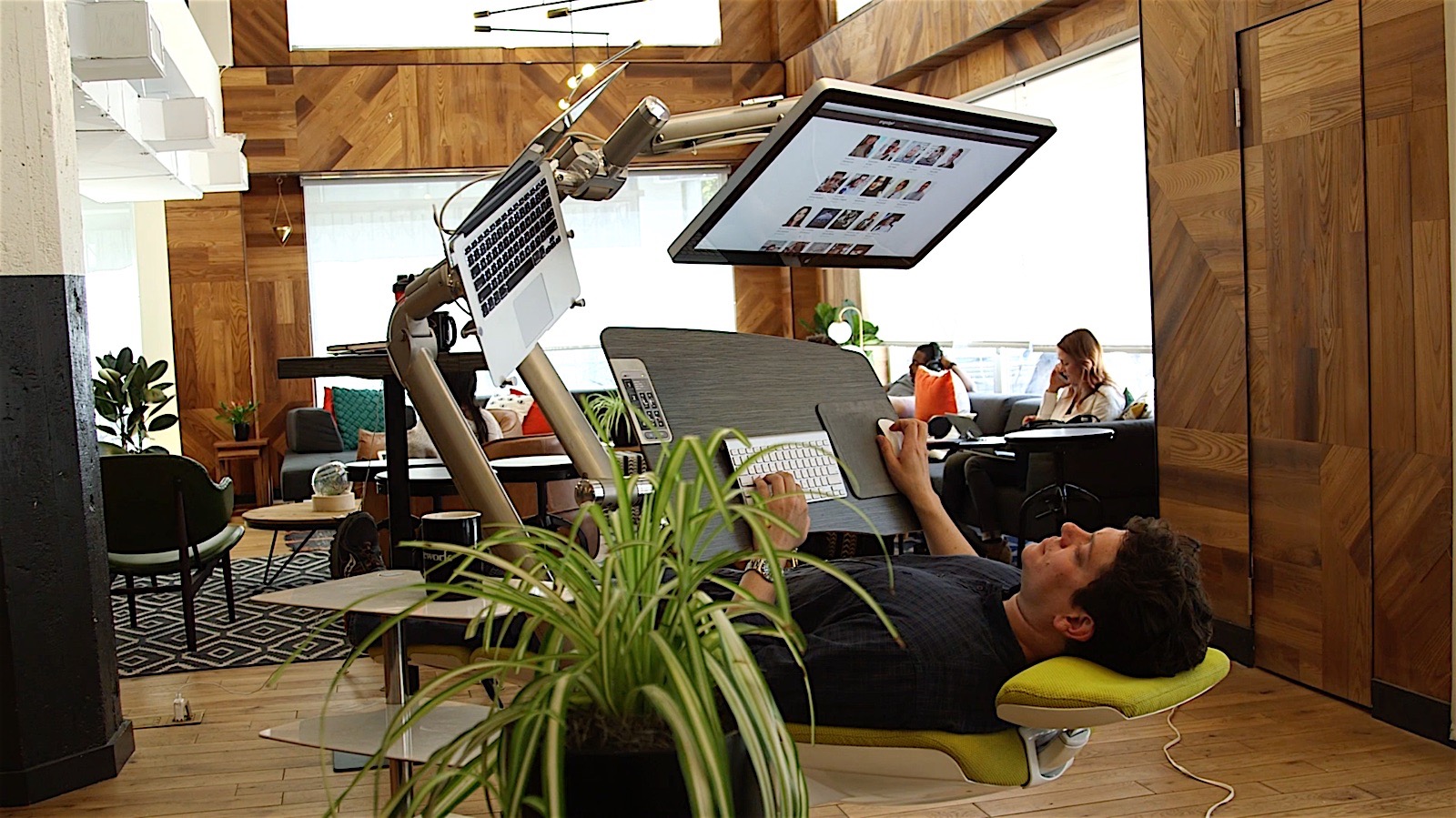 Our computers have rapidly shrunk from room-size behemoths to hulking desktops to the svelte laptops that now dominate modern offices. What haven't changed much are the tables and chairs that the computers (and we) sit on. A new integrated workspace from the Altwork company, appropriately named the Station, has been designed to replace both pieces of furniture while giving you more flexibility in how you interact with your computer. I was recently able to get a butts-on demo of the Station, and the only contortion I had to perform was wrapping my mind around its massive price tag.

At first glance, the Station resembles a fancy dentist's chair with a pivotable tabletop attached to the front. Its leg rest coils under the seat like an inverted scorpion's tail when not in use but will nearly straighten when fully extended. The entire thing rides on casters and weighs only 210 pounds (without a monitor), so it is relatively easy to move around and reposition. That's not something one could easily do on an old-timey rolltop. Additionally, the tabletop, monitor stand and optional upper laptop mount are all adjustable for maximum ergonomic efficiency. This allows you to "fit" the Station to your specific needs, and once you do, these settings can be saved in one of four user-programmable presets.

The Station can transform between four basic functional positions. It can serve as both a conventional seated desk and a standing desk. If you swing out the monitor and tabletop, it becomes a collaborative workstation. And if you get serious about your workflow, the Station's "focus" position will put you flat on your back with the monitor and tabletop (not to mention your keyboard and mouse) suspended above you. When I was seated like this during a recent demo, it was quite comfortable, though I didn't feel more productive so much as just really silly and self-conscious. The fact that I was splayed out on this thing like a portly harbor seal in the middle of a crowded We Works probably didn't help either. 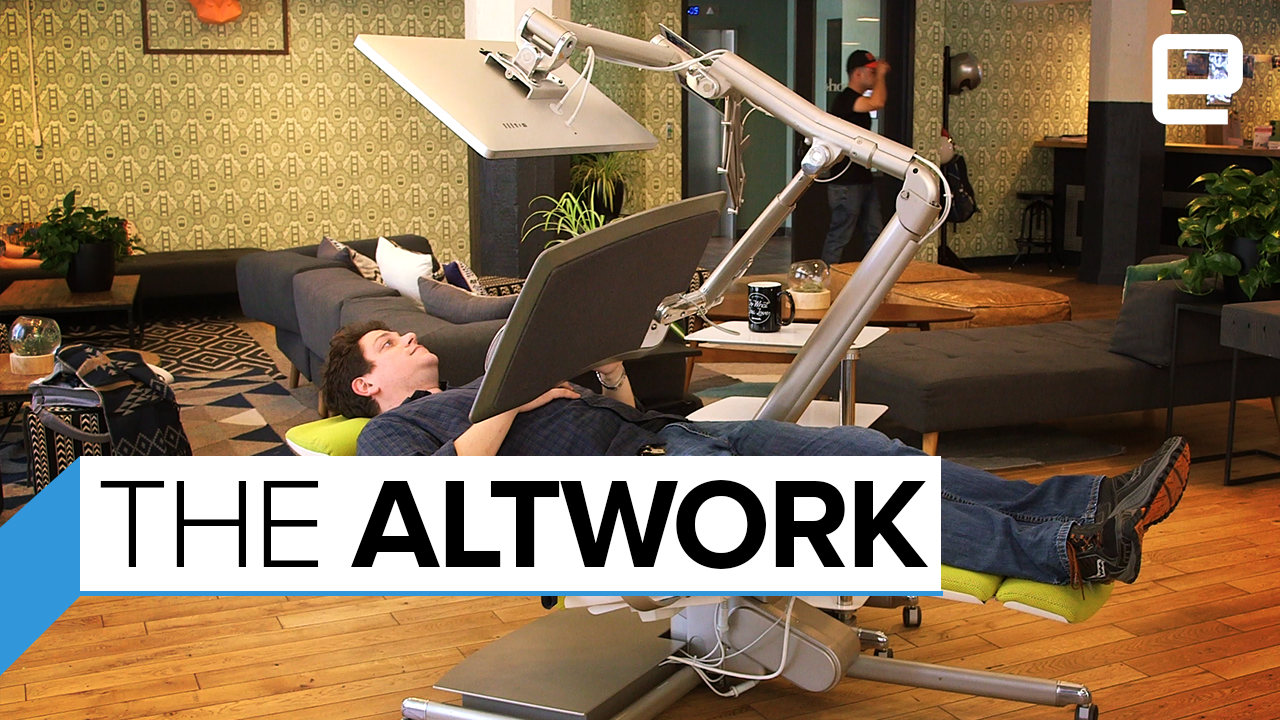 The focus position carries other pitfalls as well. Like, where am I supposed to put my coffee cup? Oh, it goes on the $650 side table that Altworks is hawking as an accessory item? Yeah, OK. What's more, you'll need to affix magnets (you know how they work) to the bottoms of your keyboard and mouse to prevent them from sliding off. And great googly moogly, does this thing take forever to fully recline -- 30-plus seconds by my count -- so if you want to work in focus mode, you'd better block out a couple of minutes to get situated and pray that you don't have to get up from there until you're done.

Then there's the price. You're going to need a second job to afford one of these things. The standard model, which comes in either of two frame colors (gray and a slightly darker gray), will retail for a whopping $5,900. That doesn't include the $650 side table, it doesn't include the $175 upper laptop mount and it sure as heck doesn't include a computer monitor; that's just the workstation itself. Now, if you want to get fancy with upholstery, seat-back and frame color options, you're going to want the "Signature" model. It's $6,900. Yeah, nearly seven grand for a device that transforms into both a standing desk and impromptu medical exam table. Sure, you get a $2,000 discount if you pre-order one before Saturday, July 30th, but that's still a sizable investment just to replace your current office furniture.

In this article: altwork, business, chair, design, desk, gear, personal computing, personalcomputing, station, table, workstation
All products recommended by Engadget are selected by our editorial team, independent of our parent company. Some of our stories include affiliate links. If you buy something through one of these links, we may earn an affiliate commission.