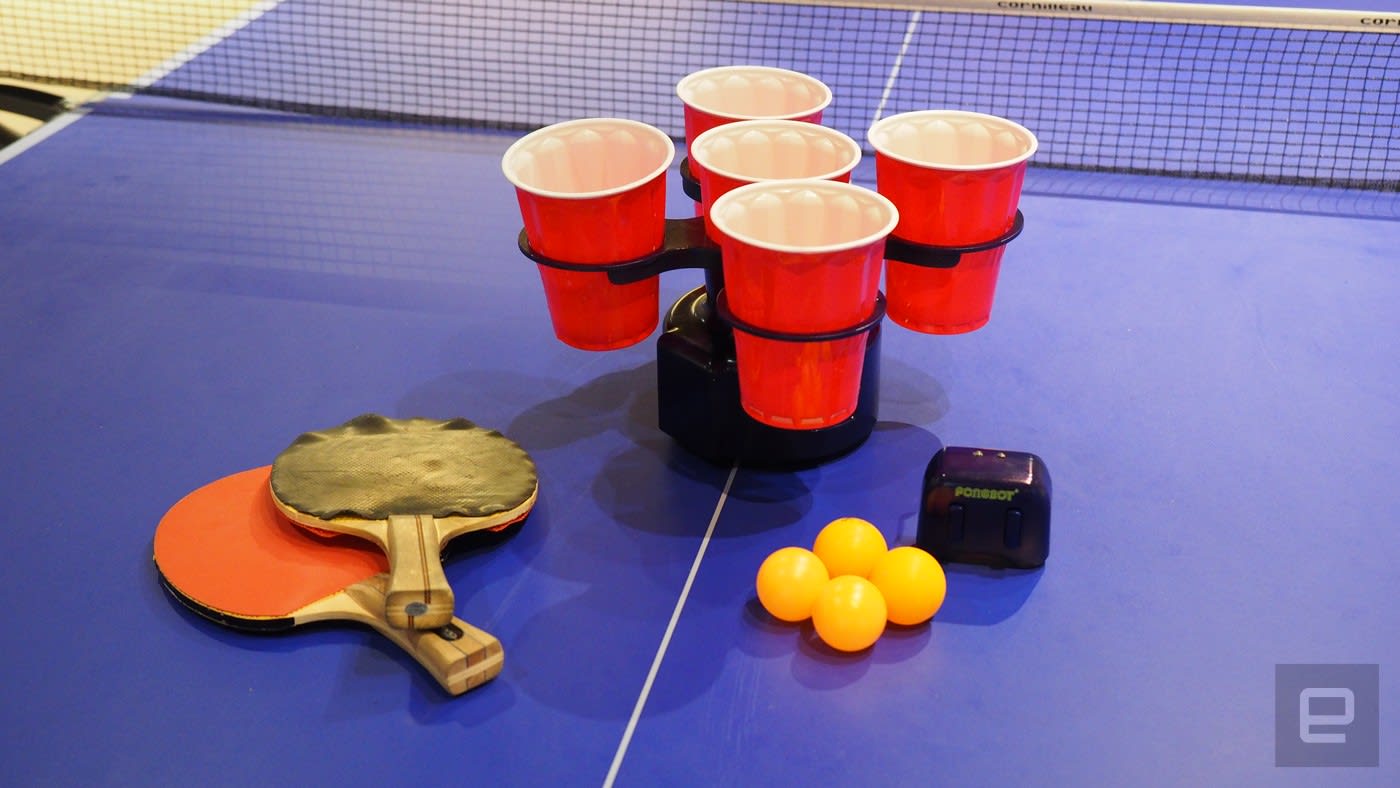 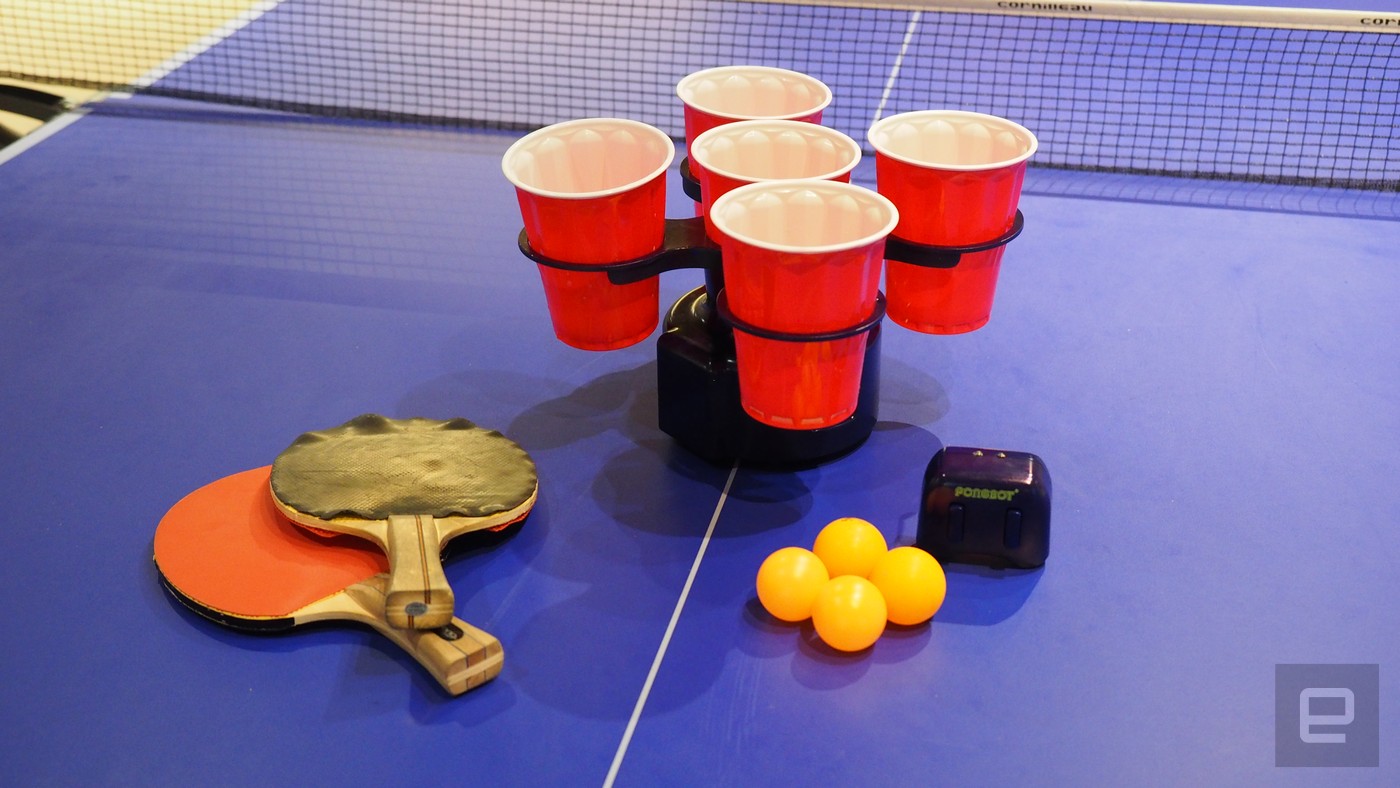 If you ever went to a party in college, chances are you've played beer pong. You throw a ball into a cup filled with beer, and a successful shot means your opponent has to take a drink. It's a way to make drinking a bit more social and competitive. It's also not something you do past a certain age -- maybe because of the frat house association, but also because it's not that hard. It's not supposed to be, given that the point is to get drunk. The Pongbot, a $40 device hitting Kickstarter today, shakes things up by making those beer-filled tumblers a moving target. You might not get drunk as fast, but you'll definitely feel the high of increased competition. The Pongbot isn't the first time someone's had the idea to put beer pong in motion. In fact, this year's it's been pretty trendy to stick a bunch of drink cups on top of a Roomba and make a game out of it. But creators Alan Dorfman and Jayson Esterow aren't just following a trend -- they've been working on the Pongbot for two years. Their solution is a lot simpler than a Roomba, too, not to mention a hell of a lot cheaper.

The Pongbot is a simple remote-controlled cart with a nook for the cup (you can add additional rings if you like). The bot can be set to wander on its own around a table, or it can be controlled via a remote. It doesn't have an app, but unless your phone is waterproof that's probably a good thing: Beer pong can get messy and you wouldn't want your expensive handset destroyed by crappy brew.

Another bit of drunk-proofing is the edge detection: Even if you deliberately try to steer the Pongbot off the edge of the table, it won't go. Or at least, that's how it's supposed to work. I managed to get it to tumble off a glass conference table, spilling beer all over a chair. It turns out that leaving one side of the Pongbot empty can throw the device off-balance, but hopefully in real-world use you'll be putting new beers in as quickly as you take them out. If there is an accident, though, the Pongbot is water-resistant and can be easily cleaned.

Out of the box, the Pongbot is fairly unremarkable, with very few features outside the cup holder and power switch. However, once you pop some cups into it becomes immediately obvious what's going on. The red Solo cup is iconic in its own right, and placing a bunch of them together automatically brings beer pong to mind. While testing the bot in a conference room at the Engadget office, a crowd of people came over to check it out, each citing their own fond memories of the game at their various alma maters.

I never played beer pong in college, because I am a boring person who never went to frat parties. But I do enjoy games, and I like to be challenged. And playing beer pong with the Pongbot was a bit of a challenge. It reminded me of a carnival game, though instead of winning a crappy stuffed animal I get to be drunk instead. If I wasn't so terrible at it, that is. The Pongbot doesn't follow a set pattern, so it's really about just watching where it's going and adjusting your aim toward that. If you were bad at throwing pingpong balls before, this definitely isn't going to help. I tossed a few balls at the cart, watching them bounce off the edges of the cups while the Pongbot mocked me with its constant little wiggles across the table.

What's nice is that it opens up the game of beer pong to more rules variations. One obvious mode is to have your opponents control the Pongbot during your turns, but ultimately there's no "correct" way to play with it as it doesn't come with any directions and that's by design.

If beer pong is yet another task you're willing to cede to our robot overlords, you can snag a Pongbot on Kickstarter starting today for the tidy sum of $40.

In this article: beer, beerpong, culture, gear, Kickstarter, pingpong, pong, Pongbot, robots, TL16PPONG, TL17CZGFT
All products recommended by Engadget are selected by our editorial team, independent of our parent company. Some of our stories include affiliate links. If you buy something through one of these links, we may earn an affiliate commission.