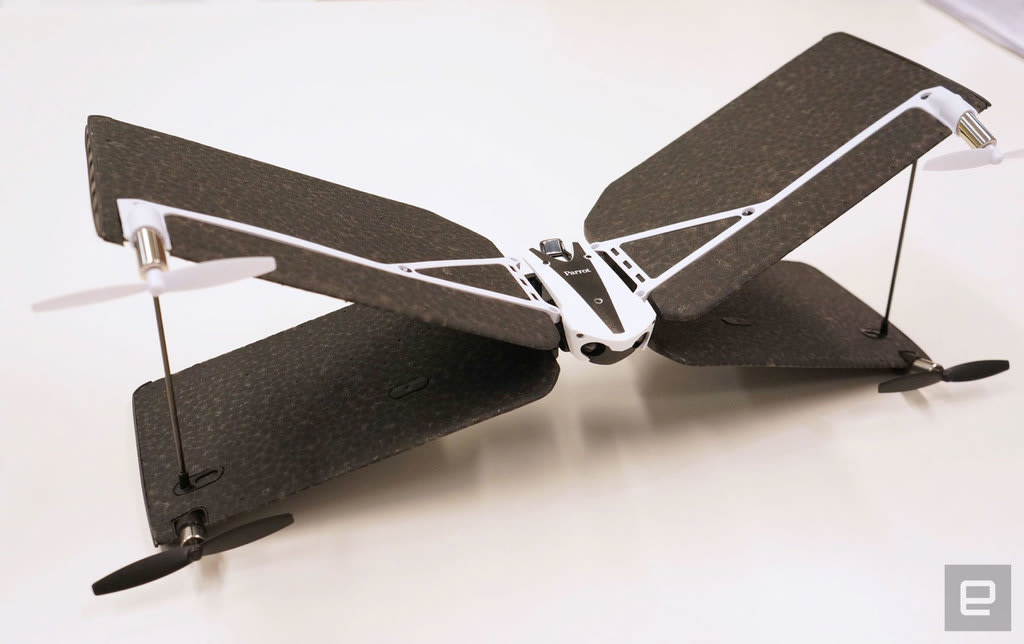 Remember when drones used to be fun toys, not a serious business regulated by the Feds? Parrot does, judging by its two latest models, the Mambo and Swing. The $139 Swing looks a lot like an X-Wing fighter, but the wings aren't just for show. After a regular vertical takeoff, you can make like a V22 Osprey and transition to horizontal flight, hitting speeds of up to 18 mph. It then does high-speed aerobatics including turns, U-turns, half-flips and loops, "all with amazing fluidity and stability," Parrot says. Though it's built for free-flying thrills, it's also equipped with a 3-axis accelerometer and gyroscope that keep it at a steady altitude in plane mode. Meanwhile, an on-board 480 x 640 camera gauges the drone's forward speed and can save photos to a 1GB flash memory chip (no live view, though). When you're ready to land, an ultrasound sensor detects the ground from less than 13 feet away, helping it set down gently. And it does all this while looking like it can blast a Tie fighter out of the sky.

Speaking of blasting, what if you married a tiny Nerf gun and a drone? That's the premise behind Parrot's other new drone, the $119 Mambo. It's a very small, 2.2 ounce UAV that comes with two accessories: the Cannon and Grabber. The Cannon carries six "pellets" that you can fire up to six feet, while the Grabber lets you pick up and drop very small objects (up to 4 ounces) like a sugar cube. For $15 extra, you can also get the "Illuminator" LED accessory, with controllable intensity and flashing.

The Mambo can also do aerobatics at up to 18 mph, and has a built-in 3-axis gyro and accelerometer. Like the Swing, there's a vertical camera that measures speed and snaps photos, and it packs an identical autopilot and landing features.

Both devices can fly for 8 minutes and come with a new app, the FreeFlight Mini. It lets you set up custom commands and parameters for the drones, and fly them at up to 65 feet away using Bluetooth LE. However, you'll probably want the new $39 FlyPad joystick controller, which should make piloting a lot easier. It extends the range of both drones to 196 feet and comes with a smartphone holder. Both drones and the Flypad arrive in September.

In this article: Cannon, Drones, gear, Grabber, Mambo, Parrot, robots, Shooting, Swing, UAV, video
All products recommended by Engadget are selected by our editorial team, independent of our parent company. Some of our stories include affiliate links. If you buy something through one of these links, we may earn an affiliate commission.