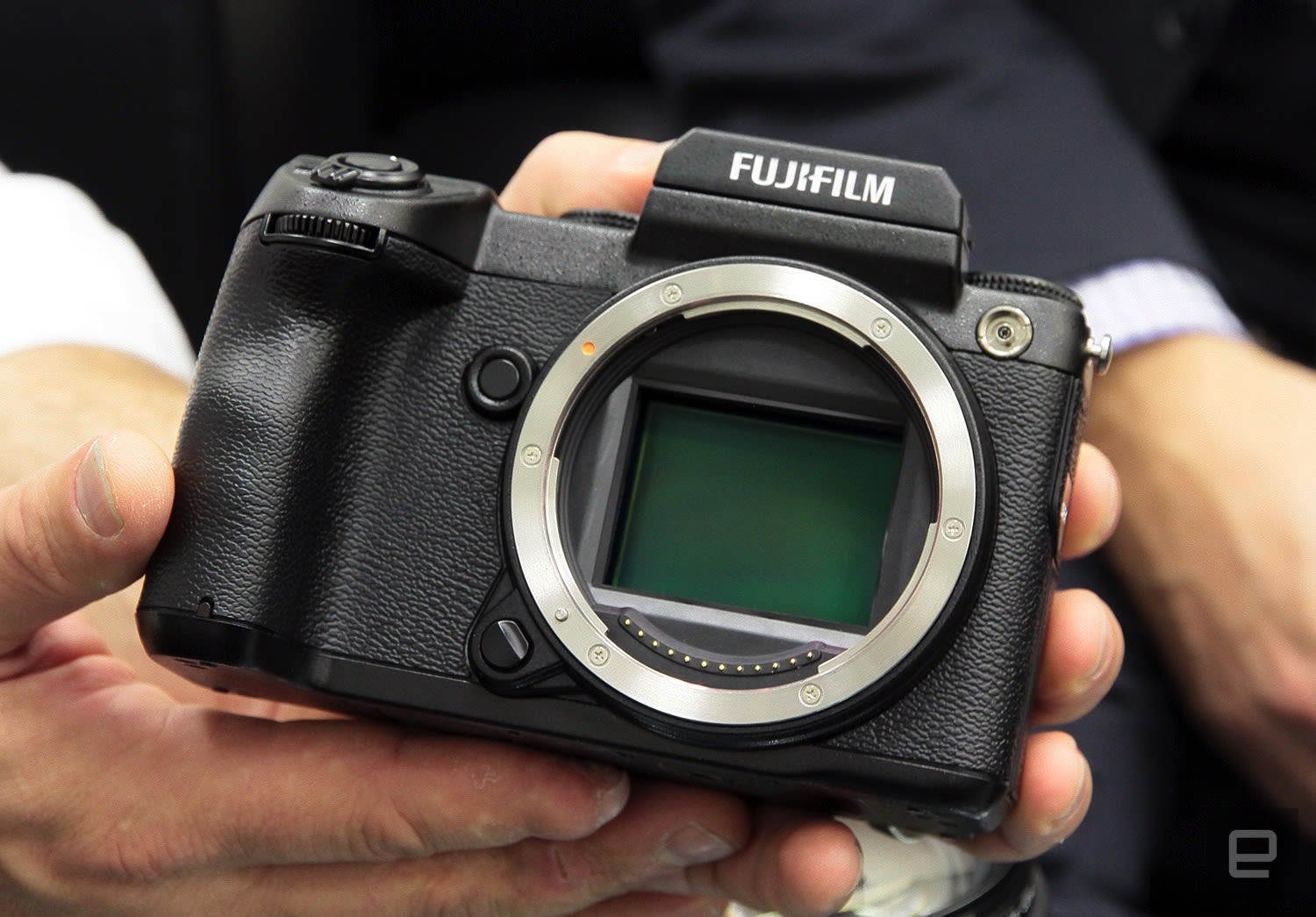 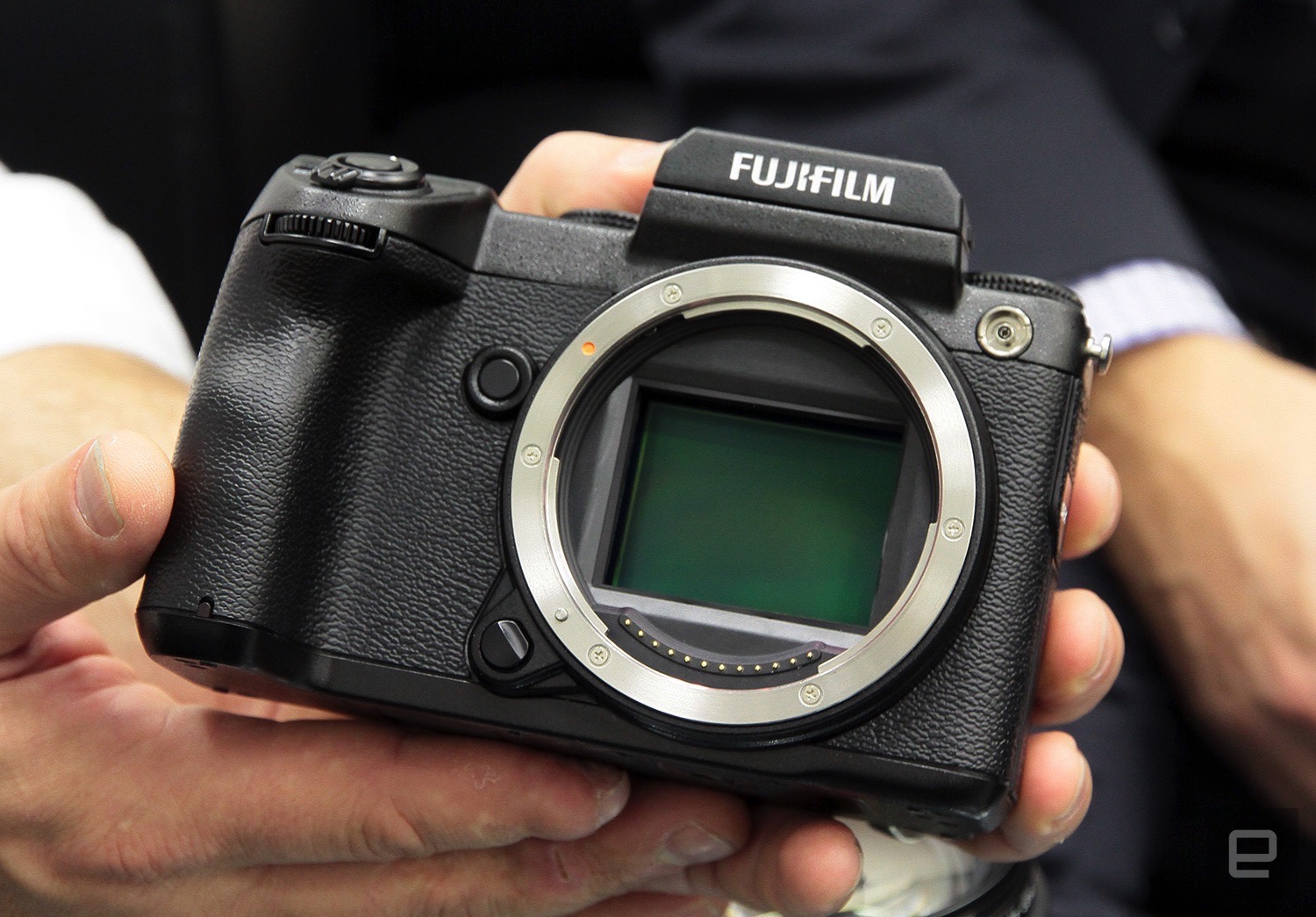 Fujifilm made the biggest splash at Photokina with the GFX 50S, a mirrorless camera with a giant sensor stuffed into a fairly compact body. When it arrives early in 2017, the company will be in the weird position of having APS-C and medium-format cameras, but no full-frame model. So, it's a big risk: Fujifilm is introducing a new format, complete with brand new lenses, and hoping that the market is open to the idea. Most importantly, how is it as a camera? Fujifilm hasn't released any images yet and the prototype had no memory card, but we were able to play with it a bit at Photokina. My first takeaway was just how small it is given the huge sensor.

You'd be forgiven for mistaking it for a DSLR or an oversized X-T2. I held it in one hand (I think I saw the rep flinch) with my camera in the other and believe, unofficially, that the GFX 50S is lighter with Fujifilm's new 63mm f/2.8 prime than a Canon 7D with a similar-sized 15-85mm zoom. It's less chunky as well, and thanks to the just-right grip, is marvelous to hold.

The weather-sealed camera is heftier than Hasselblad's new X1D medium-format mirrorless camera. But Fujifilm told Engadget that it wasn't aiming for the lightest weight, but just something lightweight with the best optical performance.To that end, it used a focal-plane, rather than the typical leaf, shutter. That helps keep the flange-back lens distance as short as possible -- just 26.7mm. That, it says, makes for the best optics and most compact lenses. 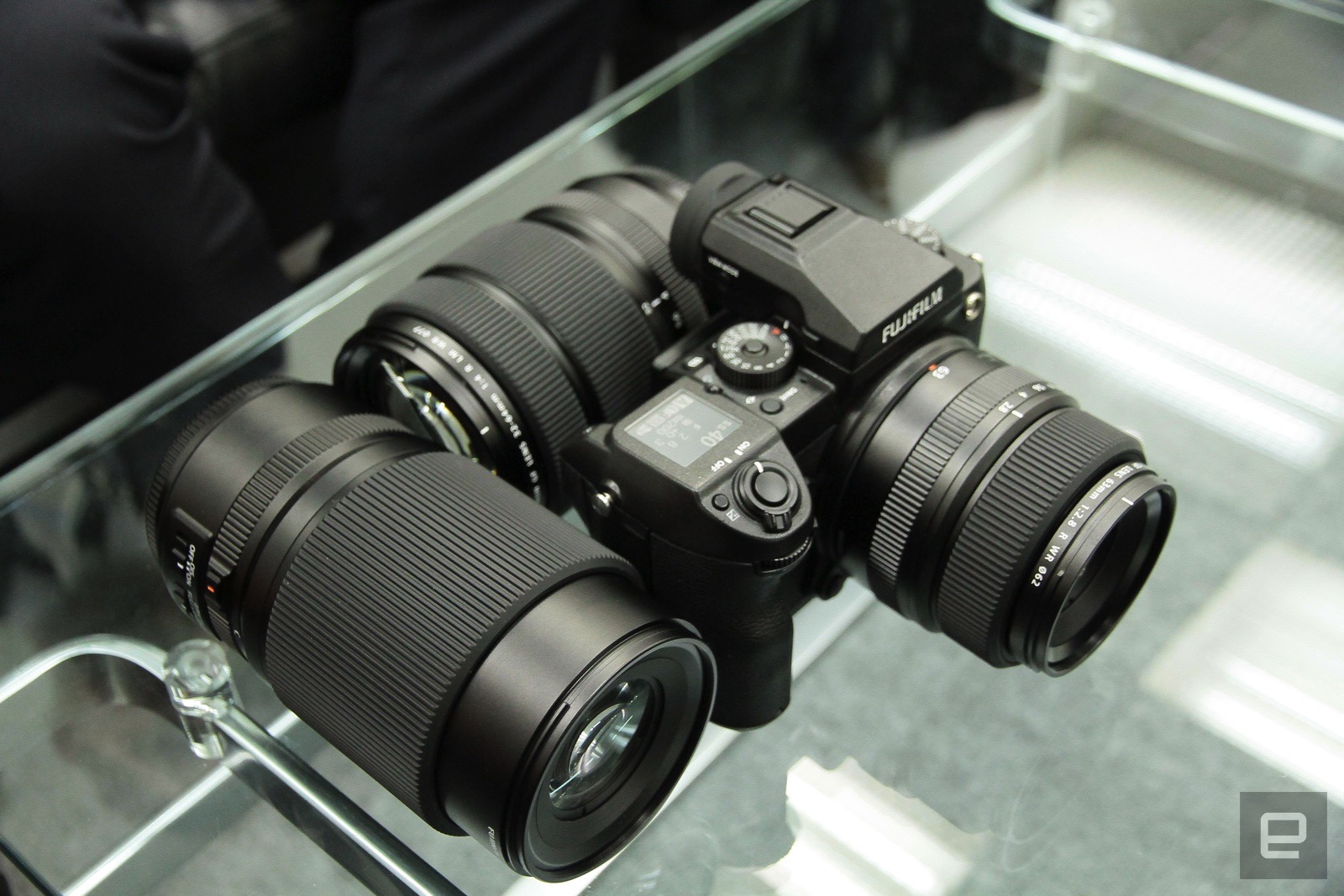 The viewfinder is removable, and you can install a tiltable one or a large monitor in its place on the dedicated hotshoe. You can even go without an EVF completely, if that suits you. Given the large sensor and small body, battery life might be a concern, but Fujifilm will offer a grip accessory that adds longevity and additional camera controls.

As for the menu system, Fujifilm isn't reinventing the wheel. It's wisely sticking to the setup it uses for its high-end X-series APS-C mirrorless models, with simple menus and dedicated physical dials for ISO, shutter speed and aperture.

It's only when the lens is popped to show the 43.8mm x 32.9mm, 51.4-megapixel sensor that you realize you're in new territory. The size is quite a leap (1.7 times more area, to be exact) from the 36mm x 24mm chips on full-frame cameras by Sony, Canon and Nikon. Fujifilm engineered and built the new bayer (not X-trans) chip, which has no AA filter. 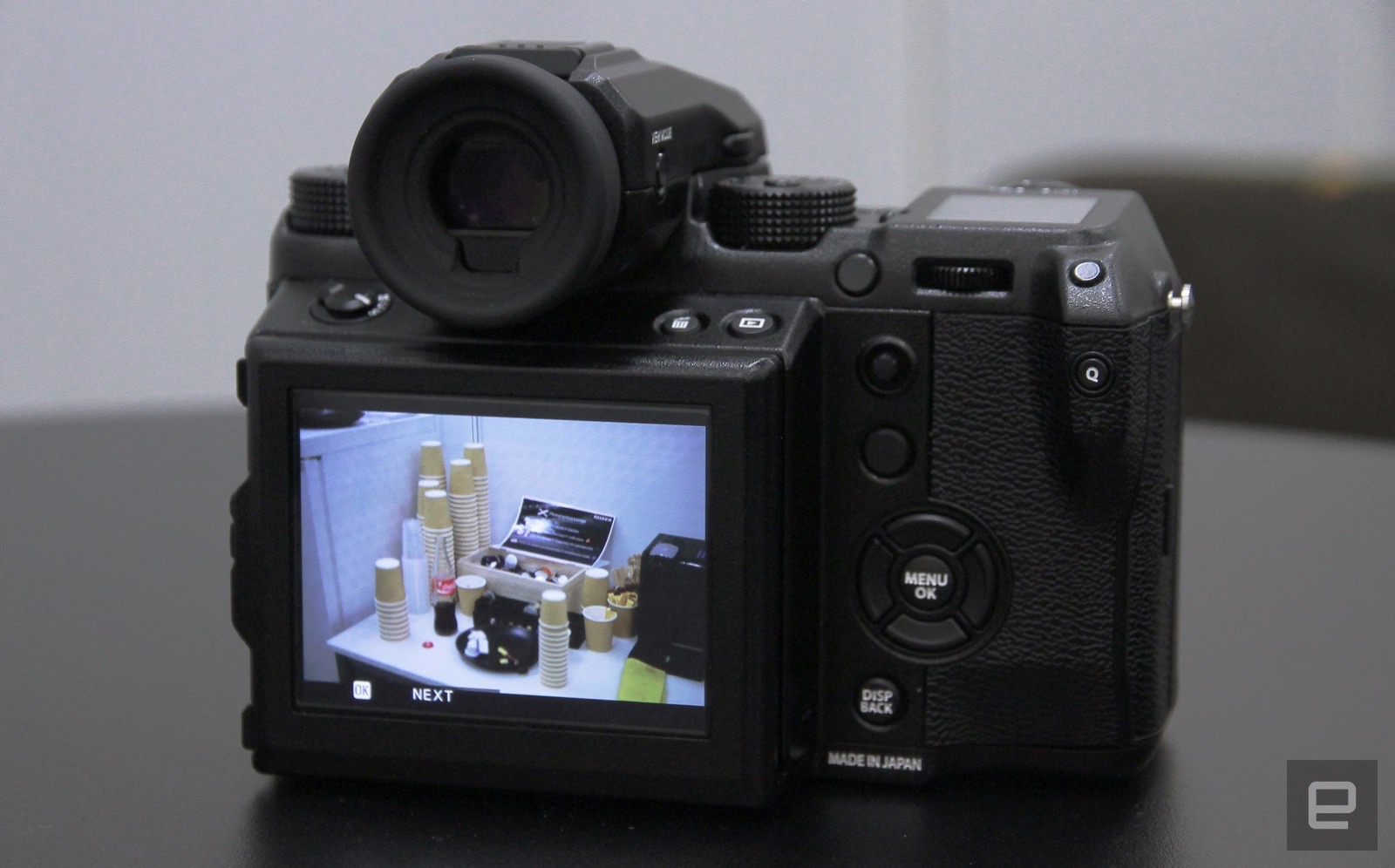 The EVF is remarkably bright and sharp, and the rear, tiltable display appears to be very high resolution. Looking at either, you can see the fruit of a larger chip. With the 63mm lens set at f/2.8, the depth of field is razor-thin, so this thing is going to require a very good autofocus. Taking a few (simulated) shots, the AF was not fast, but again, it's a prototype and there's plenty of engineering work left to do. In any event, it's not a camera for sports photographers or photojournalists -- the large sensor is better suited for portrait, landscape and architectural photography.

It will take seriously good lenses to resolve a medium format, 50-plus megapixel sensor. Fujifilm said its three new models, a 63mm f/2.8, 120mm f/4.0 macro and 32-64mm f/4.0 zoom have much more sharpness than needed. (During its press event, in fact, Fujifilm said it wants the lenses to be ready for 100-megapixel sensors in this format). It'll release an additional three lenses, a 35mm f/2.8, 23mm f/4 and 110mm f/2 in mid-2017 (remember that on a medium-format camera, the crop factor is less than one).

The success on this model will likely depend on the price, but Fujifilm said it will be well south of $10,000 (the Hasselblad X1D is $9,000 for the body only). At the same time, Fujifilm suggested that it's not in competition with, and will therefore not be as cheap as, a $3,500 Canon 5D Mark IV, for example. In any case, the medium-format market is now getting oddly crowded with models from Hasselblad, PhaseOne, Pentax and now Fujifilm. And that should make the once-neglected segment, and photography in general, much more interesting.

In this article: cameras, firstlook, Fujifilm, gear, GFX50S, hands-on, MediumFormat, Mirrorless, Photokina, Photokina2016, Prototype
All products recommended by Engadget are selected by our editorial team, independent of our parent company. Some of our stories include affiliate links. If you buy something through one of these links, we may earn an affiliate commission.