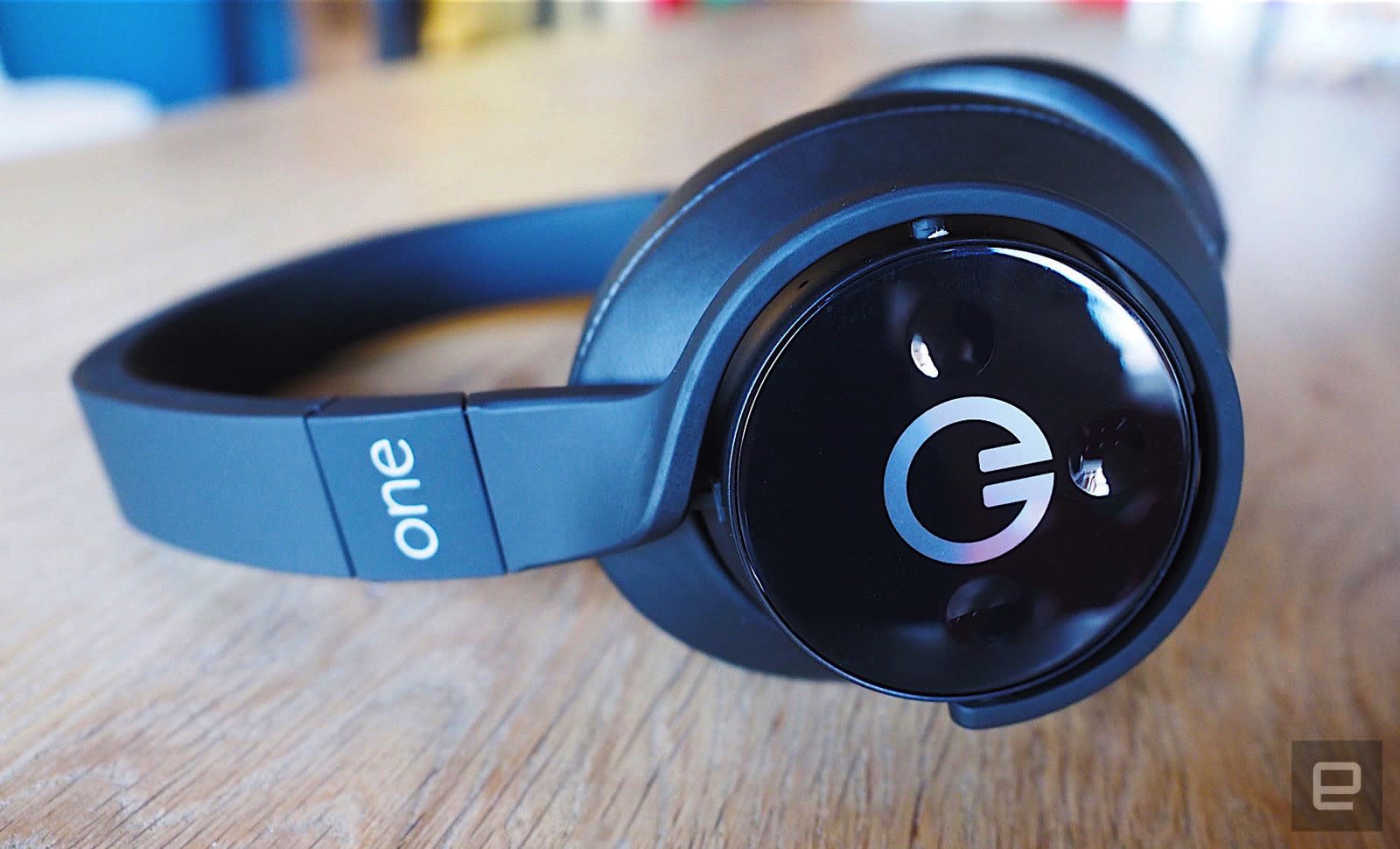 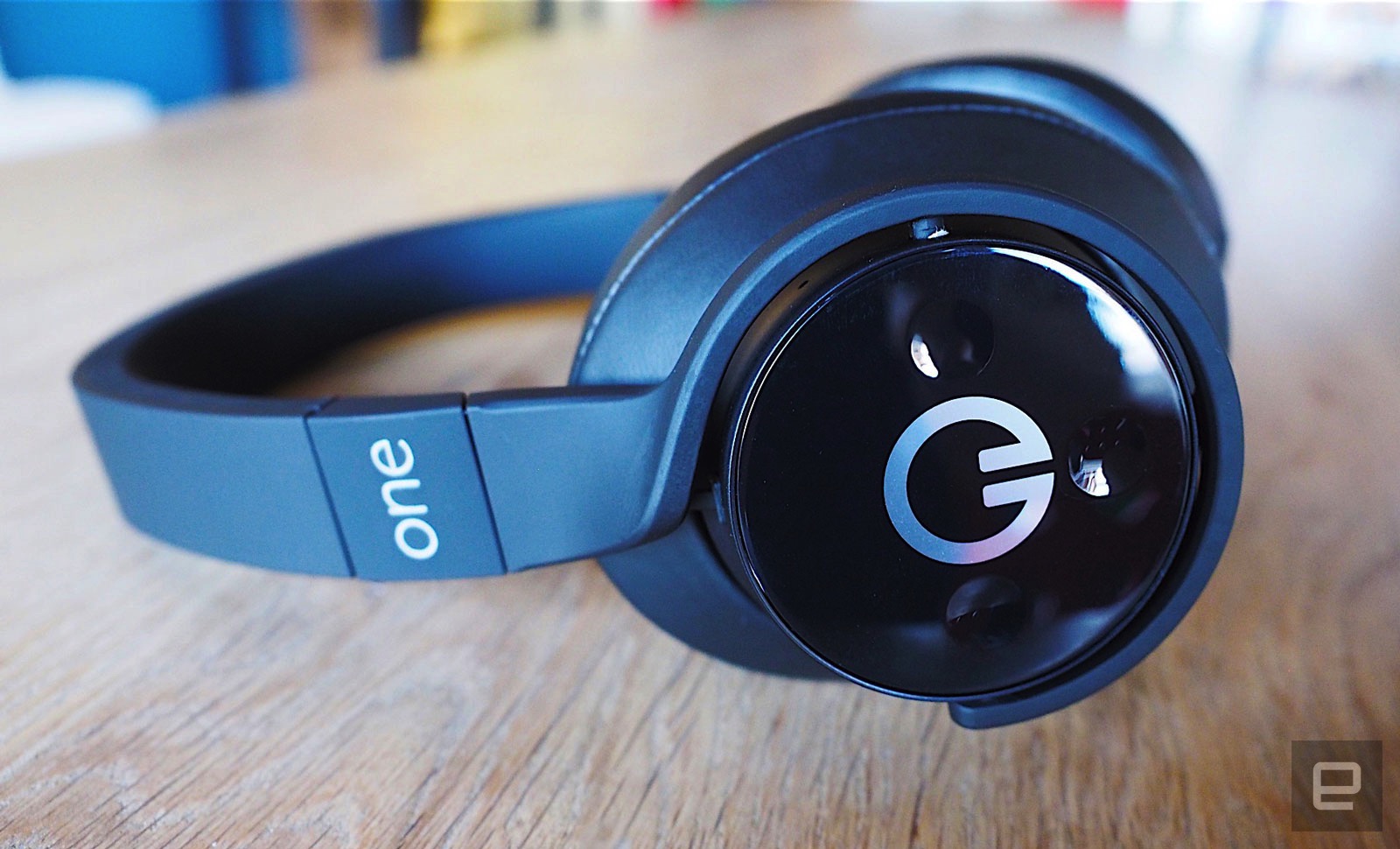 Muzik CEO Jason Hardi started his headphone company back in 2013 to, as he puts it, "connect the world." But even though he's been showing off versions of the hardware throughout the years -- and even received a small investment from Twitter earlier this year -- it's never actually made it to market. Until a couple of months ago. That's when Hardi and co. finally unveiled the Muzik One, which launched alongside a partnership with Spotify. What's the big deal? Well, the One is a pair of "connected" headphones that lets you share whatever you're listening to on the social media platform of your choice with just a tap of a button. Sharing music has never been so easy. Whether or not that's worth $300, however, is less clear.

Regardless of its song-sharing features, these headphones look and feel like a really nice set of cans. It's constructed out of aircraft aluminum and a soft supple leather covers both the handle as well as the ear cup cushions. Plus, the headphones fold inward for better portability. I've carried them around in my backpack and even my smaller shoulder bag without any problems.

What's more, those ear cushions are interchangeable; they attach and detach magnetically, so you can swap the default over-ear options with smaller on-ear versions. Both feel comfortable when nestled next to my ears though I tend to prefer the over-ear cushions as they result in less outside noise. Speaking of that, the Muzik One headphones boasts "passive noise-isolation," which really just means there's enough padding to block out environmental sound. It doesn't have the active noise cancelation like a Bose would have, for example. That said, I still thought it did a great job muffling the din of the outside world. 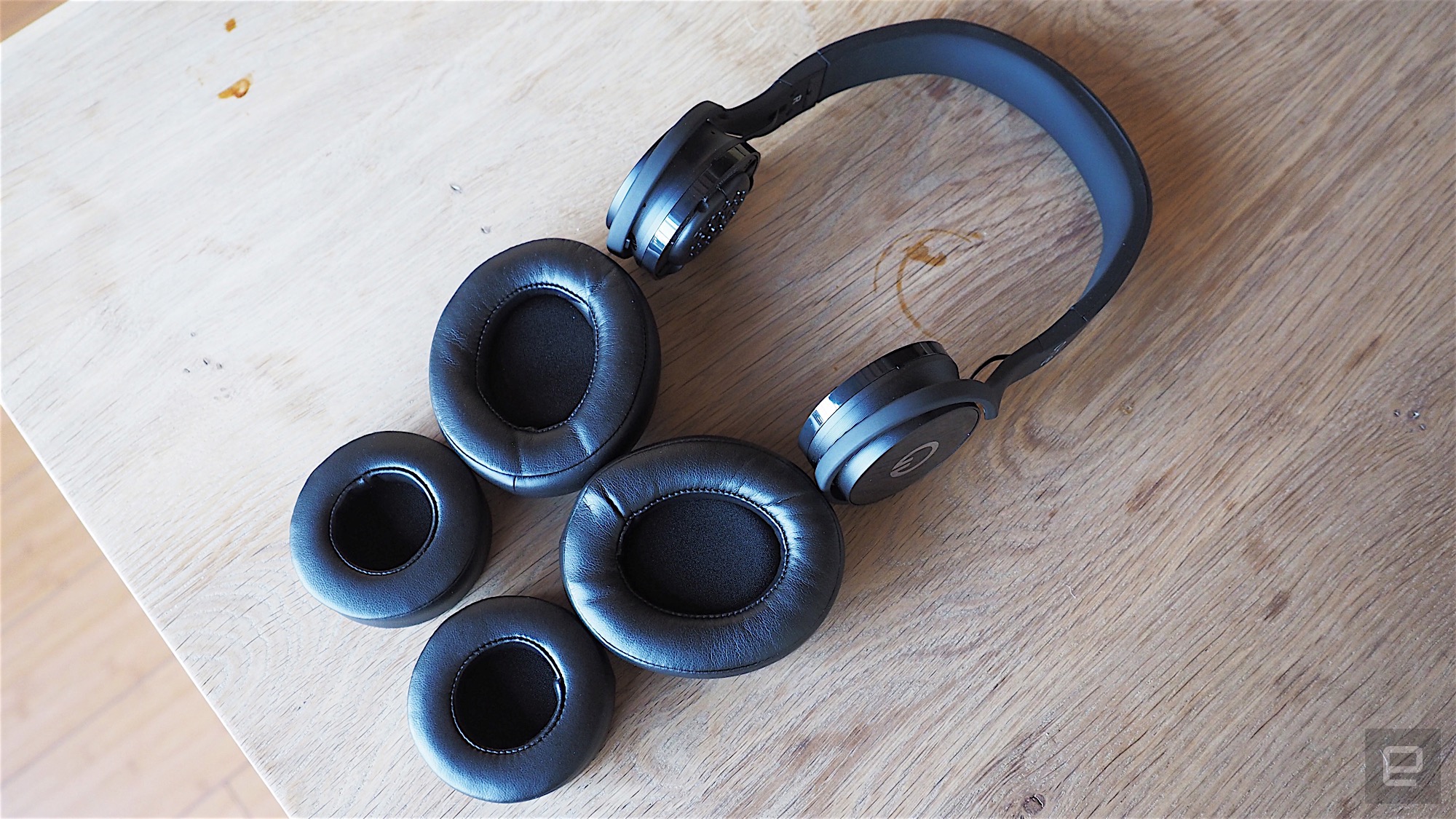 Speaking of which, I thought the audio quality was really quite good. Muzik boasts custom-tuned 40mm drivers and an enhanced digital sound processing that results in rich and smooth sound. Drums punched through convincingly and bass had a nice strong presence without being too aggressive. Middle and high notes sounded crisp and sharp, and both really show off the vocal range of the artist. In general, the Muzik One sounds just as good as most other premium headphones I've tried.

All of the One's controls are housed in the right ear cup, along with a micro-USB charging port and a 3.5mm headset jack if you want to use it with a wired connection. The power button is on the side, but the entire surface acts as a large touch sensor. You can turn on swipe gestures, which let you swipe up and down to adjust volume, or left and right to change tracks. Tapping the overall surface of the cup will either play and pause a song or answer a phone call.

There are also four touch-sensitive buttons on the surface. Each of these buttons can be mapped via a companion app to a variety of different functions. They include the usual music controls, but you can also set it so that it'll tell you the weather forecast, battery levels, what time it is or what song is currently playing. There are even Spotify-specific actions like the ability to follow the artist that's currently playing, play a specific playlist, save the song to "Your Music" library or to add a song to a playlist. You can also enable voice commands, have it tell you a five-minute NPR hourly news summary and connect to an IFTTT recipe or, say, turn on your Nest thermostat. 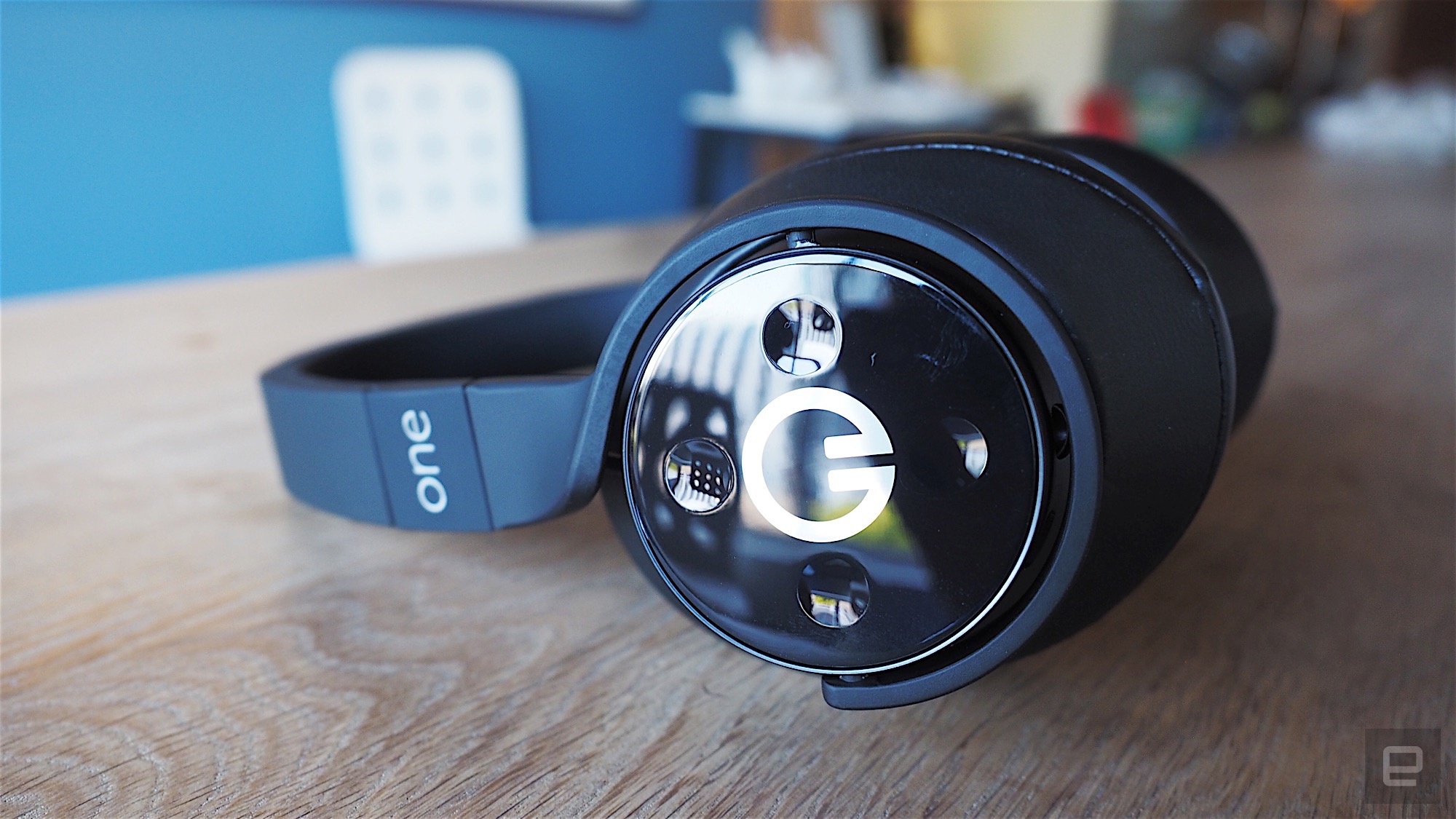 A particularly noteworthy feature -- and one that makes the Muzik One unique -- is that you can also map those buttons to share what you're listening to on either Facebook or Twitter. Sharing it on Facebook will result in a post that attaches a short 30-second preview of the song, a link to add it to your Spotify list, along with the hashtags #NowPlaying and #ConnectSmarter and the song's name. There will also be a link to Muzik's Facebook page. If you don't want those extra hashtags and links, you can edit the post and remove them, but there's no way to prevent them from posting.

Similarly, sending it out over Twitter will append a Spotify link to the song plus the song's name and album cover, along with the #NowPlaying and #ConnectSmarter hashtags and a mention of @MuzikConnect. If you want to remove those hashtags, you can't; there's no template for tweets in the Muzik app. And since you can't edit tweets, the only way to remove them is to delete the entire post.

Another way to share what you're listening to on Twitter is via a "Moment," which essentially attaches a Google Maps StreetView shot of your location along with the current weather and date / time. Muzik says this is a good way to remember where you were when you were listening to that special song, but I found it a touch creepy to be sharing that with the world.

And that's really my only issue with the Muzik One. I just had no real desire to share what I was listening to, and even when I did, I couldn't control the format enough for my liking (I wouldn't have included all those hashtags, for example and would have prefered to add in my own commentary). I do enjoy the other features, like voice commands and the weather forecast, and those Spotify-specific functions are great, especially because I'm a big Spotify fan. But I could do without the sharing.

Another aspect that I like about the One is that it has a relatively long rated battery life of around 30 hours. I've managed to use it for hours on end without it dying, so that rings true to me. I should note here that you can still use the headphones as an ordinary pair of cans with a wired 3.5mm connection -- the only features you miss out on are the touch-sensitive controls. And since it's connected to your phone anyway, I didn't miss them much. 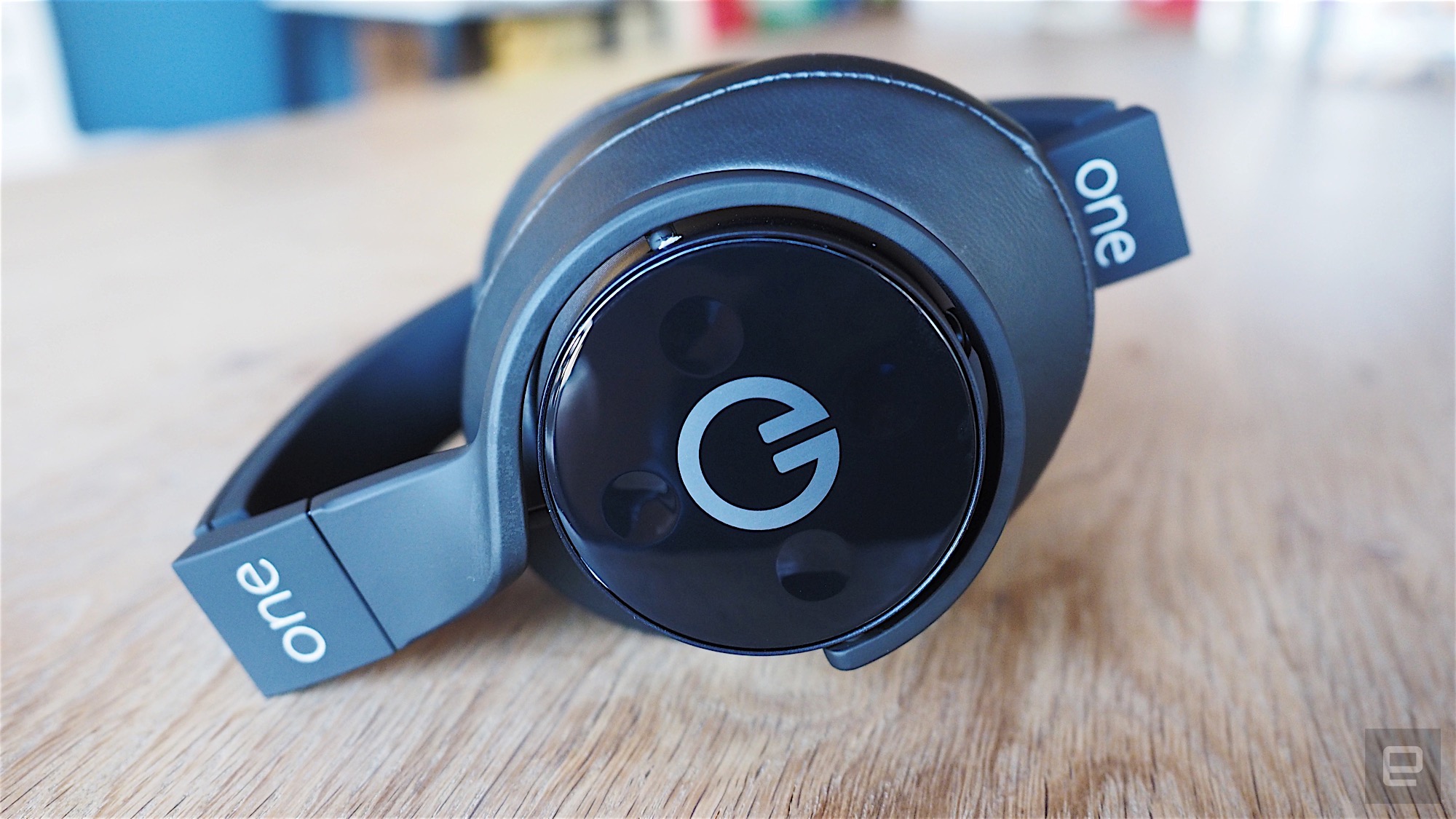 On the whole, I found the Muzik One to be a very good pair of headphones. It's comfortable and well-constructed, and I love the audio quality. It works well in both wireless and wired modes, and the fact that you can map those touch-sensitive buttons to extra functions like the weather forecast and Spotify playlists are great.

I wasn't too enthused by its song-sharing features, however, which are what set the One apart from the rest of the $300 headphone pack in the first place. And because of that, I can't say that I recommend the Muzik One. Similarly priced headphones like the Sennheiser Momentum 2.0 and the B&O Play H8 have characteristics like active noise-canceling and luxe finishes, both of which I would prefer over social media sharing. What's more, there are also more affordable Bluetooth headphones like the Jabra Move or the JBL E40BT that might not be so premium, but are still highly rated for audio quality. They won't have the same social and Spotify-friendly features, but at those prices, I can live without them.

In this article: av, engadgetirl, gadgetry, gadgets, gear, Muzik, muzikone, review, socialheadphones
All products recommended by Engadget are selected by our editorial team, independent of our parent company. Some of our stories include affiliate links. If you buy something through one of these links, we may earn an affiliate commission.