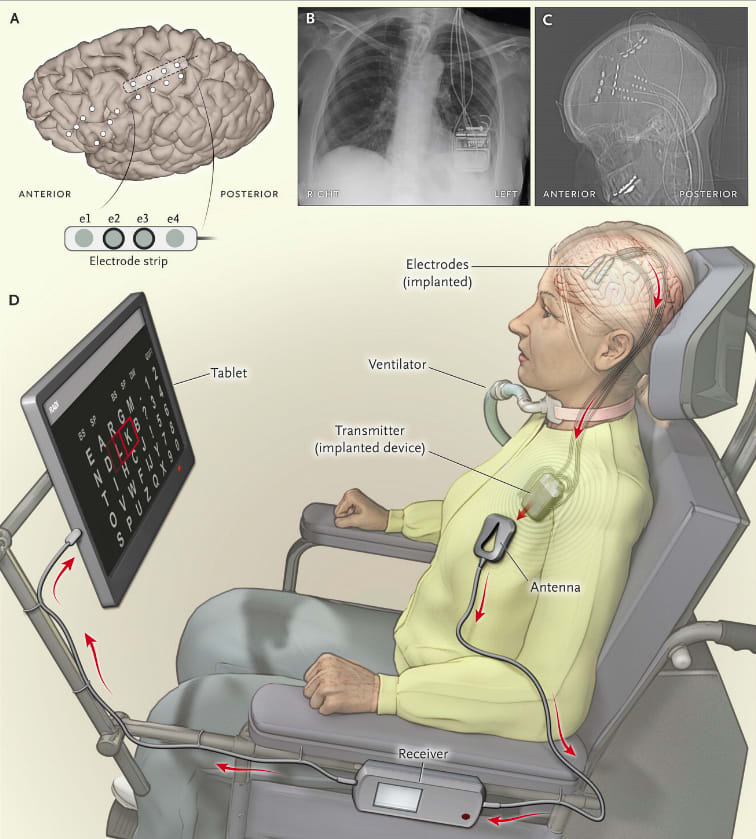 A 58-year-old woman left paralyzed by amyotrophic lateral sclerosis (ALS, also known as Lou Gehrig's disease) has now become the first patient to use a brain-computer interface to restore some of her day-to-day functions. The woman was left "almost completely locked-in" after the disease caused her motor neurons to deteriorate to the point where she could only control her eye muscles. While brain implants have been in development for years, this particular patient has become the first to make use of one at home and outside of a research or hospital setting.

The patient, whose treatment is detailed in a new paper in the New England Journal of Medicine, had a device called an electrocorticograph (ECoG) installed directly on her brain. In this case, the ECoG's electrodes pick up impulses normally associated with moving her right hand and then amplify and transmit those signals using a small device implanted in her chest. A wireless receiver outside her body then converts the signals into data that can be used to control a table computer in front of her. In order to get the whole system working, the patient had to train her brain by playing Pong and whack-a-mole on the tablet, until she eventually could perform a "brain click" just by thinking about moving her right hand.

While the system is still slow -- Ars Technica reports it takes her about 20 seconds to click a letter from an on-screen keyboard -- the system is constantly being improved to add more useful functions like adjusting her thermostat or turning on the TV. And, for now, the amount of independence this patient now has is a major breakthrough in itself. "I'm more confident and independent now outside," the woman told New Scientist in an interview. "My dream is to be able to drive my wheelchair."

Via: Ars Technica
Source: New England Journal of Medicine, New Scientist
In this article: als, brainimplant, cyborg, ecog, eeg, LouGehrigsDisease, medicine, paralysis, science
All products recommended by Engadget are selected by our editorial team, independent of our parent company. Some of our stories include affiliate links. If you buy something through one of these links, we may earn an affiliate commission.