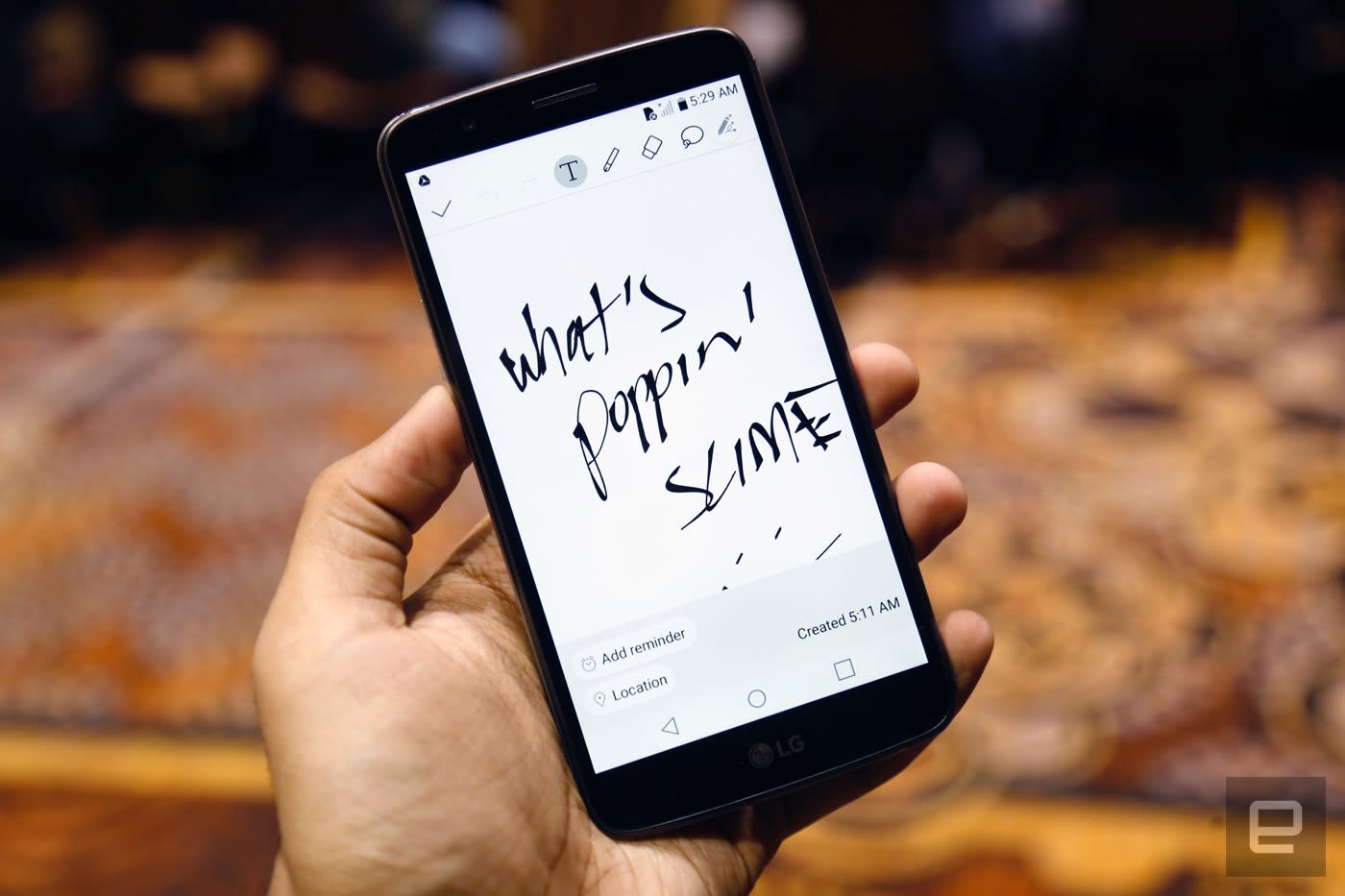 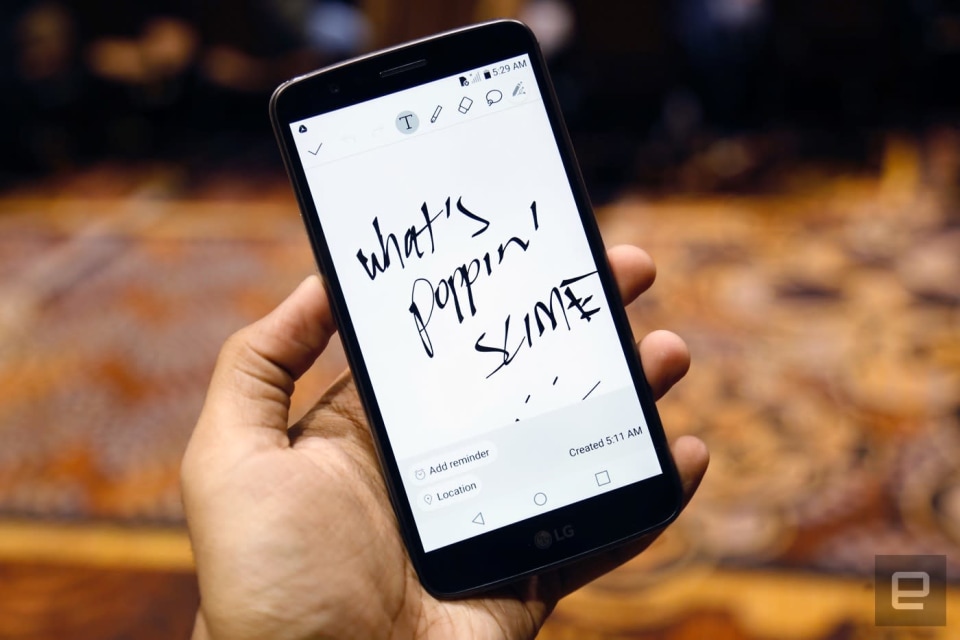 Now that the Galaxy Note 7 is just a footnote in smartphone history, what's a person supposed to do if she wants a phablet with a stylus? Well, there's always the LG Stylo 3. It was the most interesting of the midrange mobiles LG announced before CES officially started, and it's a testament to how good non-flagship phones can be. Mostly.

The MediaTek name doesn't mean a whole lot in the US right now, but LG chose one of the chipmaker's octa-core processors to run the Stylo 3, along with 3GB of RAM. Throw in a mostly clean build of Android 7.0 Nougat and LG's lighter-than-ever UX 5.0+ and you've got the makings of a pretty snappy little machine. I should point that the interface here is identical to the one seen on the LG V20, and at first blush there didn't seem to be a huge gap in performance either. Swiping around, launching apps, scrolling up and down through Engadget's home page -- all of that felt smooth, more or less. Then again, these devices didn't have carrier bloatware or anything, so the conditions are pretty ideal; I'm looking forward to seeing how the Stylo stands up in the real world. 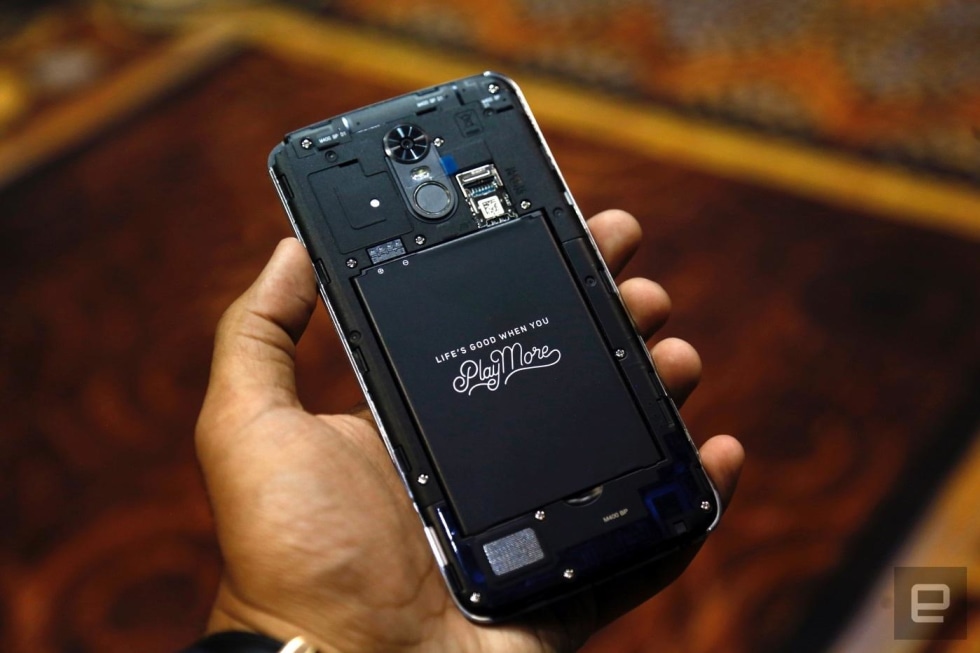 I wish the 13-megapixel camera on the Stylo's back were better, though. The light in LG's rented ballroom was mediocre at best, and the Stylo struggled to capture detail or correct colors in just about every shot. It should do better under brighter conditions, but that's true of any smartphone camera. A sensor's true character is only apparent when the going gets dark, and the Stylo falls short. The 8-megapixel selfie camera was mildly better, if only because it proved to be most decent at capturing wide-angle selfies. Images the Stylo didn't capture, however, looked sufficiently bright and clear on the phone's 5.7-inch, 1080p IPS LCD screen.

And then there's the stylus. It's been a while since I've used one of LG's Stylos, but it'll feel remarkably familiar if you're used to Samsung's Note line. A tiny software window pops up when you pull out the stylus, proffering quick access to memo, doodling and screen-capture apps -- like on a Note. That's if you manage to get the stylus out without swearing in annoyance, by the way. A few LG spokespeople asked me if I could find where the stylus was stored, and I admit it took a few moments; that's how well the edge of the stylus blends into the Stylo's silver plastic frame. If you're the type who keeps your nails on the longer side, you'll be fine. Meanwhile, I had a lot of trouble digging the stylus out, to the point where I probably flubbed our video a few times. Once you get it out, though, writing on the screen is quite pleasant. The thinner stylus is tougher to hold onto than an S Pen, but LG did a surprisingly good job on the pen's nib -- it does sort of feel like writing on paper. Still, its thin build feels borderline flimsy, and I wonder if I could ever reliably get that stylus out when I need it.

We obviously can't pass final judgment on the Stylo 3 yet, but so far it seems like a solid option for people who like the idea of writing on their smartphones. The seemingly small gap in performance between the Stylo and something like the V20 is heartening too, though you shouldn't fool yourself. As pleasant as the phone is, it falls far short of flagship quality. On the flip side, you most likely won't have to pay a flagship price: LG hasn't confirmed pricing yet, but we wouldn't expect it to break the bank.

Click here to catch up on the latest news from CES 2017.
In this article: android, ces2017, gear, hands-on, lg, mobile, nougat, smartphone, stylo, stylo3, stylus
All products recommended by Engadget are selected by our editorial team, independent of our parent company. Some of our stories include affiliate links. If you buy something through one of these links, we may earn an affiliate commission.