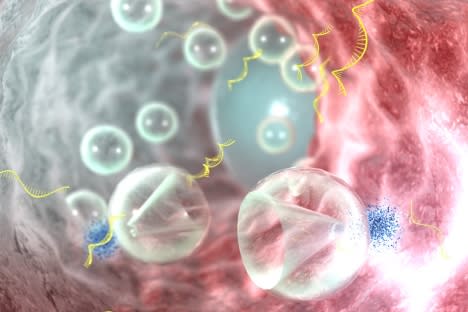 Scientists at MIT and Brigham and Women's Hospital have been able to push strands of RNA (ribonucleic acid) into colon cells using bursts of ultrasound waves. The treatment, thanks to how RNA can reprogram the production of proteins, dramatically reduced levels of a protein that's found only in colon cells during inflammatory bowel diseases. It caused inflammation inside mice test subjects to almost disappear -- and without any side effects.

Carl Schoellhammer, the study's lead author, said that the team "saw tremendous knockdown of those proteins." Parts of RNA, short-interfering RNA, can turn off specific genes. Typically, these treatments don't work inside the gut as RNA gets broken up into molecules on its way to the affected area. Using ultrasound as a delivery method means this doesn't happen, as it gets inside cells so quickly.

At low frequencies, ultrasound waves make tiny bubbles in a solution which later burst, pushing drugs and/or RNA into cells. During the group's tests on mice, those that received RNA through ultrasound saw a sevenfold to tenfold reduction in inflammatory protein levels, with inflammation nearly disappearing. The researchers noted no adverse side-effects, while RNA delivered without an ultrasound-powered nudge had no effect on the mice. This technique could be used to treat both other gastrointestinal disorders as well as diseases in other parts of the body. RNA treatment could be used to reprogram protein production in cancerous cells, for example.

The researchers have formed a company called Suono Bio to develop the tech, and are planning to develop a treatment method for inflammatory bowel disease in humans-- if it passes the requisite clinical trials. The team is also working on miniaturized devices that would carry drugs or RNA, as well as emit its own ultrasound waves, for delivery to the stomach or other parts of the GI tract. "Eventually we think we will get to a fully ingestible capsule for the oral delivery of almost anything," added Schoellhammer.