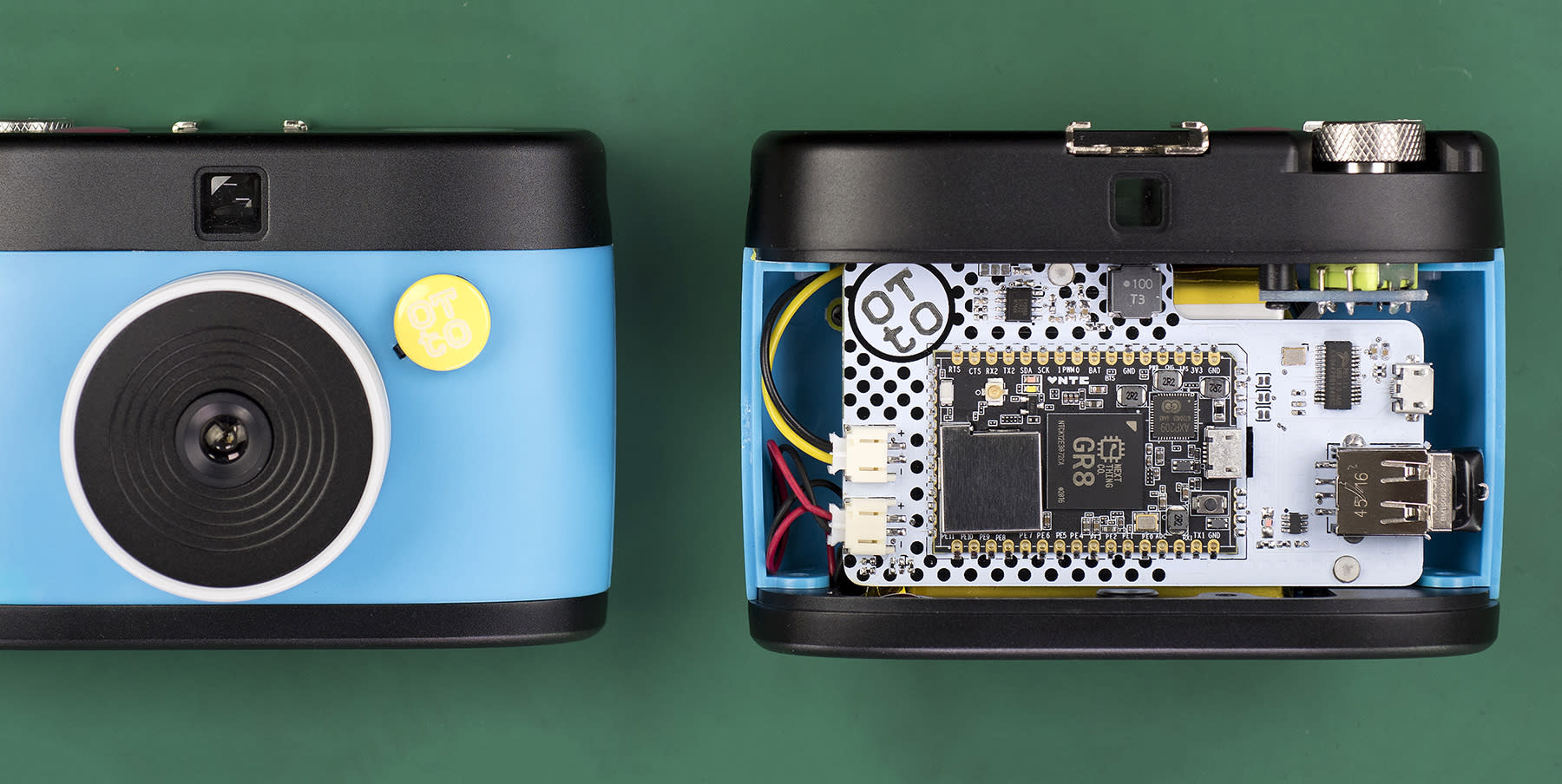 How an animated-GIF camera morphed into a nascent chip empire

There were no $10 computers, so Next Thing Co. built one.

Not many computers can thank GIFs for their existence. In 2013, Dave Rauchwerk worked on a San Francisco art installation that allowed people to record and project a GIF of themselves onto a building. It was popular and led to Rauchwerk joining with two friends to start a hardware company called Next Thing Co. Their aim? To create a camera that can capture GIFs for $100.

After a long stay in China with the HAX Accelerator, Next Thing Co. launched OTTO, a $250 "hackable GIF camera" in 2014. It was the first product to integrate Raspberry Pi's Compute Module, and generated a lot of interest. Keen mathematicians may have noted the discrepancy in the intended and actual price -- $250 is many more dollars than $100 -- and the public did, too.

"We had as many articles written about it as we did products sold," said Rauchwerk. "That turns out to be a really impressive number of articles and a really unimpressive number of units. About 400." People wanted it, it seemed, but not for $250. "We always had this dream that distributors and retailers would call us and want it in stores," he continued. They did call, but when it became clear that OTTO was being sold for cost, interest quickly dried up. Next Thing Co. had a problem, and it wasn't unique. Any hardware startup will face the same struggle: How do you build a computer with storage, battery power, charging, WiFi, an operating system and web services without spending a fortune? In 2014, there was no clear answer. "It was sort of akin to building a web service in 1996," Rauchwerk said. "You had to build the web server and the infrastructure before you could even think about building your product." Modern-day developers have access to a vast library of tools that make building out a web service far easier.

The cost of building a product should be around a third of its retail price. That meant, in order to build the OTTO at $100, the bill of parts and assembly should have been around $33. That left, by Rauchwerk's estimate, $10 for the computer inside. The Raspberry Pi Compute Stick was, and even in its latest iteration remains, a $30 computer. With no clear option available, Next Thing Co., in startup parlance, "pivoted," resolving to find a solution to building cheaper computers. "We'd seen those $50 Android tablets that were around a few years ago," Rauchwerk said, "and we wondered why we couldn't we take those parts, throw away the bits we don't need and build a $10 computer?"

The company making those parts was AllWinner Technology, and the relationship between Next Thing Co. and the chip company led to C.H.I.P., a $9 computer that raised $2 million on Kickstarter. C.H.I.P. essentially took an old processor, worked out how to make it support mainline Linux (i.e., the latest version) and added it to a PCB with some extras.

Including the Kickstarter orders, Next Thing Co. has sold over 100,000 C.H.I.P. computers. But despite this success, the company still hadn't reached its goal. People were building prototypes, sure, but when it came to actually turning those early designs into products, there was no path forward. "People started saying, 'Well, I have a couple of these, but I want 10,000 of them, or even more, I want 50,000 or 100,000 of them and I want to put them in my product,'" Rauchwerk said. The original C.H.I.P. may have been perfect for tinkering, but it wasn't ideal for consumer products. And so Next Thing Co. built C.H.I.P. Pro, which solves pretty much all of the issues the original has. It's 72 percent smaller, it's optimized for mass production, even supporting robot placement on assembly lines, it's reliability tested and it's FCC-certified. C.H.I.P. Pro costs $16 and can be built at that price in quantities from one to a million. Rauchwerk claims there's no upper limit on the number Next Thing Co. can produce, adding that you can go from prototype to product in 60 days.

Next Thing Co.'s computer offers a mediocre level of power compared to the chips inside a smartphone or tablet, but that's not really a problem. The chip powering it is called the GR8, a custom system-in-package (SIP) containing a 1GHz Cortex-A8 processor with ARM's NEON architecture extension, 256MB or 512MB of high-speed RAM and a Mali-400 GPU. According to Rauchwerk, it's "quite a bit faster, in application, on a single-core basis than a Raspberry Pi." It's also, depending on the software, able to sip power frugally. Rauchwerk said that people have used C.H.I.P. Pro to build devices that only need charging once a year. In addition to selling the complete package in the form of C.H.I.P. Pro, Next Thing Co. is also offering the GR8 separately. It can be integrated into products that don't need the extras on the Pro's circuit board. All you really need to turn the GR8 into a functional computer is storage and power, so if a product calls for a different WiFi module, power supply or more storage than the Pro offers, you can design your own circuit board and add the GR8 chip to it for just $6 per unit. "The really fun thing," Rauchwerk said, "is that you can start your product on C.H.I.P. Pro and switch to GR8 and not really have to change the software. They run the same chip and they're software-compatible."

Both C.H.I.P. Pro and GR8 can be flashed with a user or company's software inside the factory. "This sounds like a little detail, but in practice, this is one of the most time-consuming parts of building a device," Rauchwerk said. "If you order 10,000 modules then you'd have to spend 20 minutes putting the software on each one." This service is available for orders of more than 1,000, putting it within the reach of those considering smaller hardware projects.

Support for mainline Linux was useful for C.H.I.P., but it's way more important for Pro and GR8. You probably heard about Mirai -- a botnet made of over 100,000 Internet of Things (IoT) devices that briefly brought the internet to its knees last year. Mirai, and botnets like it, exist because millions of devices are connected to the internet using software with huge flaws. Running mainline Linux doesn't magically make a device secure, of course, but there are internet-connected cameras, DVRs and other IoT devices that are running versions of Linux that are several years old. This makes them much more vulnerable than an up-to-date device.

Next Thing Co. also has cloud-based tools for security and device management that are in the hands of early partners but aren't yet publicly available. This suite of software is intended to take make pushing security and feature updates to devices simple for companies. "We want people to focus on building their products, not working on how to keep them secure," Rauchwerk said. "Leave that up to the experts."

One thing that sets C.H.I.P. Pro and GR8 apart from other chips on the market is the lack of a nondisclosure agreement. While the Raspberry Pi Foundation is an extremely open organization, the company that supplies its SoCs, Broadcom, is not. There are NDAs in place to prevent Pi from making Broadcom's system architecture public, making it harder to develop for. In contrast, the GR8 is open-source hardware -- you can even look through Next Thing Co.'s GR8 architecture document on Github.

With C.H.I.P. Pro and GR8, companies and individuals can take a prototype based on C.H.I.P., Raspberry Pi or any microcomputer, and quickly turn out a product that can be sold at scale. Rauchwerk said "thousands of companies" are doing just that, but he can talk about only a couple of products: TRNTBL and Outernet. TRNTBL is a smart turntable that can identify songs and stream vinyl to wireless speakers, using C.H.I.P. Pro as its foundation. Outernet is a kind of wireless library. It downloads data from Khan Academy, Wikipedia and others via satellite link, and creates a WiFi hotspot so people without an internet connection can still access some of the knowledge on the web.

In addition to enabling companies to build products, Next Thing Co. is also building its own. Its first since announcing the C.H.I.P. Pro is a $49 voice assistant for use in a car, called "Dashbot," which is powered by the GR8. The developer kit for C.H.I.P. Pro comes with a pair of MicroElectrical-Mechanical System (MEMS) microphones on the board to help people prototype voice-based interactions. "We're seeing people use it with [Amazon] Alexa voice service and different APIs to build AI-connected devices at a price that's never been seen." You can think of Dashbot as almost a call-to-arms for companies looking to build low-cost voice assistants.

Next Thing Co. is working with everyone from tinkerers building projects in their garages all the way up to "brands with products you can find at Best Buy," and hardware will start hitting shelves this year. Becoming a chip giant is a far cry from Next Thing Co.'s original mission to build an animated GIF camera. Rauchwerk said that, if he wanted to, he could now sell the OTTO camera for substantially less than $99.

As if to prove a point, at CES earlier this month the company brought along a functional prototype OTTO with a C.H.I.P. Pro debug board inside. There doesn't seem to be much of an interest in moving forward with that product anytime soon, but who knows? Maybe the dream of an animated GIF camera isn't dead yet.