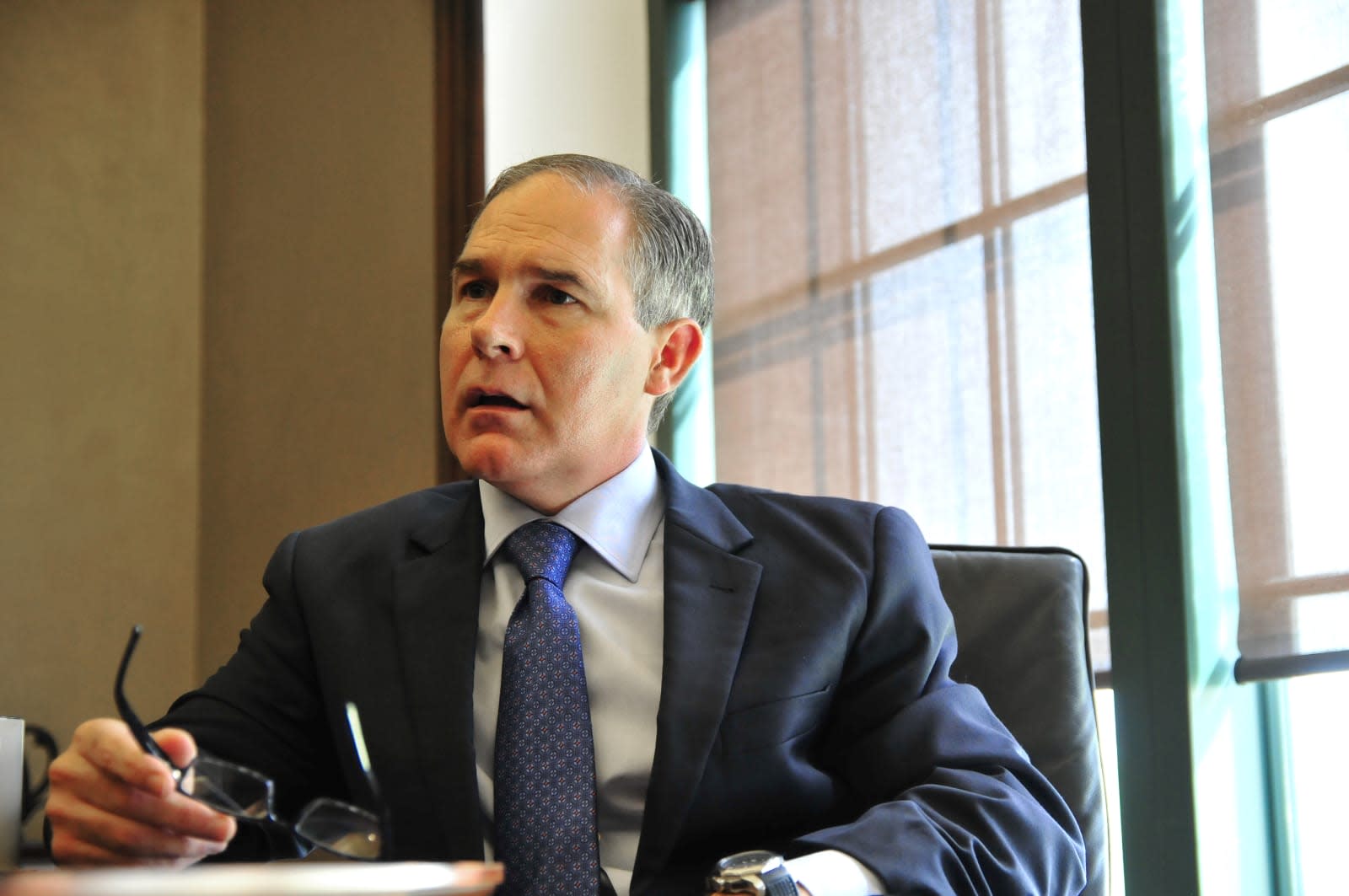 Donald Trump's administration has frozen all grants and contract operations at the Environmental Protection Agency, ProPublica reports. The freeze could disrupt critical, ongoing projects such as toxic cleanups and water quality testing, and it may impact the EPA's budget allocations. The EPA currently has $6.4 billion worth of federal contracts, which it uses to organize clean-up and testing services across the country. It's unclear how long the freeze will be in place or whether it will impact only new grants.

The person tapped to lead the EPA, Scott Pruitt, has indicated that he doesn't accept the science behind climate change, and as Oklahoma attorney general, he has sued the EPA multiple times. The Trump administration has vowed to eliminate a range of federal protections against climate change, including the Climate Action Plan and Waters of the US Rule. All references to climate change have been scrubbed from the White House website, as well.

An EPA contracting officer said in an internal email obtained by ProPublica that the agency was in "a holding pattern."

"The new EPA administration has asked that all contract and grant awards be temporarily suspended, effective immediately. Until we receive further clarification, this includes task orders and work assignments," the email said. Other employees indicated that this was an extreme move, ProPublica reports.

Myron Ebell, who led the transition at the EPA, confirmed the freeze to ProPublica but said it was similar to what previous administrations have done.

"This may be a little wider than some previous administrations," Ebell said.

On top of the EPA freeze, multiple federal agencies -- including the US Department of Agriculture and Department of Health and Human Services -- have been banned from sharing information about research findings or new initiatives with the public, according to multiple outlets. On Monday, the USDA's main research branch, the Agricultural Research Service, was told to stop communicating about taxpayer-funded work, BuzzFeed News reports.

"Starting immediately and until further notice, ARS will not release any public-facing documents," ARS Chief of Staff Sharon Drumm said in an internal email obtained by BuzzFeed News. "This includes, but is not limited to, news releases, photos, fact sheets, news feeds, and social media content."

Trump today also signed documents that reintroduce the Keystone XL Pipeline and Dakota Access Pipeline for government approval. After contentious debate, former President Barack Obama rejected the Keystone XL Pipeline in 2015, arguing that it would undercut the US' place as a leader in the fight against climate change. The Dakota Access Pipeline was a flashpoint in 2016 as members of the Standing Rock Sioux Tribe protested its construction less than a mile from their reservation. The protest was a success -- in December, the Army Corps of Engineers announced it would find an alternative route for the Dakota Access Pipeline.

Update (1/25/17): According to a report from E&E News (via The Verge), the freeze on EPA grants will end by Friday. The site is a news outlet for the energy and environmental industries. The report cites EPA officials as the source of the information, so perhaps an official announcement from the White House will be coming soon.

In this article: climate, ClimateChange, culture, donaldtrump, epa, HHS, NPS, politics, science, scottpruitt, trump, usda, whitehouse
All products recommended by Engadget are selected by our editorial team, independent of our parent company. Some of our stories include affiliate links. If you buy something through one of these links, we may earn an affiliate commission.