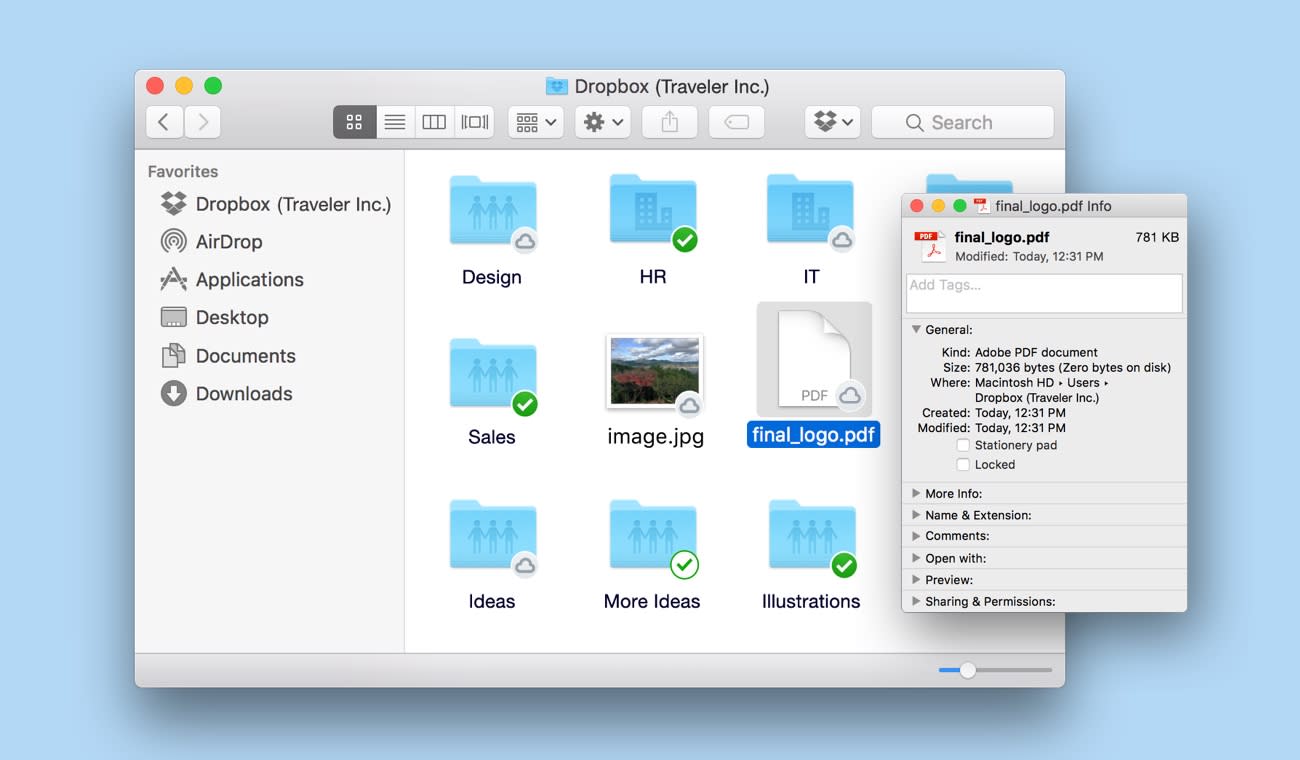 Last year, Dropbox introduced an interesting new feature called Project Infinite, which promised to let you view and access all of your files, whether they're on your hard drive or in the cloud. The idea here is that all your files will appear right there in your desktop, and you can view and make changes to them without having to launch Dropbox's web interface. Several months later and Project Infinite has left its beta state. Now, it's called Smart Sync, and it'll be available to all Dropbox Business users starting today.

A particularly useful highlight of Smart Sync is that it'll work on both Windows and Mac (backwards compatible with Windows 7 and up, or Mac OS X 10.9 and higher). Rob Baesman, Dropbox's head of product, says that this cross-platform and backwards compatible system is an "industry first." "You're free to collaborate with whoever you want," he said. "You don't have to think about space the same way you did in the past."

Another Dropbox product that's finally making its public debut is Paper, which has been in beta for almost two years. A Google Docs replacement of sorts, Paper is touted as an online collaboration tool with several other office-centric features thrown in. You can create a to-do list and assign them to team members, set due dates, organize content by projects, and of course do all the usual writing and editing too. A few months ago, Dropbox released mobile app versions of Paper for Android and iOS, which lets you do all of this on-the-go.

As part of its general launch, Dropbox is introducing a few new features to Paper too. There's Presentation Mode, a "Smart Meeting Notes" feature that sends everyone at a meeting the same document (provided you hooked Paper up to your Google Calendar), plus general usability improvements like improved search and better accessibility for screen readers. The company is also working on mobile offline capability in the coming months.

While Smart Sync won't be available to general users just yet, Paper is open to everyone with a Dropbox account starting today. It'll be available in 21 different languages.

Update: Dropbox also redesigned its website to be more team-friendly. It's a lot easier to swap between your personal and work accounts (via a toggle on the bottom left) and you'll get a single feed of updates of files and docs. Dropbox Badges, or avatars of your collaborators, also let you know who's seen a file and when.

In this article: dropbox, gear, internet, paper, personal computing, personalcomputing, projectinfinite, smartsync
All products recommended by Engadget are selected by our editorial team, independent of our parent company. Some of our stories include affiliate links. If you buy something through one of these links, we may earn an affiliate commission.