The best baby monitor is a simple night-vision camera

As a tech reporter, I've been pitched a whole host of smart baby monitors recently. That's partly because I work here, and also because I have easy access to an infant with whom I can test out such gadgets. Nanit, Cloudtot, Neebo, Owlet and Knit (to name a few) all claim that they can soothe the brows of novice parents like myself. But the more time I've spent with Project Nursery's 5-inch HD Video Baby Monitor, the less I want the extra bells and whistles. They're nice, for sure, but they aren't essential to the fairly simple practice of parenting. 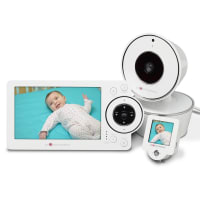 I hadn't bothered to buy a baby monitor when my girl was born because my wife and I knew we wouldn't need one for months. In those early days, you can't let your kid out of your sight for a moment; indeed, we still sleep with her in a cot at the foot of the bed. When it came time to finally get a monitor, I opted for a smart-ish one because, you know, I have a reputation to maintain.

Project Nursery's set comes with a micro-USB-powered night-vision camera that generates its own 2.4GHz wireless signal. Then there's the so-called Parent Unit, a boxy 5-inch display that looks more like a fancy home cinema remote than a baby gadget. In addition, the package comes with a "Mini Monitor," a 1.5-inch cube that can be worn on the wrist for more mobile monitoring.

The Parent Unit lets you control the camera, letting you reposition its angle like you're a security guard in a surveillance state. In addition, you can speak through the device's built-in microphone / speaker combination -- again, like you're an all-seeing guard. Unlike in a totalitarian regime, however, you can also play pre-recorded lullabies from the device to send your kid to sleep.

The experience of using it is actually pretty lovely. Setup took just five minutes and most of that was pulling the plastic packaging off. Being able to watch your child while you do the dishes, sterilize bottles or -- gasp -- stare at the TV is extremely useful. Still, I've found that the ability to watch her is pretty much all I need or want from my baby monitor; I know when she begins stirring and can quickly race upstairs to soothe her.

The device is not without its faults. For starters, the laughable notion that a cube standing an inch from your wrist is "wearable." I mean, you can, but you'd certainly only do it when nobody else is watching -- and I'm not admitting to that in front of all you. Then there's the fact that the Parent Unit is rated for 16 hours of battery life, but I find myself reaching for the charger after a combined eight or nine hours over two or three days.

Much like Owlet, the camera's base here has an obnoxious glowing light that can be distracting when you're trying to sleep. And the speaker, when it's replaying human voice, is sufficiently distorted and crackly that you'd probably wind up giving your kid more nightmares. Not to mention, as well, that the retail price for this device is $300, which is probably a little bit too much when you could roll your own solution for much less. Or buy the 4.3-inch version for $200, which will be a little easier on your wallet.

But, and I guess this is the point, the device does precisely what you want a baby monitor to do without too much friction. You plug it in, it sets itself up and boom, you can watch your kid so you don't have to sit in the same room. I don't need artificial intelligence to tell me how much sleep she's getting or the ability to view her on my smartphone. A night-vision camera and a portable display are all you really need because being able to see when she starts rousing means you can offer comfort. And that is worth its weight in gold.