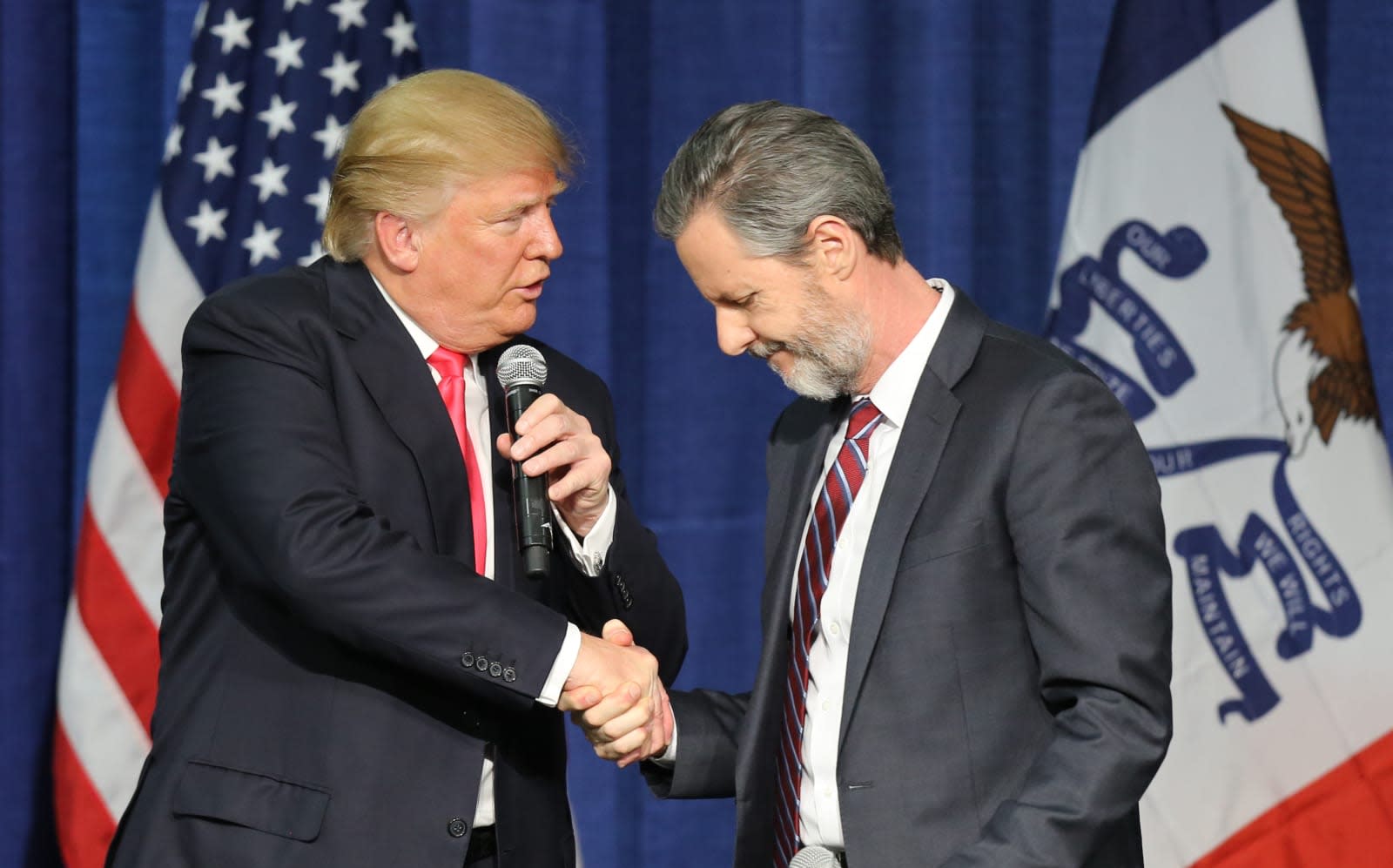 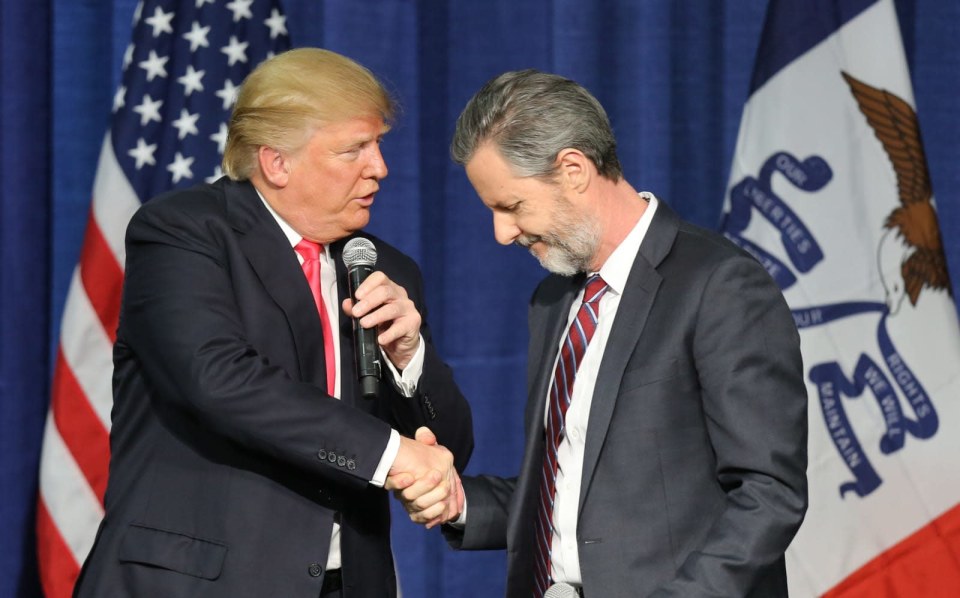 Donald Trump has already earned his reputation of nominating candidates for his cabinet-level positions who face stiff opposition from the science and tech community. He's given the nod to former Texas Governor Rick Perry, who once called on Congress to abolish the Department of Energy that he now heads, and EPA nominee Scott Pruitt, who, as Oklahoma attorney general, sued the EPA no fewer than 14 times. On Tuesday, Trump continued this streak by tapping Jerry Falwell Jr. to head up a presidential task force charged with suggesting reforms for the Department of Education.

Jerry Falwell Jr. is the president of Liberty University and one of America's most vocal evangelical Christian leaders. He's also the son of ultraconservative Southern Baptist pastor, televangelist and founder of the Moral Majority movement Jerry Falwell. Falwell the younger holds a JD from the University of Virginia School of Law as well as a BA in Religious Studies from the school he now governs. Given his pedigree, Falwell Jr's politics unsurprisingly skew far to the right.

Falwell is apparently not too big on the sciences, at least as they have conventionally been taught. That is, science courses at Liberty University take the Bible to be a historically accurate document rather than a collection of parables. Falwell's input could have a debilitating effect on the direction of higher education -- especially modern STEM courses -- when Liberty University issues textbooks such as these:

Jerry Falwell Jr. will be leading Trump's higher education task force. Here's a science textbook I was assigned at his school in 2007. pic.twitter.com/ba4GY4Lc8M

What's more, although his university offers advanced science classes with fully stocked labs, its faculty "takes pride in teaching evolution alongside biblical creationism," according to the Washington Post.

"Our students know what evolution is," David A. DeWitt, chair of the university's biology and chemistry department, told the Washington Post. "They know the evidence needed to support it." However, the faculty routinely contrasts those facts with stories from the Book of Genesis and promotes the young Earth creationist theory, which posits that the Earth is only a few thousand years old. In fact, the science hall's entrance is even inscribed with a Bible quote: "In the beginning God created the heavens and the earth."

Falwell's literal interpretation of Christian scripture also colors how his university treats women and minorities. He is clearly not a fan of the LGBTQ+ movement, if his school's draconian student code of conduct is any indication. "Sexual relations outside of a biblically ordained marriage between a natural-born man and a natural born woman are not permissible," the code reads. Nor is Falwell Jr. a proponent of sexual education. Liberty University's publication, the Liberty Champion, has repeatedly argued against the need for sexual education for both middle and grade school children. Rather than educate kids, the publication instead promotes an abstinence-only stance.

Falwell Jr. was among Trump's first and loudest evangelical supporters and was rewarded by being asked to lead the Department of Education. He reportedly declined, citing his desire to stay near his family and the university, in Virginia. He has strongly endorsed Betsy DeVos, the current nominee.

As for his new chairmanship, "The main thing that he is seeking to do for the task force is to eliminate what he sees as excessive regulation of educational institutions," Liberty University spokesman Len Stevens told NBC News on Tuesday. Specifically, "the goal is to pare it back and give colleges and their accrediting agencies more leeway in governing their affairs," Falwell Jr. told The Chronicle of Higher Education the same day.

"I've seen firsthand what the Department of Education is doing to college and universities, using the leverage of financial aid to micromanage college and schools with regulations that are overly burdensome," Falwell Jr. told the Wall Street Journal late last year. "Those are my particular areas of interest." The scope, size and specific mission of Falwell's task force has not yet been announced.

Unsurprisingly, Falwell's appointment has angered a number of congressional members. "Jerry Falwell Jr. checks all the boxes for an education post in the Trump administration: he is bigoted, unqualified, and reliably opposed to protecting students from predatory companies," Democratic California Rep. Mark Takano said in a statement on Wednesday. "As a gay man, I am enraged that his anti-LGBT rhetoric is being rewarded with a leadership post. As a former teacher, I am deeply concerned for students who will inevitably be exploited by unregulated for-profit education companies. And as an American, I continue to be appalled by President Trump's pattern of selecting unqualified ideologues to guide national education policy."

In this article: 2015 San Bernardino attack, 2ndamendment, BetsyDeVos, culture, DepartmentOfEducation, DepartmentOfEnergy, DonaldTrump, education, Jeff Sessions, JeffSessions, JerryFalwell, JerryFalwellJr, LenStevens, LibertyUniversity, Moral Majority, NBC News, politics, Rick Perry, RickPerry, Texas, Title IX, UsDepartmentOfEnergy, Virginia
All products recommended by Engadget are selected by our editorial team, independent of our parent company. Some of our stories include affiliate links. If you buy something through one of these links, we may earn an affiliate commission.