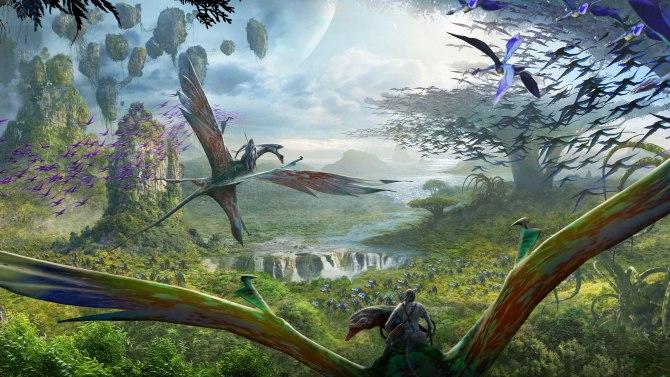 Disney CEO Bob Iger has announced that the entertainment giant will soon be opening a park based on James Cameron's Avatar. From May 27th, visitors to Disney World Orlando will be able to explore a large area based on the hugely successful sci-fi movie, imaginatively entitled "The World Of Avatar". Based in the park's Animal Kingdom, fans of everything blue will be able to experience the family-friendly water ride "Na'vi River Journey" and motion simulator ride '"Avatar Flight of Passage" as well as Avatar-themed bars, restaurants and gift shops.

In the same report, Iger also revealed that the much anticipated "Star Wars Land" will be coming to Disney's Hollywood Studios in 2019. While no new info was given on what fans can expect from "Star Wars Land", during an ABC Disneyland special last year, Harrison Ford revealed the concept art for the world and a few tidbits about the rides.

Interestingly, the rights to the Avatar franchise are actually owned by Fox. When James Cameron first approached that studio with the film in 2006, it initially passed on the project, only greenlighting the production after Disney showed interest a few months later. It was this previous interest in the project that led to the two companies agreeing on an exclusive licensing deal for an Avatar-themed park in 2011. Avatar 2 (the sequel now almost eight years in the making) is scheduled to release in December 2018.

In this article: av, Avatar, disney, disneyworld, entertainment, JamesCameron, StarWars, starwarsland
All products recommended by Engadget are selected by our editorial team, independent of our parent company. Some of our stories include affiliate links. If you buy something through one of these links, we may earn an affiliate commission.