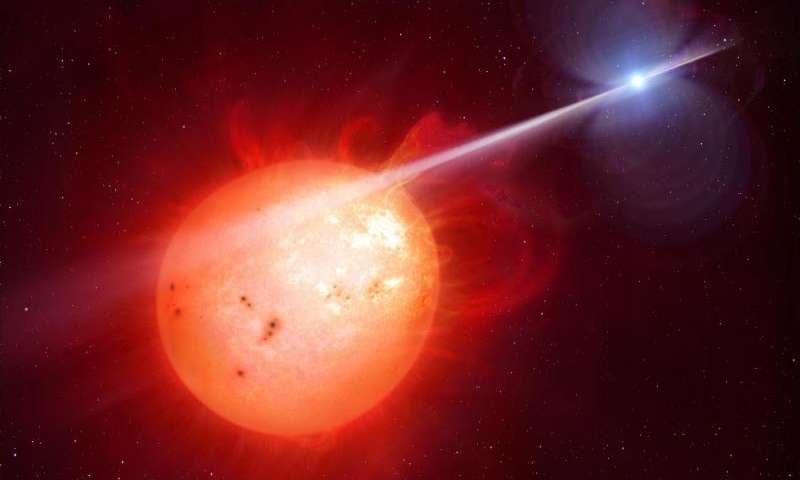 After decades of speculation, students at Warwick University have now found the first ever white dwarf pulsar. Since 1967's discovery of the first pulsar (a rotating star that emits electromagnetic radiation), scientists have only been able to find evidence of larger neutron stars as pulsars. For those of you who aren't astronomers, a neutron star is the last stage a celestial body goes through after a supernova before collapsing into a black hole. While scientists had yet to find any proof, many argued that the smaller dying white dwarf star could also become a pulsar. Now 50 years later, that theory has become fact.

The discovery was made by Tom Marsh and Boris Gansicke from Warwick University's Astrophysics Group alongside David Buckley from the South African Astronomical Observatory. The trio managed to spot a white dwarf pulsar 380 light years from Earth, located in the constellation of Scorpius. AR scorpii is the name they gave to the binary star that confirmed the aging hypothesis.

This historic binary star is made up of both a white dwarf around the size of Earth (but around 200,000 times denser) and a 'nearby' red star. With a distance only three times greater than that of the Earth and the Moon between them, the two celestial bodies are practically neighbors in galactic terms. Thanks to this relatively close proximity, the white dwarf pulsar bombards its poor red dwarf neighbor with all manner of electrical energy and particles during its two-minute rotational period. You can find more details about their historic findings here.

In this article: science, space
All products recommended by Engadget are selected by our editorial team, independent of our parent company. Some of our stories include affiliate links. If you buy something through one of these links, we may earn an affiliate commission.