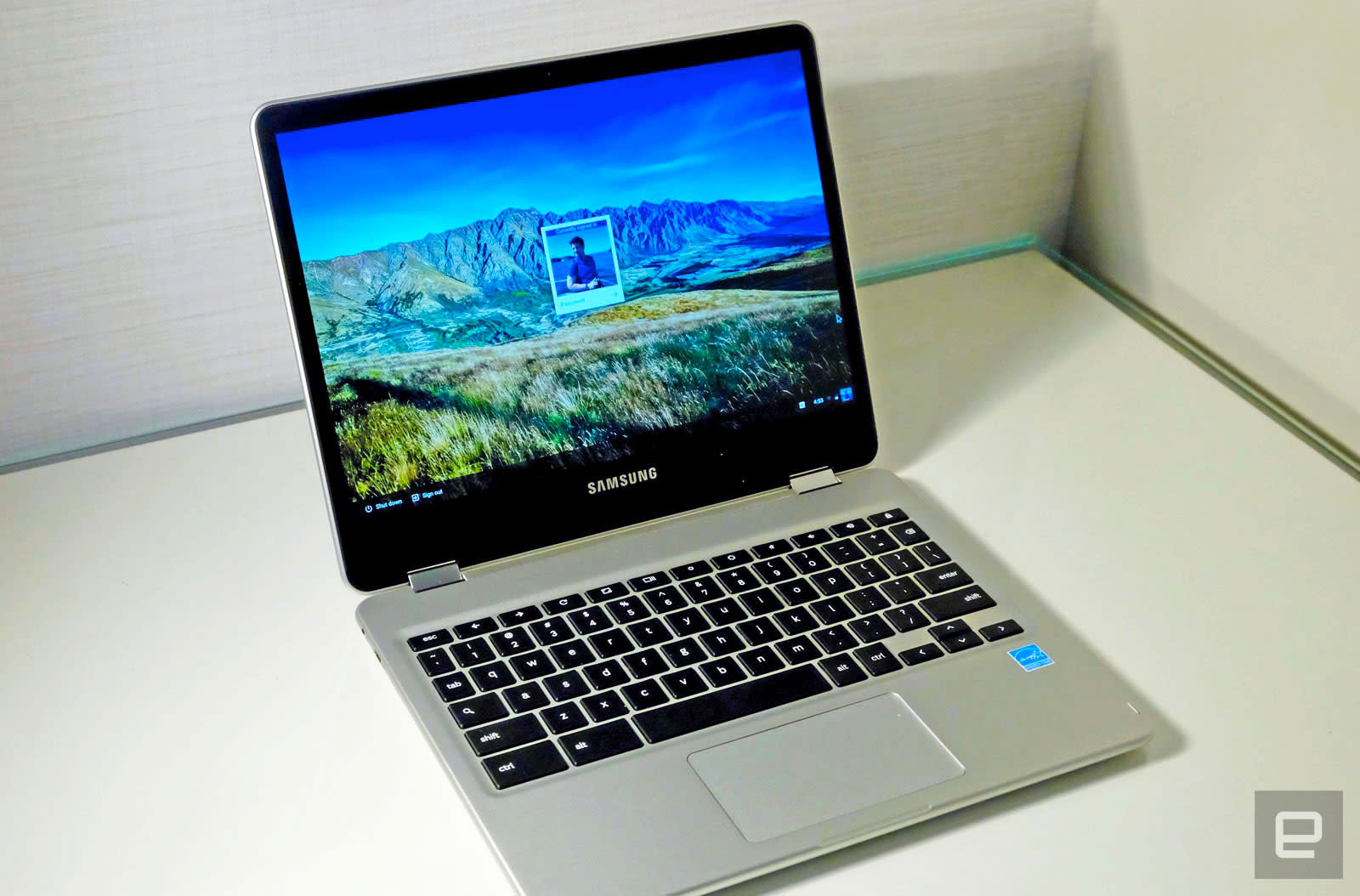 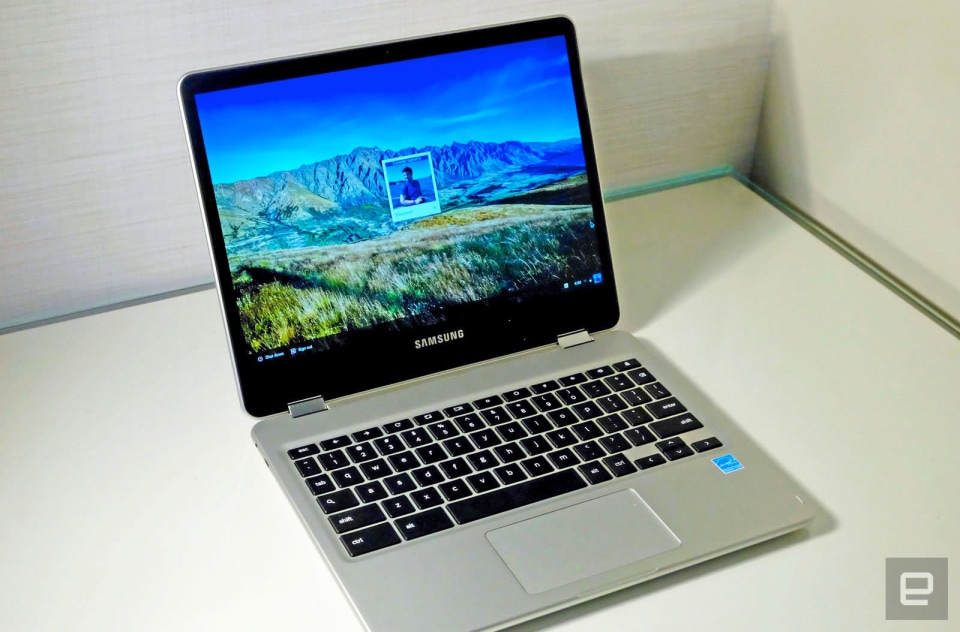 Samsung's forthcoming Chromebook Pro, which the company introduced in partnership with Google at CES last month, appeared to be the latest contender in my search for the perfect premium Chromebook. For me, that means a high-resolution screen, excellent keyboard and trackpad, and a battery that lasts all day. I'm also looking for a well-designed machine, not the cheap, netbook-inspired computers that were the hallmark of earlier Chromebooks.

On the surface, the Chromebook Pro offers all of that, along with a few new hardware and software tricks. It's the first Chromebook specifically designed with the Google Play Store and Android apps in mind. It's also the first Chrome OS device with a stylus, and Google added new features to its Keep note-taking app to make it work with a pen. Samsung and Google claim that the machine learning prediction should remove latency to the point that it feels like writing on the Surface Pro 4 -- one of the best stylus experiences available. Of course, more than a quick CES demo is needed to see how the Chromebook Pro stacks up -- so I've been putting the device through the wringer over the last week and a half. However, this is not a formal review. Samsung provided reviewers with pre-production units; the final, finished product (which will ship in black, not the silver you see in these photos) won't ship until the end of April. With a few months to go, I wanted to give Samsung and Google some advice on what they can improve between now and launch time. When the Chromebook Pro eventually hits the market, we'll revisit it in the form of a scored review.

The biggest issue with the Chromebook Pro also happens to be its most unique feature. The combination of stylus (which is basically identical to what you'd find in Samsung's Galaxy Note phones) and pressure-sensitive display is currently way too laggy to be useful. During a joint demonstration for reporters late last month, Samsung and Google specifically said how lag kills the experience of writing on a screen -- but right now, I'm always waiting for the screen to catch up with my pen strokes. Yes, I can technically take notes on this screen, but it's not the experience Google promised. And it's definitely not as good as the input experience on an iPad Pro or Surface Pro 4. At this point, I've pretty much given up on using the Chromebook's pen. It's important to note that Google says it hasn't yet turned on the machine learning writing assist in the version of Chrome OS that I'm running. That's part of the problem with using a pre-production machine: Some things just aren't ready yet, making the device difficult to evaluate. As it stands, this potentially unique feature adds nothing to the experience.

Another problem is how Chrome OS plays with Android apps. This feature has been in the works for months, but it still doesn't feel ready for prime time; there are issues with both performance and implementation.

Performance simply needs to be better for it to be worth running these apps alongside standard Chrome apps. Tools that I use daily (e.g., Google Play Music, Wunderlist, Pocket, Netflix, Google Calendar, Inbox and Google Docs) worked just fine -- but in most cases, the web versions were faster and better optimized for laptops than their Android counterparts. What's more, the games I tried (including Alto's Adventure, Dots & Co, Rayman's Adventure and the Google-recommended Asphalt 8) all felt laggy compared to how they run on Android phones and tablets. Consistently dropping frames when playing games is a big problem that defeats the purpose of playing them in the first place. The good news is that performance seems to have improved in the few weeks I've been using the Chromebook Pro, thanks to a series of software updates. Google will be gathering data on the Play Store and Android app usage in the next few months -- the Samsung Chromebook Plus (a laptop that's identical to the Pro with the exception of a weaker ARM processor) hits stores this Sunday, with the beta Play Store included. Hopefully the company will continue to optimize Android performance over the next few months before the Pro launches.

There's also the simple matter of what the experience of using Android apps on a Chromebook will be like for first-time buyers. By default, a Chromebook's app drawer is loaded up with what are essentially web-app links for Google services likes Docs, Drive, Gmail, Keep and Photos, among others. But you can also download those same apps from the Play Store. If you want offline access to Google Play Music or Movies, for example, you'll need the Android apps. But the rest of the time, the web versions seem to work better. They were designed for traditional desktop computers, after all.

Users can also end up with multiple versions of the same app and not really know which is which, or which is better to use. For example, I've used the Wunderlist Chrome app for a long time, but I also installed the Android version to see which is better. The website feels more fluid to me, but the Android app pops up notifications for my reminders. That's quite helpful for a reminders app, but using the Chrome version is generally a better experience. Which should I use?

Running Android apps on Chrome OS is a lot like using an Android tablet: The whole experience just isn't optimized for a bigger screen. The Hangouts Android app, even when full-screen, is just one giant pane showing either your list of ongoing conversations or the details of whatever chat you're in. The Chrome app, on the other hand, has two panes, making it much easier to jump between threads. Similarly, I thought having Facebook Messenger running in a small vertical window on the side of my screen might be handy. But you can't resize the app, it only runs in portrait mode, and tapping enter doesn't actually send a message. You instead need to click on the "send" button, which slows things down. All told, my experience running Android apps was mixed at best. Generally, most web services are good enough at this point that the experience is superior to running Android on a laptop. The obvious exception is offline mode, but I'm offline infrequently enough that this didn't change my opinion. I still think there's potential here, but a good amount of refinement is needed, along with a tutorial to help new buyers understand when to use Android apps versus web apps.

Another thing I hope to see Samsung and Google improve is the Chromebook Pro's battery life. The computer is rated for eight hours of usage, but I typically got little more than six. And the computer takes a long time to charge -- more than two and a half hours to go from three percent to full. That said, 90 minutes got me to about 88 percent, which was more than enough for another half-day of work. Although the battery itself is likely to be the same at launch, perhaps further software optimizations will get the computer to that eight-hour mark.

To end on a positive note, I think it's worth discussing some of the things that the Chromebook Pro does right. For starters, the form factor hits all the right note for me. While Samsung's design language hasn't changed much over the years, it nonetheless makes for a pleasing look. The rounded corners make it comfortable both for typing and carrying -- and they also give it a distinctive aesthetic that helps keep the laptop from looking like yet another MacBook Air clone.

That quality isn't skin-deep either. The Chromebook Pro feels much more sturdy than HP's similarly priced Chromebook 13. The all-important keyboard and trackpad are similarly reliable. They both feel slightly cramped compared to my MacBook Air, but the keys themselves are responsive and there's nothing wrong with the trackpad aside from being a little small. The 2,400 x 1,600 display is also a highlight. It's bright and sharp, and features the same 3:2 aspect ratio as the now-discontinued Chromebook Pixel. That might mean wider black bars when you're watching a movie, but the majority of the time I really appreciated the extra vertical screen real estate. The laptop's default 1,200 x 800 scaled resolution means most UI elements are pretty large, but scaling things up to 1,350 x 900 gave me more room for my content. The hinge in particular feels both strong and smooth, with no sticking or hitches as it moves from laptop to tablet mode. And while software problems made writing on the screen less than ideal, the hardware side of the equation is actually pretty good. There's a slight bit of resistance when using the stylus that makes it feel more like a writing instrument on paper and less like a stylus sliding across slick glass.

Given this computer's pre-production status, I'm not ready to say whether or not it's worth the $550 asking price. That will depend on how much Google improves the software experience over the next few months. Simply turning on the machine learning feature should make using the stylus much smoother, and Google will continue optimizing Android app performance in the coming weeks.

But it remains to be seen if this is the Chromebook that will convince people to pay a more premium price. I'm cautiously optimistic because I've been looking for a higher-quality Chromebook for a while. But if you just want an inexpensive laptop for getting things done, there are plenty of cheaper options available now. For the time being, those of you who want a premium Chromebook should wait until April to decide if Samsung deserves your cash.

In this article: chromebook, chromebookpro, chromeos, gear, google, impressions, personal computing, personalcomputing, preview, samsung, samsungchromebookpro, uk-feature
All products recommended by Engadget are selected by our editorial team, independent of our parent company. Some of our stories include affiliate links. If you buy something through one of these links, we may earn an affiliate commission.