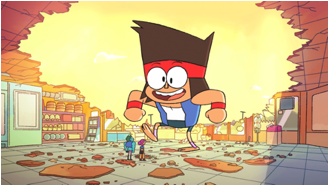 If the words "multimedia tie-in" bring back memories of bad video game adaptations and lame comic books pushed by marketing groups to promote feature films, then clearly the 80s and 90s have scarred you too. Cartoon Network's upcoming animated series OK K.O.! Let's Be Heroes is getting its own game, which would seem gimmicky if not for the the studio they brought on to make the show's companion: Capybara Games, creators of the acclaimed Superbrothers: Sword and Sworcery and Super Time Force. The game, an "action brawler with RPG elements," will come out this fall.

The new series by Ian-Jones Quartey, based on his animated shorts released last year, follows K.O. and his mallrat friends hanging around a hero-populated shopping center as they level up and fight bad guys. Clearly, this meta premise bodes well for Capybara Games, which loaded its previous titles with sly genre-aware comments and dialogue. The show is set to come out this summer with the game to follow on console and PC in Q3 2017 -- but if you're at PAX East this weekend, you see preview footage and chat with creators from Cartoon Network and Capy about the game.

In this article: animation, av, capybaragames, CartoonNetwork, gaming, OKKOLetsBeHeroes
All products recommended by Engadget are selected by our editorial team, independent of our parent company. Some of our stories include affiliate links. If you buy something through one of these links, we may earn an affiliate commission.