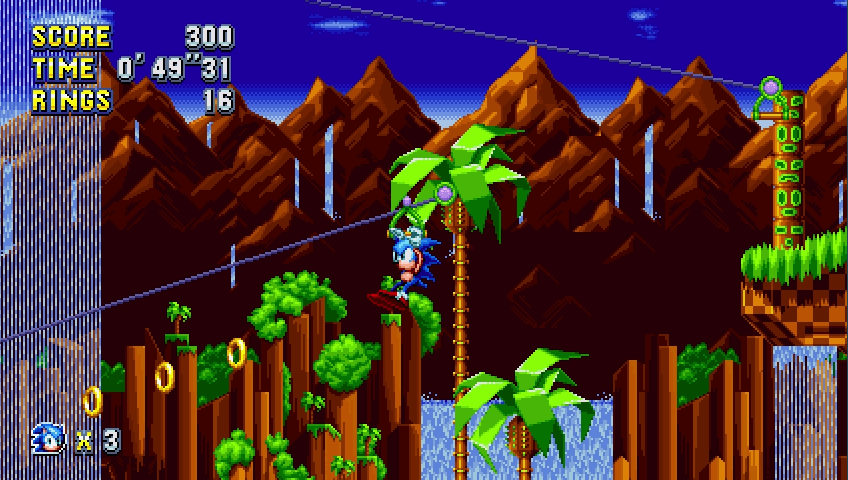 When Sega invited me behind closed doors to get an early look of Sonic Mania at GDC last month, I wasn't expecting much. I'd seen the trailers and indeed, it looked like a grand homage to franchise, but I was surprised to find that the game is more than that. Mania doesn't just bring players back to the 16-bit era with classic graphics and gameplay -- it adds to it. This retro Sonic throwback gifts its mascot with new abilities, new levels and incredibly smooth pixel animation.

Think of Sonic Mania as an evolved approach to how Christian Whitehead handled the Sonic The Hedgehog, Sonic The Hedgehog 2 and Sonic CD HD remasters. It embraces the spirit of classic Sonic games while subtly improving upon almost everything -- starting with the heroic blue rodent himself. "Tails flies, Knuckles can glide and climb," Sega's Aaron Webber told Engadget. "Sonic had nothing." Somehow, the game's titular character became its least versatile. Sonic Mania fixes that, giving the blue hedgehog a new "drop dash" move that lets the player drop down from a jump into an accelerated, controllable spin-dash attack. Once on the ground, players can instantly change direction without coming out of the attack. It's a simple, easy-to-use move that finally puts Sonic on the same level as his sidekicks.

Sonic Mania also makes the most of modern hardware. Sure, it still looks like a game plucked out of the Sega Genesis library, but it's tuned to run at 60 frames per second. That may not sound like much, but it's the kind of specification boost that allowed the team to cram in beautiful, fluid character animation. Simply put, there are more animation frames in every action Sonic and friends perform, from the way the blue hedgehog cranes his neck to look up to Tails' end-level victory dance. This smooth character work really shines on the game's title screen, where Sonic performs a 360-degree spin within the frame of the game's logo. "That took the animator almost two weeks," Webber said. "There's a huge amount of frames in it." Indeed, it looks gorgeous.

Despite these gameplay and technical changes, Sonic Mania still feels very much like a classic Sonic title. That's probably because most of the staff are die-hard Sonic fans with roots the fan community and experience making unofficial hedgehog games. The passion shows in the painstaking recreation of the first game's Green Hill Zone (an homage filled with new secrets and areas to explore) and Studiopolis Zone, a new level that merges the flash of the classic Casino Night Zone with a Hollywood theme. Webber says the team "tried to find a balance between 'We're making something new,' and 'We're making something that isn't too far from what the originals were.'" The final game isn't due out until later this year, but if my early impressions are anything to go by, Sega nailed it.

In this article: av, christianwhitehead, games, gaming, gdc, gdc2017, hands-on, headcannon, pagodawestgames, sega, sonic, sonicmania, sonicthehedgehog, videogames
All products recommended by Engadget are selected by our editorial team, independent of our parent company. Some of our stories include affiliate links. If you buy something through one of these links, we may earn an affiliate commission.