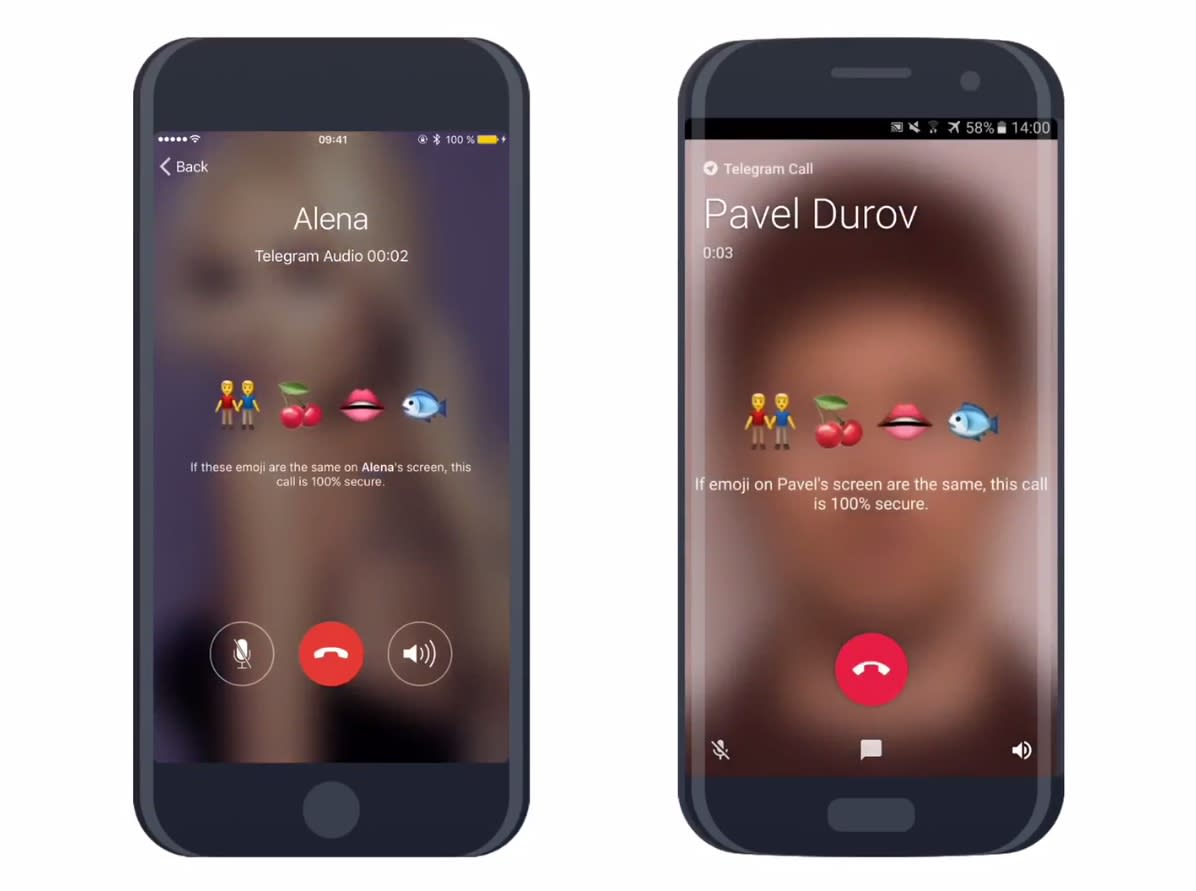 Questions about security have plagued messaging app Telegram recently, since the platform was supposedly cracked by Russia's state security agency during the election. Telegram uses its own security protocols instead of more tried-and-true options, which has been a point of criticism. Now, Telegram is adding voice calls to its offerings, and those calls will be secured by emojis.

The service is available in Western Europe starting today, and Telegram says users worldwide will get the feature soon. When a call connects, the participants are shown a set of four emojis. If both users find that they're seeing the same group of emojis, the call is completely secure. To make the system easy to use, Telegram picks its emojis from a pool of 333 characters "that all look quite different from one another and can be easily described in simple words in any language." This means that there are nearly 12.3 billion possible four-emoji combinations.

This encryption system is based on the Diffie-Hellman key exchange, which was patented in 1977. If Diffie-Hellman sounds familiar, that could be because it was partially what caused the Logjam browser and website encryption vulnerability in 2015. However, those issues have long been resolved and it's possible for a secure key exchange to work on this system.

As for the rest of the voice call features, there shouldn't be much of a learning curve. The call screen looks like that of most modern phones, meaning it appears simple and easy to use. Going back under the hood, Telegram also features a neural network that studies users' calling habits and learns how to best optimize audio and connection quality. For example, calls will sound best on WiFi, while weaker connections will use less data. Regardless of your reception, Telegram calls will always adapt to your connection speed to use as little data as possible. There's also the "Use Less Data" option, which sacrifices sound quality but promises to "reduce your data spending by another 25-30%."

This app update (version 3.18) also adds an interesting option for sharing video. Users sending videos can adjust the compression and see the quality of video the recipient will be watching, which Telegram says is a first.

In this article: diffiehellmanprotocol, emoji, Emojis, gear, mobile, phone, security, Telegram, TL17EMOJ, VoiceCalls
All products recommended by Engadget are selected by our editorial team, independent of our parent company. Some of our stories include affiliate links. If you buy something through one of these links, we may earn an affiliate commission.