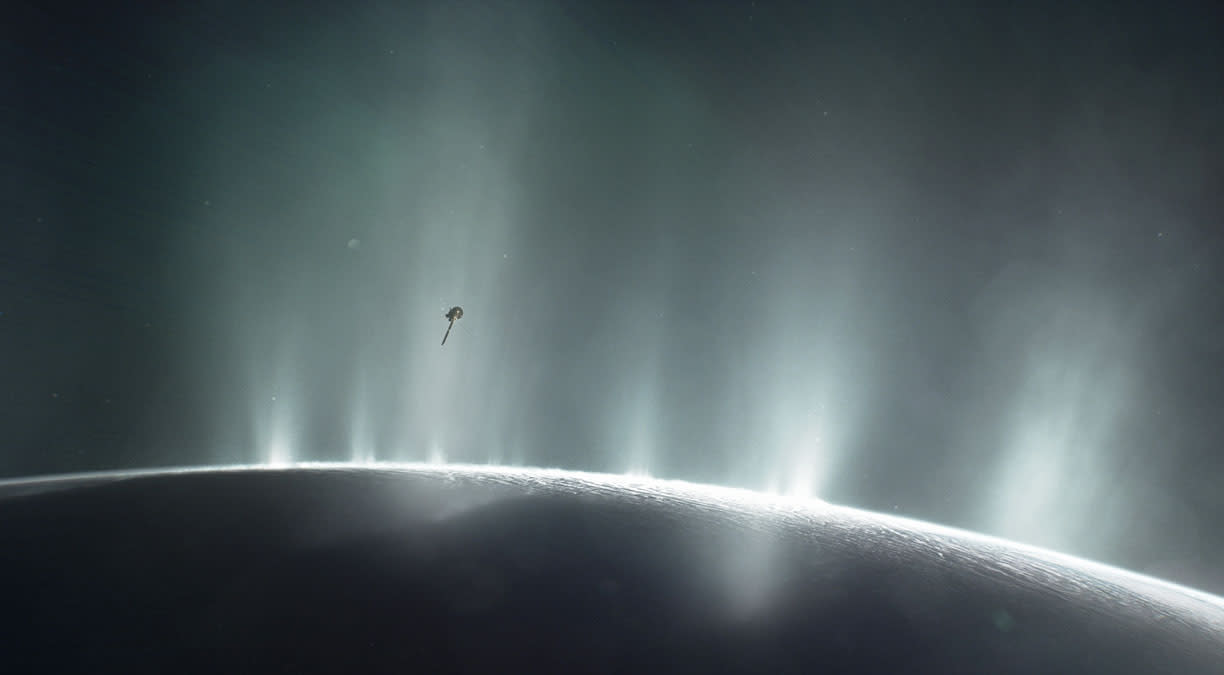 Scientists recently took a closer look at data over a decade old and concluded that two moons orbiting Saturn and Jupiter might have environments that foster life. During an October 2015 flyby of the ringed planet's moon Enceladus, the probe Cassini was hit by gaseous plume, which was likely a hydrothermal vent breaking through the iced surface. Scientists theorize that the spray is evidence of chemical energy for life to feed on. Thanks to sporadic evidence of plumes on Jupiter's moon Europa, NASA has announced that two locations in the solar system might support living organisms.

Jupiter & Saturn's moons identified as #OceanWorlds w/ "some of the ingredients needed for a habitable environment" https://t.co/6JQQTUlRr1 pic.twitter.com/RJh5miNHeY

The Enceladus plume Cassini flew through had traces of hydrogen, according to a paper appearing in the journal Science written by the probe's team. The scientists believe the gas is likely produced by a chemical reaction involving hydrothermal vents at the bottom of the moon's ocean. Earth has some of these on its sea floors, where hydrogen combined with carbon dioxide produces methane in a process called "methanogenesis," which is theorized to be a core component for microbial life on our planet.

To be clear, scientists haven't discovered evidence of organisms on Enceladus, but they encouraged by the processes producing chemical energy, which could feed life. If they end up finding any, it likely wouldn't resemble Earth's since it would generate from a different chemical environment, the scientists said during today's stream announcing the findings. Any life, even bacteria, would be a welcome find. But similar plumes have erupted less frequently on Jupiter's moon Europa, which has a similar icy shell to Enceladus, presenting potentially correlating life-fostering conditions.

Scientists at the Goddard Space Center compared ultraviolet photos the Hubble space telescope took of Europa in 2014, when it first saw the gaseous spray emanating from the moon, and found it again in a 2016 picture. While it was two incidents captured out of twelve total photos taken of the plume's location, which could be evidence of an unknown instrumental flaw, that's enough evidence to keep looking. And the potential for hydrothermal similarities to Enceladus is supported by thermal imaging captured during a flyby of Europa by the Galileo probe over 15 years ago, which saw heat activity right below the plume location.

Cassini will plunge into Saturn on September 15th in a spectacular "Grand Finale, so there's little opportunity for it to capture more photos of Enceladus. But the Europa Clipper Mission coming in the 2020s will pull off a flyby of Europa on the way to its main mission surveying Jupiter. Its thermal imaging will take a closer look at the same hotspots Galileo captured in photos over 15 years ago, along with a few extras like ultraviolet sensors to capture more specific data. Now that they know where to look and what they're looking for, the upcoming mission will put an intense lens at one of the first areas in our solar system that might contain life.

In this article: cassini, Enceladus, Europa, europaclipper, extraterrestrial, ExtraterrestrialLife, Galileo, jupiter, moon, saturn, science, space, TL17CASS
All products recommended by Engadget are selected by our editorial team, independent of our parent company. Some of our stories include affiliate links. If you buy something through one of these links, we may earn an affiliate commission.