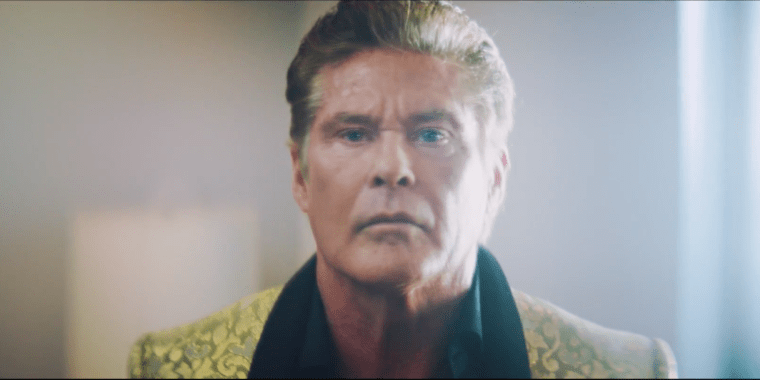 Robots are slowly taking more and more jobs -- and soon, they'll come for the writers (gulp). That's the pitch behind director Oscar Sharp and AI researcher Ross Goodwin's short film It's No Game, in which an artificial intelligence swoops in during a Hollywood writer's strike to pen a script for the immortal David Hasselhoff. But the video is something of a meta rabbit hole itself, as all of the Hoff's dialogue was written by an AI called Benjamin, which was built to scribe an experimental short film last year. Whoa.

To make Benjamin, Sharp and Goodwin took a neural network, fed it a bunch of science fiction films and dribbled in plot hooks from a writing contest. Then they had it create a script for their sci-fi tale Sunspring, which was released last year. The film, featuring Silicon Valley's Thomas Middleditch, is an enjoyably incoherent mess that somehow gets across its characters' emotional journeys. But the short film It's No Game goes deeper down the meta-hole, inserting Sunspring into its plot as a world-changing film that leads the Benjamin AI to take over people's actions -- and write the dialogue for the drama of their lives.

To sum up this meta-tangled mess: A director and AI researcher built an artificial intelligence that wrote a bonkers script for one film, then the humans had it write another one with even more self-aware references and commentary. "Who am I?" Hasselhoff asks the camera at the end of It's No Game after he's been puppeteered by AI-controlled nanobots. Then he gets up and walks away wearing his iconic red Baywatch shorts.

In this article: ai, ArtificialIntelligence, av, DavidHasselhoff, entertainment, personal computing, personalcomputing, ShortFilm
All products recommended by Engadget are selected by our editorial team, independent of our parent company. Some of our stories include affiliate links. If you buy something through one of these links, we may earn an affiliate commission.