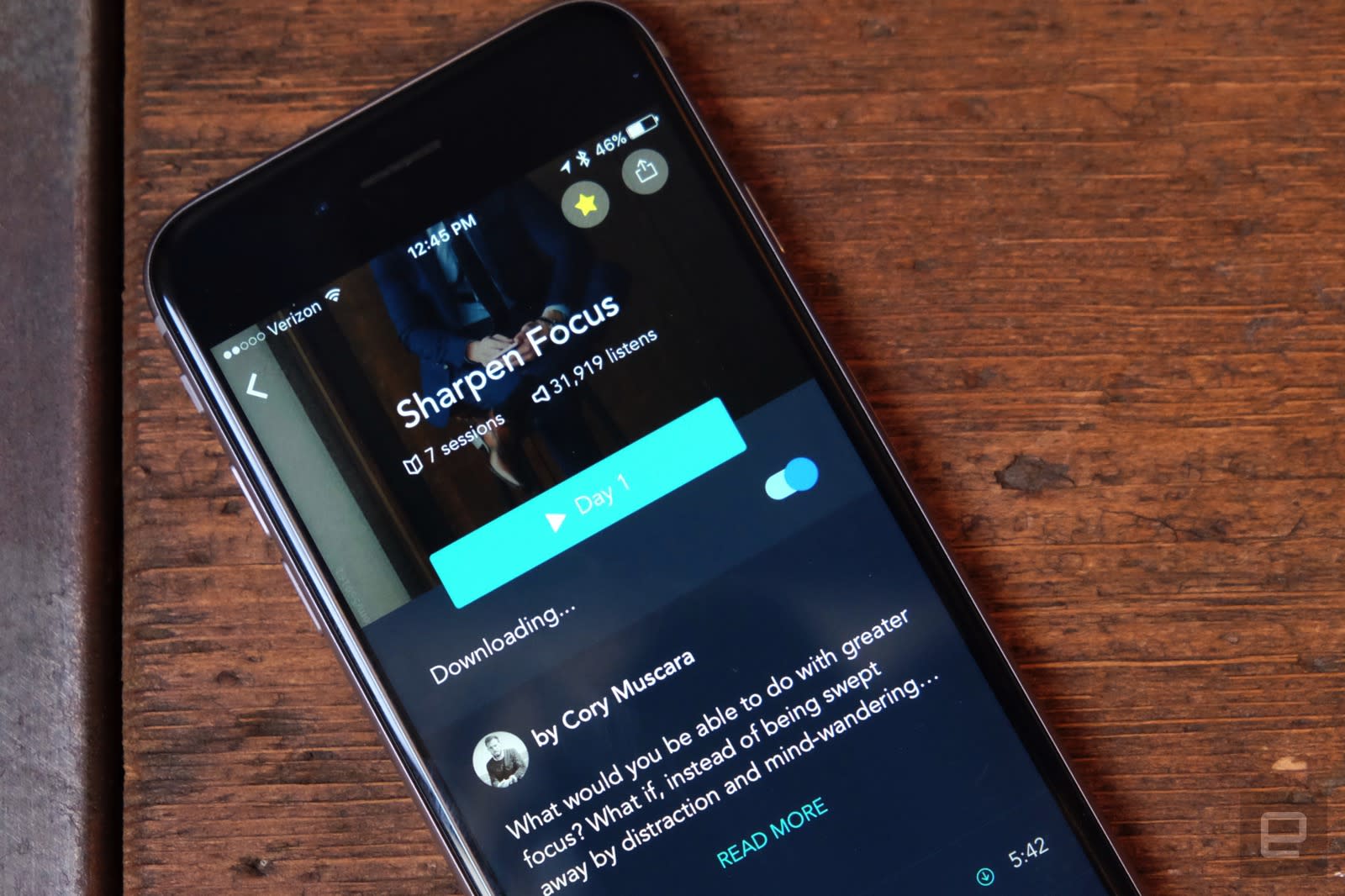 "Mindfulness" may be a bit of a buzzword -- but for many people, taking 10 or 20 minutes out of the day to clear your thoughts can be extremely valuable. And if you're not a expert, "guided" sessions (where you listen to someone who walks you through a focused meditation exercise) can be a very helpful way to get started.

The Simple Habit app for iOS and Android is one of the best guided meditation apps out there, with hundreds of sessions organized by what you want to accomplish, how much time you have or how you're feeling. Today, Simple Habit 3.0 is launching with a host of new features that solidify its status as a go-to app for anyone who wants a little more peace of mind.

The most notable feature is probably an offline mode -- you can now download any meditation exercise to your phone so it can be played back when you don't have an internet connection. Simple Habit says that this was one of the three most requested features from its users, who said they often find themselves wanting to meditate while on a flight or subway ride where there's no internet. Many of Simple Habit's meditations are organized into "sessions" that last a week or longer, building on what you meditated on the day before. The offline feature is smart enough to download an entire series all at once so you're not left high and dry when you're ready to move on to the next day.

Another new user-requested feature is an improved search experience. Simple Habit says it now has more than 1,000 different topics, so the new search lets people browse by the different situations or moods they're in as well as look for specific topics. Simple Habit also includes a filter in your search so you can find sessions that last around 5 minutes, 10 minutes or more than 10 minutes.

There's also a new "recommended" section to help users dig through the many meditation sessions in the app. I haven't used the app too much yet, so the sessions being recommended to me for starters are pretty basic introductory material, but Simple Habit says those recommendations will change and become more tailored as you listen and work your way through the app.

The last few features are pretty simple additions that nonetheless make the app feel a bit more feature-complete. You can set up a custom notification to remind you to meditate every day. That's the kind of feature we'd expect to have seen on day one, but regardless it's something that can help new users build their meditation habits. Simple Habit also includes the option to add the reminder directly to your calendar, and a new widget for the "today" screen for iOS surfaces the next meditation exercise in whatever series you've been working your way through.

Users can also build a custom meditation playlist. It works more like a "save for later" feature that adds groups of meditation exercises to a part of your profile for you to easily access later. While it doesn't work like a "traditional" playlist, most users aren't going to want to run through multiple sessions in a row like you do when listening to music or podcasts. Being able to save sessions for later as you browse the app will definitely make it easier to find them later when you're ready for something new.

Simple Habit has a free tier with "more than 50" sessions, and all of these new features will be available whether or not you pay for the app -- except for one. Downloading sessions for offline listening is only available to premium paid subscribers -- a subscription costs $12 a month or $100 per year. For that, you'll also unlock the full library of Simple Habit meditation sessions. That's not cheap, but Simple Habit is definitely a best-in-class app. And if you want to give it a shot, Simple Habit is offering a free week of the premium service for new users right now. The updated app is available now in the App Store and on Google Play.

In this article: gear, guidedmeditation, meditation, meditationapp, mindfulness, services, simplehabit
All products recommended by Engadget are selected by our editorial team, independent of our parent company. Some of our stories include affiliate links. If you buy something through one of these links, we may earn an affiliate commission.