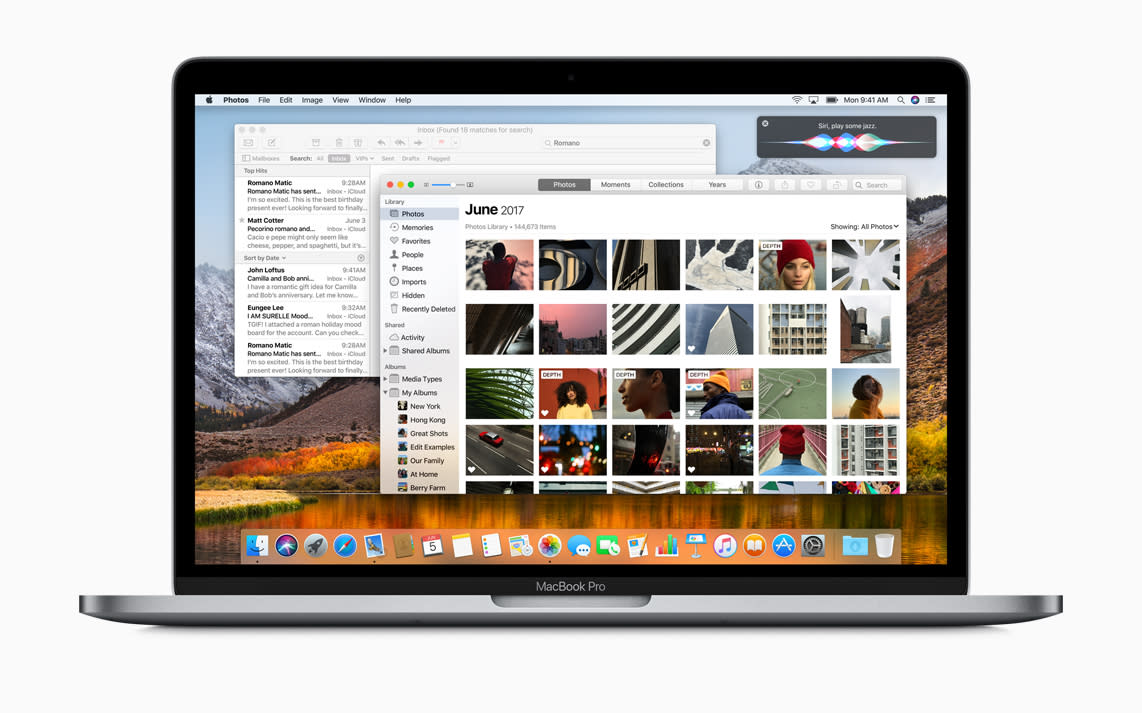 Another WWDC, another update to macOS, the software powering Apple's traditional desktop and laptop computers. As usual, senior VP of software engineering Craig Federighi is onstage at the company's annual Worldwide Developers Conference, this time detailing the latest features that Apple will bring to macOS High Sierra when it launches later this year. (We swear that's the real name.) The first update is for Safari, with Federighi claiming that Safari tops all desktop browsers in speed: He even went as far as to say it's the world's fastest desktop browser. A Modern Javascript test claims the new Safari is 80 percent faster than Chrome. The browser also features autoplay blocking: It detects sites that shouldn't be playing video and pauses them.

Safari also will deal with the various trackers that follow us around the internet with a feature called Intelligent Tracking Prevention. It uses machine learning to look for cross-site trackers and "segregates" them so that they can't keep tracking you. Anyone who is concerned with their privacy will likely want to check this out.

Photos got a big update last year, but Apple's dropping more improvements in High Sierra. There's now a persistent sidebar (like iPhoto had for years before Apple took it away), and when you set up People to group various people you photograph, it'll sync from your desktop to other devices. Perhaps the biggest deal is that you can pop a photo out from the Photos app into a more robust editor like Photoshop and then sync the changes right back to your Photos library. Naturally, Mail is getting a few updates as well. Spotlight search results have been improved, with some "top hits" showing up. There's also a split-view compose window that keeps the message you're replying to on one side and your new mail on the other. Last, Mail is more efficient, with your mail library size set to shrink about 35 percent.

There are a bunch of under-the-hood improvements in macOS Sierra as well. Most notably, Apple is now using its own Apple File System, a move that should do a lot to speed things up in the file system. It's not the kind of feature that Federighi can demo onstage, but he did show how much a few common actions would speed up. He also announced that Apple was moving to the H.265 video standard, from H.264.

Apple is also pushing out a new update to its Metal graphics suite that provides developer access to the GPU. There's a lot to unpack here, but Metal 2 is well suited to machine learning and external graphics; Apple is even offering a Thunderbolt 3 external graphics kit. Apple even started talking about VR: Metal for VR will enable developers to start building VR experiences and use the HTC Vive with the Mac for the first time.

Federighi absolutely raced through his rundown today of the macOS updates, but it feels to some extent like an update that is all about refinement rather than major new consumer-facing features. That said, this isn't the only update for Mac fans today: Apple has also already announced a major update to the iMac line, and it feels like more hardware may be coming soon.

Apple said that High Sierra would run on every Mac that is able to run macOS Sierra, and it'll be out this fall, when mac updates usually arrive.

Last year's update, macOS Sierra, continued the trend of Apple bringing a number of tools from iOS over to the Mac. Most notable was Siri appearing on your desktop, but other useful features included a universal copy and paste between iOS and the Mac, storage optimization using iCloud, Apple Pay in Safari, and big redesigns to Photos, Apple Music and Messages.

In this article: apple, applenews, gear, highsierra, iOS, macOS, macoshighsierra, personal computing, personalcomputing, wwdc2017
All products recommended by Engadget are selected by our editorial team, independent of our parent company. Some of our stories include affiliate links. If you buy something through one of these links, we may earn an affiliate commission.