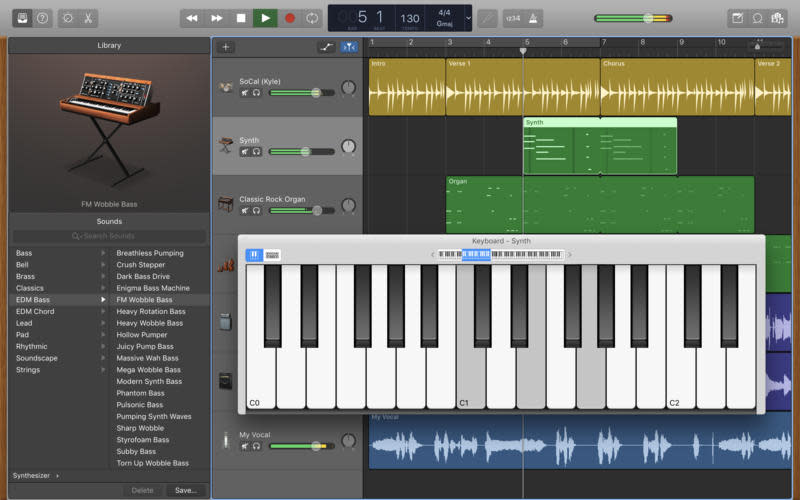 While the list of apps supporting the MacBook Pro's Touch Bar has been growing at a decent clip, and Apple's own entry-level music learning and production software just got an update as well. After WWDC, Apple pushed out a GarageBand update that expanded how the app works with the MacBook Pro's Touch Bar -- similar to Apple's own professional level production suite, Logic Pro X, which added touch features earlier this year.

With the 10.2 update, users can now easily navigate through GarageBand projects, adjust levels and play instruments from the MacBook Pro's dynamic function row. For everyone else diving back in to GarageBand, you'll find the latest update also brings a "modern design with improved ease of use" and the ability to add track you started on the mobile versions of the app. There are also some new drum loop controls and a trio of new virtual drummers that can play Pop, "Songwriter" or Latin styles.

Touch Bar features aside, the latest update for GarageBand is a welcome one. GarageBand gets updates on a year-ish basis, but this is one of the biggest updates we've seen since GarageBand 10 arrived way back in 2013. It's also reassuring to see that Apple hasn't forgotten to update it's entry level software with some of those pro-level features.

In this article: apple, applenews, av, garageband, gear, macbookpro, personal computing, personalcomputing, touchbar
All products recommended by Engadget are selected by our editorial team, independent of our parent company. Some of our stories include affiliate links. If you buy something through one of these links, we may earn an affiliate commission.