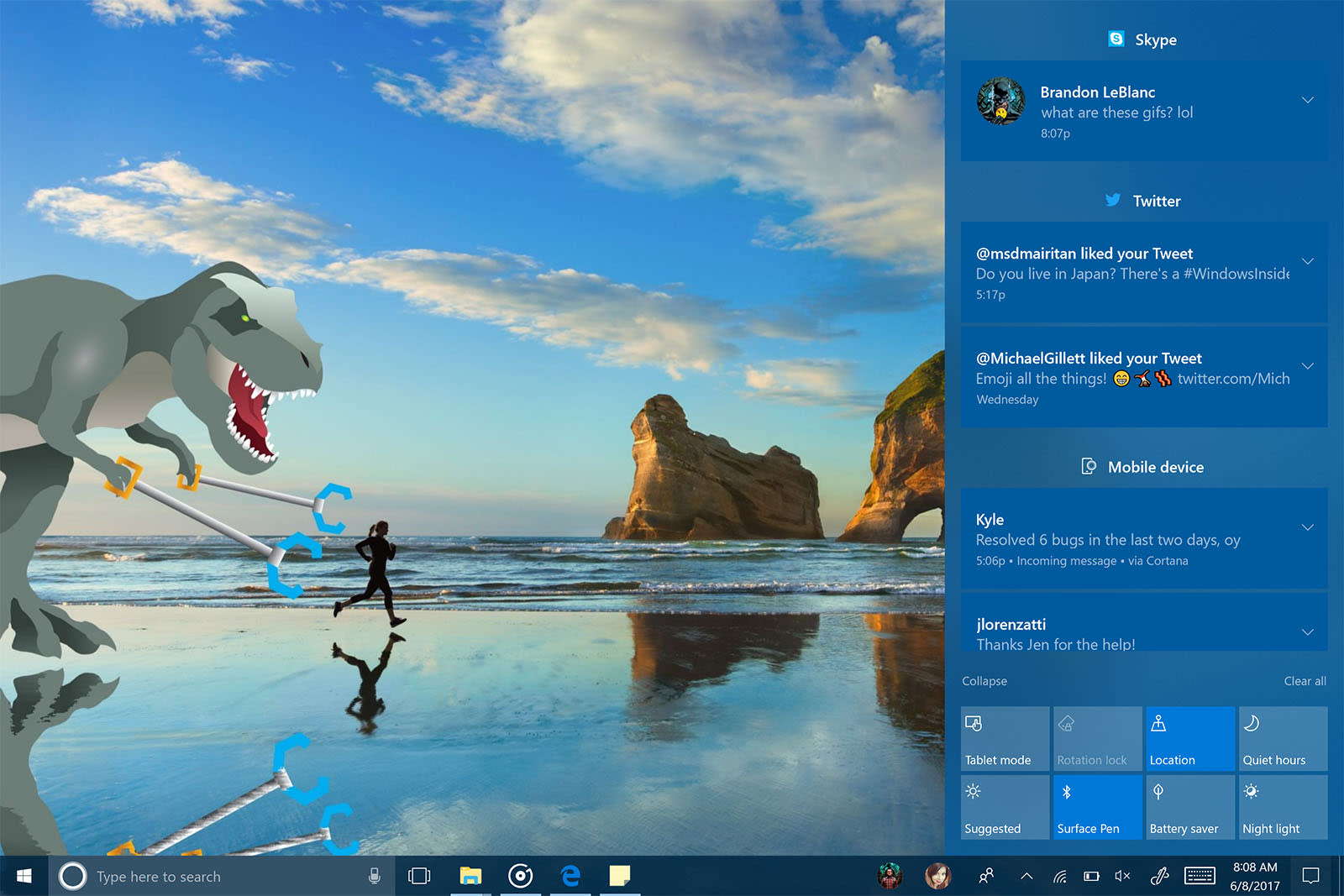 Microsoft promised big changes to Windows 10 with the Fall Creators Update, and it's backing that up in spades with a new Insider Preview. Available to brave testers on the "Fast Ring," the release brings redesigned notifications in the Action Center, much improved handwriting and stylus support, upgrades to Cortana and the Edge browser, improved HDR support and more. The release may be Microsoft's biggest Insider Preview yet, judging by the massive post explaining all the new features.

The changes begin right from the start menu, which now features the so-called "acrylic" transparent design and easier resizing as part of Microsoft's new Fluent Design System. That carries through to the Action Center (above), which also gets the Acrylic treatment and easier customization options. On the taskbar, you can pin Microsoft Edge sites, making it easier to access Amazon, Reddit and other sites, assuming you're not a Chrome or Firefox user. Edge also gets a true full-screen mode via a simpler F11 toggle.

Cortana, Microsoft's able voice assistant, has suddenly become better at handwriting, too. You can use any active pen, including the Surface model, to lasso onscreen information and trigger Cortana. "Find a website with upcoming event info, or an event poster someone shared in social media," Microsoft writes. Handwriting is getting more support beyond Cortana, with new features in the handwriting panel that convert your scrawls to text on the fly, while shifting it when you lift the pen so you can keep writing. You can also select text to edit it, make corrections by overwriting the incorrect text, use ink gestures like strikethough, join and split to fix text, and input emojis via pen. Finally, there's pen scrolling and a new "where's my pen" option (above) in case you can't remember where you put it down last.

Microsoft has improved input in other areas, by adding emojis to any keyboard via Windows key shortcuts, while introducing a new XAML touch keyboard that work betters when Windows 10 is in tablet mode. ePub books get notes and annotations, and local media detection is improved for apps like Photos, Groove and Movies & TV, too. Finally, there's a new "HDR and Advanced Color Settings" page that'll make it easier to set up your display, should you be so lucky to have one that supports HDR.

There are numerous other changes that you can see here. Insiders on the Fast Ring should see the new 16215 Insider Preview release now (also dubbed #TacoHat), and for more info, Microsoft plans to do a Windows Insider webcast on its Mixer channel every month.

In this article: ActionCenter, applenews, Cortana, Edge, FallUpdate, gear, Handwriting, insiderpreview, microsoft, personal computing, personalcomputing, TacoHat, Windows10
All products recommended by Engadget are selected by our editorial team, independent of our parent company. Some of our stories include affiliate links. If you buy something through one of these links, we may earn an affiliate commission.