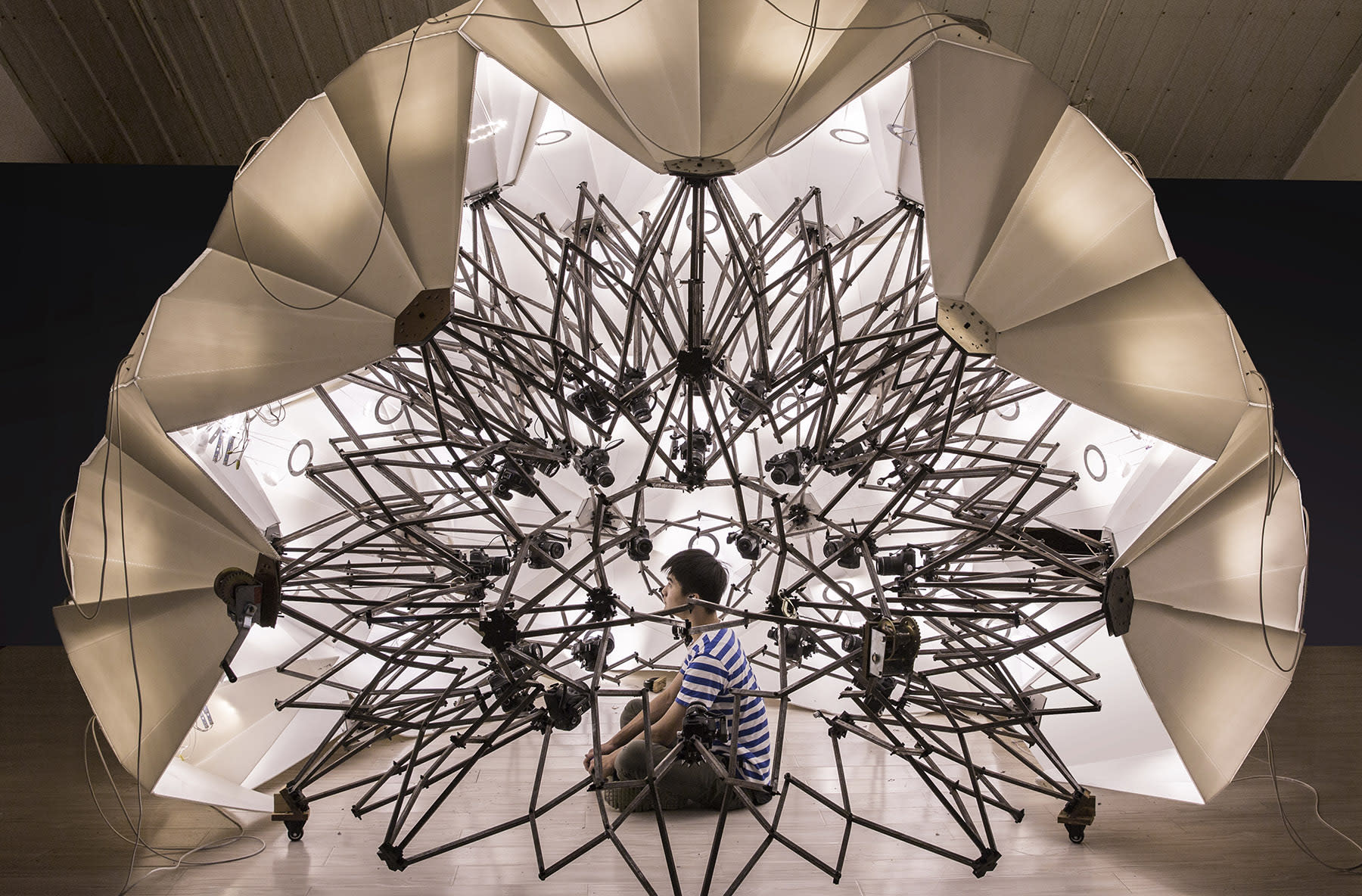 Copying yourself digitally is not easy. Ideally, you want multiple photos taken from every angle at the same moment with all-around, soft illumination. A company called People's Industrial Design Office in Beijing, China has created something called the 3D Copypod that can do all that for you in one neat package. It's based on the "Hoberman sphere," a type of geodesic dome that can fold down to a much smaller size thanks to its scissor-like joints.

"Objects are surrounded by a spherical array of over one hundred fixed focal length DSLR cameras," the architectural and design firm explains. "With minimal adjustment, the 3D Copypod can contract to scan small objects and expand large enough to scan a group of people." Furthermore, the folding panels are lit from the inside "to ensure a shadowless photography environment."

The 3D Copypod allows users to construct digital models using the photo data, which can be used to make high resolution 3D prints, the company says. People's Industrial didn't specify what kind of software it used to stitch the photos and convert them to a model, but given the number of cameras, it should be able to produce very accurate and high-res results.

The Hoberman sphere is a pretty ingenious take on the geodesic dome. It's built from six interlocking hoops (called "great circles") with numerous hinged scissor joints, and can be opened by spreading the joints apart, much like a folding chair. One model, at the AHHAA Center in Tartu, Estonia, is built from aluminum, weighs 750 pounds and can expand up to 19 feet via a motorized system (check out the video of it in action here.)

The People's Industrial Design Office turned the concept into a nifty circular lightbox by attaching cameras to the interior and translucent panels on the outside. The stunning design resembles some kind of alien igloo on the exterior, with a fascinatingly complex skeleton on the inside. That allows the cameras to move apart uniformly if you have a larger mise en scene. "With the snap of a camera, even subjects in motion can be captured in high quality and full color," the team says.

In this article: Architecture, cameras, CopyPod, CopyPod3D, DigitalModels, DLSR, gear, Lighting, TheBigPicture, thenewbigpicture, wearables
All products recommended by Engadget are selected by our editorial team, independent of our parent company. Some of our stories include affiliate links. If you buy something through one of these links, we may earn an affiliate commission.