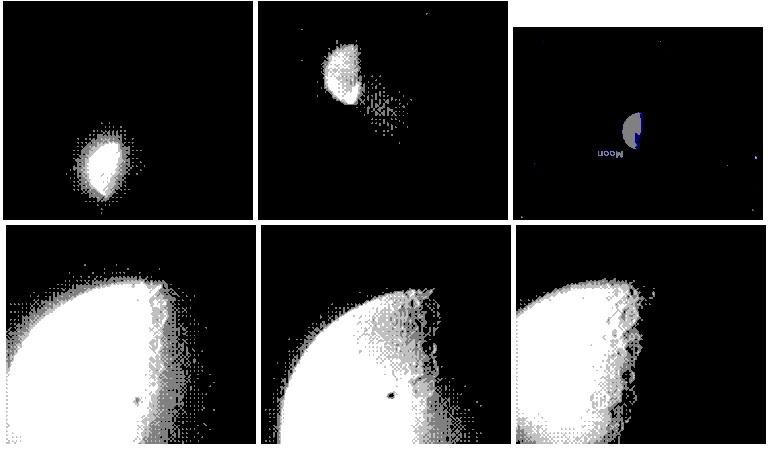 The Game Boy Camera, released in 1998, wasn't even close to the weirdest peripheral for Nintendo's classic handheld console and even earned a Guinness World Record for the smallest digital camera in the world. Its 2-bit, 128 x 128 pixel CMOS sensor managed very grainy black-and-white shots, making it far more fun than technically impressive. And yet, a Dutch researcher and tinkerer just used one to catch some charmingly blocky photos of the moon and Jupiter.

Astrogphrapher Alexander Pietrow used a universal cell phone mount to strap one of the 19-year-old monochrome workhorses to an appropriately old telescope (built in 1838) in Leiden University's Old Observatory and aimed at at the stellar bodies. The resulting photos are barely detailed -- Jupiter is half a dozen pixels wide -- but they're blocky in a charming throwback to the original Game Boy's 8-bit graphical style. Pietrow even managed to pick out three of the gas giant's moons, singular pixels in a field of star dots. (Note that the image below has been blown up 400 percent to make it visible, since the Game Boy Camera takes photos at a whopping 112 x 128 pixel resolution.) Maybe it doesn't do much for astronomy as a field, but it's a lovely reminder that space still fascinates at any resolution -- that we still find meaning when stretching for the cosmos with the crudest of tools.

In this article: gadgetry, gadgets, gameboy, gameboycamera, gaming, space, telescope
All products recommended by Engadget are selected by our editorial team, independent of our parent company. Some of our stories include affiliate links. If you buy something through one of these links, we may earn an affiliate commission.