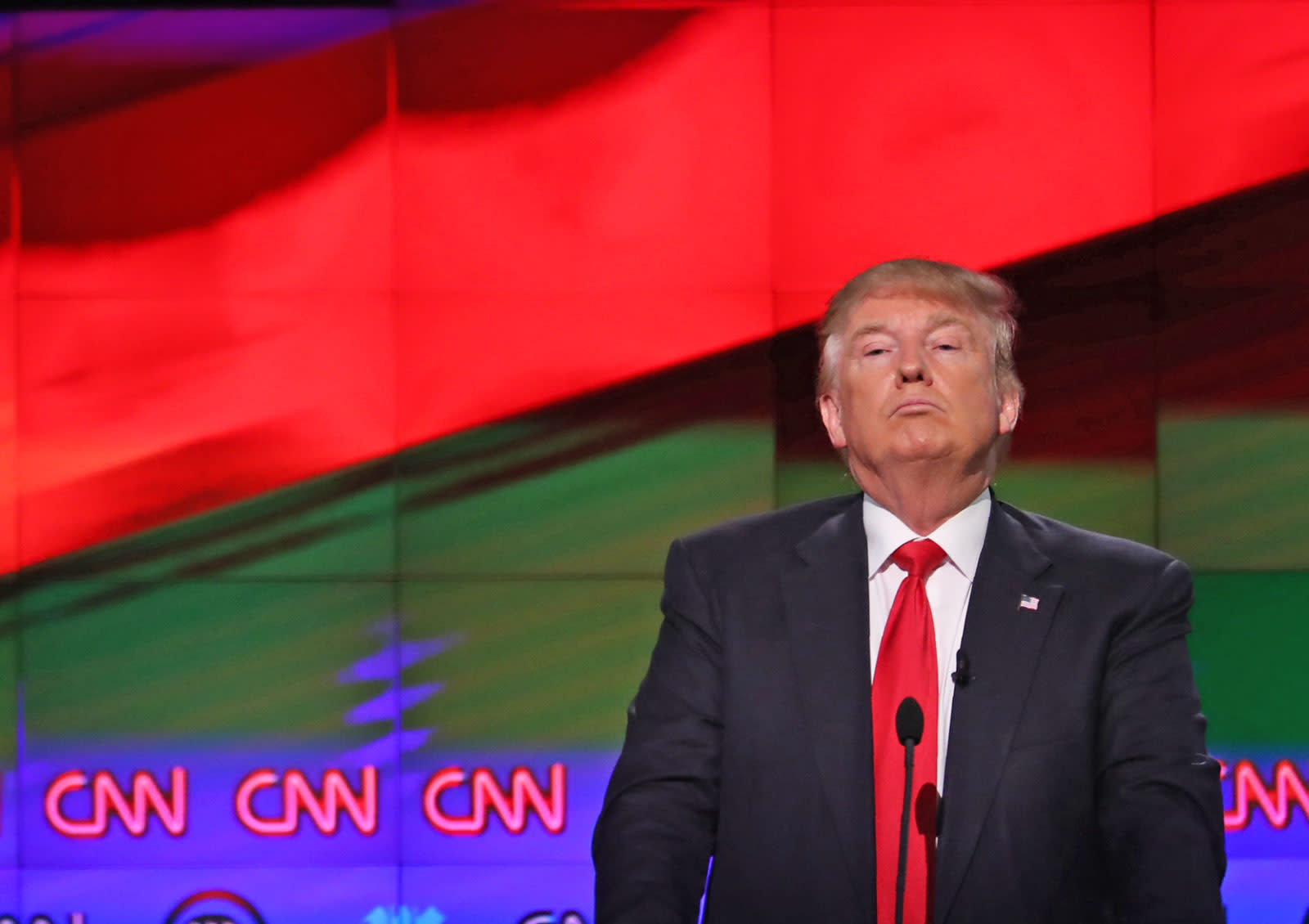 With the addition of three sentences, CNN turned a relevant news story into an utter mess. This week the organization uncovered the identity of HanAssholeSolo, the Reddit user who created the GIF tweeted round the world: Donald Trump beating up a man with the CNN logo plastered over his head. Media outlets also discovered HanAssholeSolo's history of publishing anti-Semitic and racist messages on Reddit, and he deleted his account after sharing a lengthy apology.

Here's where CNN messed up: In an effort to appear transparent, the network said it would not publish HanAssholeSolo's name, as he had "shown remorse" and promised not to post bigoted messages in the future. This segment concluded, "CNN reserves the right to publish his identity should any of that change."

CNN was immediately accused of blackmailing the Redditor, while some outlets -- mainly far-right ones -- took things a step further, claiming the news organization was actually doxing him.

This is not true. CNN is not doxing anyone.

But, to better understand why CNN's tactics were simply ominous and self-destructive, rather than potentially illegal, it's crucial to answer the following question: What is doxing?

This is going to take more than one line. Doxing is all about control. In a doxing attempt, attackers hunt down and publish personal information about someone with the intent to cause harm, sharing items including addresses, phone numbers, places of employment, sexual orientation, age, social media accounts and even family members' information. Generally, there's an appeal to dig up even more sensitive information and further harass the victim -- calling dozens of times a day, sending items to their address or actually showing up at their home.

At its heart, doxing is an intimidation tactic meant to scare and silence someone -- generally, someone the attacker disagrees with online.

Doxing was one of the main weapons deployed by proponents of Gamergate, a loosely organized movement that led to the widespread harassment of women in the video game community around 2014. Gamergate targeted game developers Zoe Quinn and Brianna Wu and Feminist Frequency founder Anita Sarkeesian, among others.

The FBI got involved, and earlier this year the Bureau released a redacted 173-page document outlining its Gamergate investigation, including swaths of abusive tweets, emails and messages. One suspect apparently admitted to calling and threatening a victim 40 to 50 times a day, though it appears this person didn't face any punishment. The entire investigation was closed in September 2015.

Felicia Day, actress and all-around nerd goddess, penned a blog post in October 2014 about her personal reaction to Gamergate and to explain why she hadn't spoken up about the controversy before then. Essentially, she wrote, she was scared of being doxed:

I have been terrified of inviting a deluge of abusive and condescending tweets into my timeline. I did one simple @ reply to one of the main victims several weeks back, and got a flood of things I simply couldn't stand to read directed at me. I had to log offline for a few days until it went away. I have tried to retweet a few of the articles I've seen dissecting the issue in support, but personally I am terrified to be doxxed for even typing the words "Gamer Gate." I have had stalkers and restraining orders issued in the past, I have had people show up on my doorstep when my personal information was HARD to get. To have my location revealed to the world would give a entry point for a few mentally ill people who have fixated on me, and allow them to show up and make good on the kind of threats I've received that make me paranoid to walk around a convention alone. I haven't been able to stomach the risk of being afraid to get out of my car in my own driveway because I've expressed an opinion that someone on the internet didn't agree with.

Day was doxed minutes after publishing that blog post.

Doxing is a tool of silence, and it doesn't even have to be deployed to have monstrous effects. Its mere threat can close people out of conversations, pushing them away from entire communities and fandoms. Yes, even nerd goddesses.

Especially nerd goddesses. The Pew Research Center found in 2014 that men are more often the victims of name-calling, physical threats and embarrassment tactics in the digital world, while women "experience particularly severe forms of online harassment," including stalking and sexual harassment.

"Young women, those 18-24, experience certain severe types of harassment at disproportionately high levels: 26 percent of these young women have been stalked online, and 25 percent were the target of online sexual harassment," Pew writes. "In addition, they do not escape the heightened rates of physical threats and sustained harassment common to their male peers and young people in general."

Do you know why you piss me the fuck off?

Because you're lazy. You're ignorant. You are a blithering collection of wannabe Wikipedia philosophers, drunk on your own buzzwords, incapable of forming an original thought. You display a lack of knowledge stunning in its scope, a fundamental disregard of history and human nature so pronounced that makes me wonder if lead paint is a key component of your diet. You think you're making piercing arguments when, in actuality, you're throwing a temper tantrum that would embarrass a three-year-old.

And that was just the intro. However, Kluwe wasn't doxed minutes or even weeks later. Kluwe hit Twitter the following day to drive home the fact that attackers were clearly targeting women, something Gamergate proponents have long denied: "And for the record, none of you fucking #Gamergate tools tried to dox me, even after I tore you a new one. I'm not even a tough target."

Kluwe discovered plans to dox him on a public message board about a month later, though it's unclear whether the attackers were tied to Gamergate at all.

Gender not only dictates likely victims of a doxing attack; it also plays a role in how individuals view privacy threats. Women are more often the target of sexual harassment and stalking attempts online, and are therefore inundated with warnings about keeping accounts, photos and all personal information exceptionally private. Men face privacy threats and are reminded to keep their digital lives on lock, but they're generally spared the relentless, buzzing anxiety that comes with being a woman online. Violet Blue offers a real-world example of this perspective gap in her book The Smart Girl's Guide to Privacy: A man and a woman, a couple, hear Snapchat has been hacked, and users' real names and phone numbers are out in the wild. The man brushes it off, saying it's just his name and number, no big deal. The woman, however, is immediately concerned. She sees a real, increased risk of stalking or harassment.

"It isn't a story about 'right' or 'wrong' ways of thinking about privacy," Blue writes. "Their reactions just show a great example of the difference between what women and men see as risky exposure. He didn't think it was a big deal for anyone to have his number, username, and real name. She, on the other hand, said it made her worried."

Doxing can be a precursor to stalking, which is one reason it's so unsettling -- to say the least.

But doxing is terrifying enough on its own for people of any gender, stripping away layers of privacy and inviting the skeevy underbelly of the internet into the victim's life, home and bedroom. It transforms every stranger into a potential attacker, every car driving by the house into a mystery stalker, every phone call into a fountain of anxiety.

This simply isn't the case with the CNN controversy. Publishing a relevant person's name as part of a news article -- a standard journalistic practice that answers the question, "Who said what?" -- is not the same as sharing their location or contact information and instructing others to make their life hell. As for claims of blackmail, the Redditor apparently apologized and deleted his account before speaking with the news organization. But, that's a different topic altogether.

CNN certainly made a mess of things, but it definitely did not dox anyone.

Comments on this story were available for the first 24 hours after publication only, and have since been closed.

In this article: cnn, doxing, doxxing, gear, hack, internet, personal computing, personalcomputing, politics
All products recommended by Engadget are selected by our editorial team, independent of our parent company. Some of our stories include affiliate links. If you buy something through one of these links, we may earn an affiliate commission.
Share
Tweet
Share