But battery life is still a problem.

The HP Spectre X2 is, in many ways, the ideal way to counteract Microsoft's Surface lineup. It retains the slick, high-end style that we loved from the original model, while improving things a bit to make it much more user friendly. Its unique design is a way for HP to show it can make premium devices on par with the likes of Apple. But while it's a better Surface Pro competitor than before, there's still plenty of room for improvement. 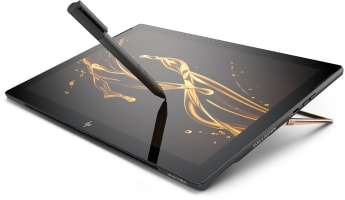 Like HP's recent Spectre laptop, the X2 is almost in love with its bold style. Its black-and-copper, all-aluminum aesthetic evokes something like a high-end wristwatch more than it does a PC. It's a wonder to behold, and it feels pretty great too, thanks to that smooth metallic case. The X2 is just as sturdy as the last model, with no sign of flexing in its body. You can feel the confidence of HP's designers at every angle.

The X2's copper kickstand accents the tablet portion of the PC — its bright, mirrored finish is particularly striking against the jet-black case. Thankfully, HP dumped the annoying kickstand quick-release button from the last model, which was endlessly frustrating. Now you can just pull out the kickstand from either side, similar to the way the Surface works. That lets you control it much more easily than before. The kickstand can also go all the way down to 165 degrees now, as with the Surface Pro — a full 15 degrees more than the last model. HP wisely chose to include the X2's keyboard cover and stylus inside the box, which gives it a leg up over Microsoft. (Surface Pro shoppers will have to purchase both accessories separately this year, tacking on at least another $230.) The X2's keyboard shares the same black-and-copper aesthetic as the tablet, and it sports an extra-wide touchpad. While it's pretty slim, it also features a layer of aluminum, which makes it more rigid than the Surface and other hybrid laptops. HP significantly improved the magnetic connection between the keyboard and stylus too — we had no problem holding up the entire system by the keyboard alone.

The X2's stylus offers 1,024 levels of pressure sensitivity, and there's a convenient holster for it right alongside the keyboard. That's not as slick as the Surface's ability to magnetically pin its stylus next to the screen, but it's far more secure, so you won't end up losing the X2's pen in your bag. On its own, the X2's tablet weighs in at 1.68 pounds. With the keyboard, the whole package jumps to 2.5 pounds, just a tad more than a fully equipped Surface Pro. While the slate portion is a bit heavy compared with the iPad, it's fine for browsing the web or reading the occasional digital comic. Altogether, it's portable enough that you might not even notice it in a backpack or messenger bag, which is what I want from every ultraportable.

Among other small changes, HP moved the X2's speakers from the sides to the front. They sound decent for a laptop, but they certainly won't replace a decent pair of external ones or headphones. There's a 13-megapixel camera on the rear of the tablet, along with a 5-megapixel front-facing camera with Windows Hello infrared capabilities (for logging in with your face).

As for ports, the X2 features two USB 3.1 Type-C connections (which can handle both external displays and charging), a microSD slot and a headphone jack. HP also includes a USB-C-to-USB-A dongle in the box, for connecting your older gear. While it might be annoying to carry that around, it's nice to see HP make the transition to USB-C, especially when Microsoft is still refusing to adopt it on the Surface lineup. The Spectre X2's screen is also a significant leap over that of its 1080p predecessor. The 12.3-inch display packs in a 3,000 x 2,000–pixel resolution, amounting to 293 pixels per inch. Basically, that means you won't notice any fuzziness around text and images, even if you really try. The Surface Pro, in comparison, sports a 2,736 x 1,824 resolution. You likely won't notice the difference between them, but they'd both count as "Retina" displays, in Apple's parlance.

Quality-wise, the X2's display looks good when viewing photos, text and movies. Personally, I still prefer the way colors pop on the Surface Pro's Pixelsense screen, but most consumers will be satisfied with what HP is offering. The X2's display is also bright enough to use in direct sunlight, although you'll have to deal with plenty of reflections, thanks to its glass screen.

HP shaved off a bit of the bezel around the screen, which allowed it to fit in a slightly bigger display. Another useful change: It now features a 3:2 aspect ratio, which makes it a bit taller than the previous model's widescreen. That makes the X2 better suited for viewing webpages and working on documents, but in exchange you'll have to live with black bars when watching movies. The best thing about the Spectre X2 is its keyboard. It's simply great to type on. There's a surprising amount of travel for such a slim machine, and it offers a satisfying amount of responsiveness (unlike the mushy keys on the ASUS Zenbook 3). We also praised it in the last model, so there wasn't much for HP to change. Still, it's nice to see thin hybrid laptops packing in keyboards that are better than the ones on some full-size notebooks.

Thanks to its sturdy design, the X2 also felt great to use in my lap. It'll take you a while to find a comfortable kickstand position, but it's possible. I had no trouble typing out most of this review with the computer balanced on my lap -- even on an uncomfortable park bench.

Unfortunately, the X2's touchpad is a lot more finicky. While it's usually smooth, it sometimes requires multiple clicks and swipes to get it to do what you want. And if your fingers have a little bit of sweat or grease on them, it gets even worse. This is something we complained about with the last model, and it's unfortunate that HP hasn't made much progress here. As for the X2's stylus, it's ... fine. It's not nearly as full-featured as Microsoft's Surface Pen, and it doesn't mimic the feeling of putting pen to paper as well. But it was adequate for some quick note taking and doodling. If you're a serious artist, you'll definitely want to invest in something better.

Thanks to Intel's seventh-generation Core processors, the Spectre X2 feels just as speedy as any other modern ultraportable. It's no longer stuck with the weak, low-powered chips from a few years ago. The X2 had no trouble keeping up with my workflow, which involves having dozens of browser tabs open, along with Photoshop, Slack, Spotify and a plethora of other apps. Naturally, it's not much of a gaming machine, but it'll run things like Minecraft just fine.

Unfortunately, HP didn't make any significant leaps when it comes to battery life. The X2 lasted for 7 hours and 45 minutes in our testing, just an hour longer than last year's model. That's an improvement, but it can't hold a candle to the Surface Pro, which clocked in at 13 hours and 40 minutes. These days, it's just a bit hard to stomach an ultraportable that can't even reach 10 hours of battery life. The Spectre X2 starts at $1,150 with a seventh-generation Core i5 processor, 8GB of RAM and a 128GB SSD. And don't forget, that includes a keyboard and stylus. You can also spec out the X2 all the way up to a Core i7 processor, 16GB of RAM and 1TB SSD for $1,970. The Surface Pro, meanwhile, starts at $799 for an underpowered model, and those accessories will cost you even more. If you want a Surface Pro on par with the X2, you'd have to shell out for the $1,299 model. HP isn't trying as hard to undercut Microsoft's pricing this year, but it's still offering a decent value.

If you're looking for a hybrid laptop, you've got more options than just HP and Microsoft. There's the Thinkpad X1 Tablet, which offers more of a business spin, as well as notebooks with flippable screens, like Dell's XPS 13 2-in-1. Really, though, if you're chasing the dream of having a tablet that works as a tablet, the Surface Pro is currently your best bet, despite the higher cost. And if you don't mind having less battery life, you'll likely be able to find some good deals on the Surface Pro 4 as well. Overall, the new Spectre X2 brings along some much-needed improvements, but a few issues hold it back from being a must-have. HP seriously has to do something about its battery life, especially now that Microsoft offers twice as much with the Surface Pro. And the touchpad problems, which we've criticized with the last model, are simply inexcusable. HP has proven it can build showstopping, stylish machines. Now it needs to make sure they're as easy to use as the competition.