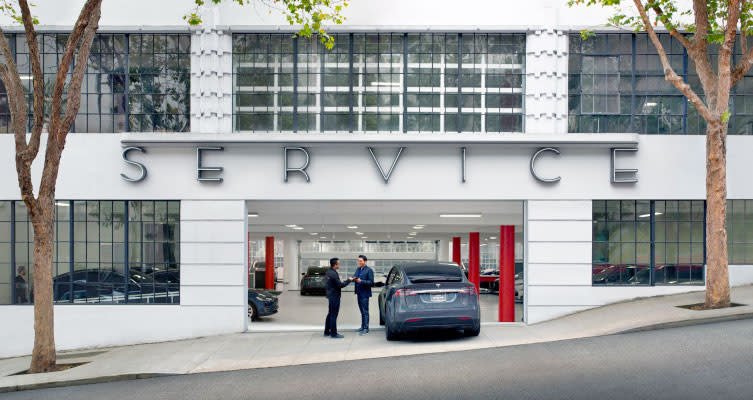 Tesla just completed its first batch of Model 3s and 30 cars are scheduled to be in their owners' hands on the 28th. But with an estimated 400,000 orders waiting to be filled, Tesla's production ramp up is going to put many more Model 3s on the road in the very near future. In preparation for those added vehicles and the demand they're sure to put on Tesla service centers, the company is working to expand its service facilities.

According to Tesla, it will be adding 100 new service centers, hiring 1400 more service technicians and tripling its service capacity worldwide. Remote diagnostic capabilities allow around 90 percent of potential car troubles to be identified outside of a service center and to address offsite issues, Tesla is adding over 350 service vans to its mobile fleet. The vans can tackle a number of repair issues and do so wherever the car may be, but if a vehicle needs to go into a service center, owners can schedule an appointment from their car. Tesla claims that it has optimized repair flow so that its shops work four times faster and in three times less space than regular repair facilities.

While more Tesla service centers will be useful and likely in demand, expanding Tesla repairwork to independent automotive shops would be a better move. In January, there were reports that Tesla was working on making repair information and spare parts available to Tesla owners, currently only available to those living in Massachusetts, which passed a right to repair law in 2012. However, that law is set to become a national standard by 2018 after a number of automotive groups, like the Alliance of Automobile Manufacturers and the Association of Global Automakers, struck a deal in 2014 with independent garages and retailers to make it so.

Unfortunately, the agreement isn't a law and can't actually be enforced, but if Tesla wants to become more mainstream, as its Model 3 would suggest it does, it would behoove the company to let others repair its vehicles.

In this article: gear, Model3, repairability, righttorepair, services, tesla, transportation
All products recommended by Engadget are selected by our editorial team, independent of our parent company. Some of our stories include affiliate links. If you buy something through one of these links, we may earn an affiliate commission.