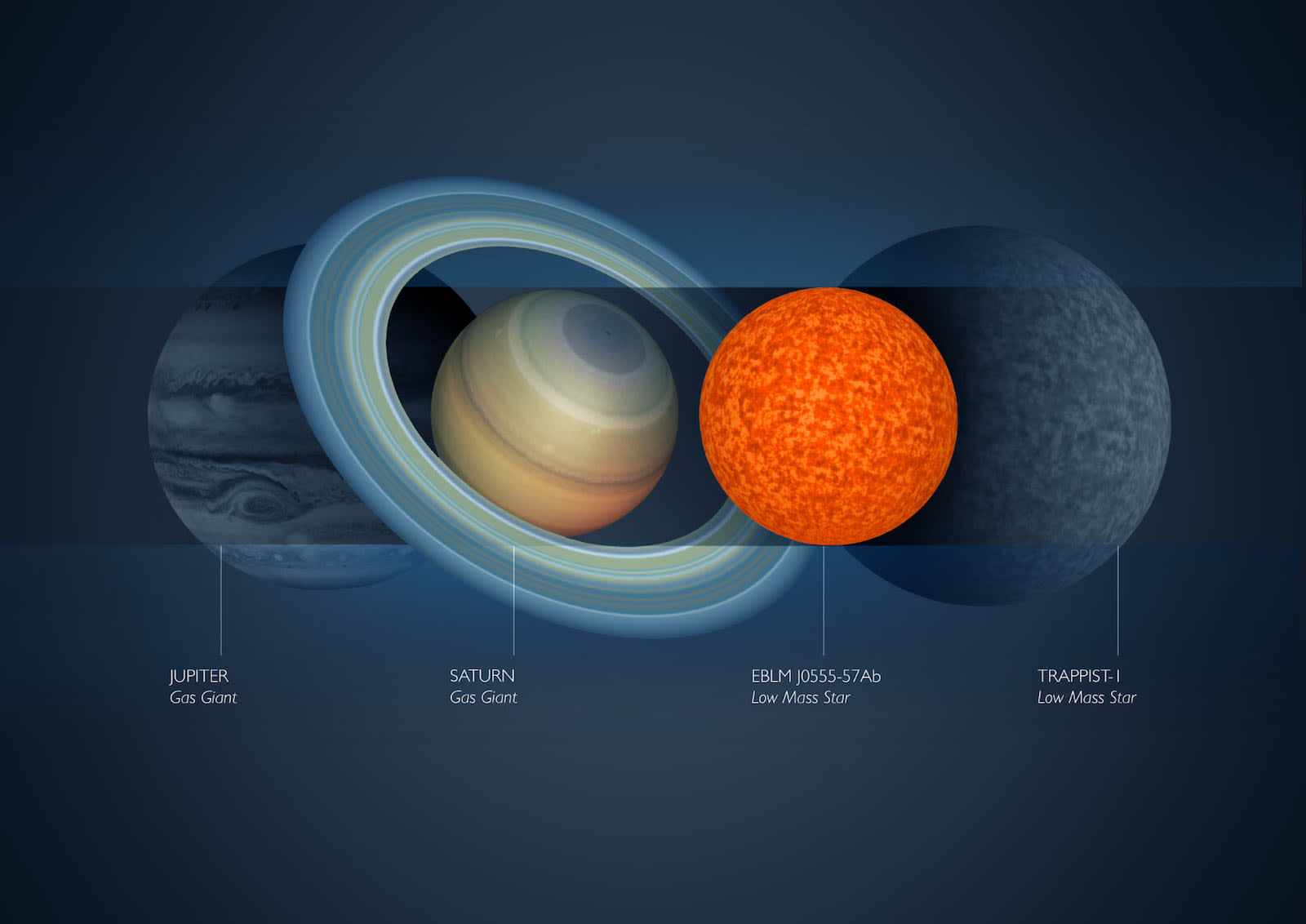 Researchers at the University of Cambridge have found the smallest star ever discovered. It's just slightly bigger than Saturn and while its mass is similar to that of TRAPPIST-1 -- which NASA recently found seven Earth-sized planets rotating around -- its radius is 30 percent smaller.

The star, known as EBLM J0555-57Ab, is around 600 light years from Earth and it orbits another larger star every 7.8 days. Researchers with the Wide Angle Search for Planets experiment detected the tiny star as it passed in front of its more sizable neighbor and used Euler and TRAPPIST telescopes for further examination. "Thankfully, we can find these small stars with planet-hunting equipment, when they orbit a larger host star in a binary system," Alexander Boetticher, a researcher on the project and a Master's student at Cambridge's Cavendish Laboratory and Institute of Astronomy, said in a statement, "It might sound incredible, but finding a star can at times be harder than finding a planet."

It has enough mass to sustain hydrogen fusion, but just barely, preventing it from being classified as a sub-stellar object. "Our discovery reveals how small stars can be," said Boetticher, "Had this star formed with only a slightly lower mass, the fusion reaction of hydrogen in its core could not be sustained, and the star would instead have transformed into a brown dwarf."

Stars this small are hard to detect and since we've found so few, we don't understand them very well yet. But they're also likely to host Earth-like planets, so spotting them and learning about them is an important task. "The smallest stars provide optimal conditions for the discovery of Earth-like planets, and for the remote exploration of their atmospheres," said Amaury Triaud, another researcher on the project, "However, before we can study planets, we absolutely need to understand their star; this is fundamental."

The findings were recently published in Astronomy & Astrophysics.

In this article: astronomy, exoplanet, gear, nasa, research, saturn, space, telescope, trappist1, UniversityOfCambridge
All products recommended by Engadget are selected by our editorial team, independent of our parent company. Some of our stories include affiliate links. If you buy something through one of these links, we may earn an affiliate commission.