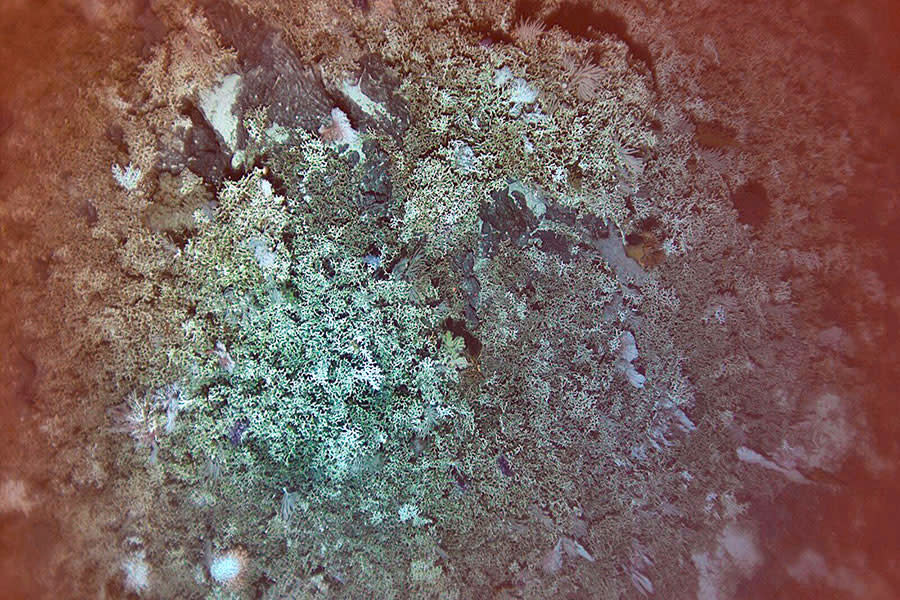 While the waters of the North Atlantic and South Pacific tend to have what hard corals need to survive, the North Pacific doesn't, and it has been thought that deep-sea coral reefs were a near impossibility in that part of the ocean. But researchers at Florida State University and Texas A&M University have discovered a few reefs in the North Pacific that don't seem to be following the rules. Their findings were recently published in Scientific Reports.

One factor that prevents reef formation is the aragonite saturation horizon, which refers to the ocean depth where levels of the mineral aragonite drop off. Hard corals need aragonite to form their skeletons, so when there isn't a lot of it around, coral reefs tend not to form. Additionally, coral skeletons are more prone to dissolve in the North Pacific compared to other areas. "Even if the corals could overcome low aragonite saturation and build up robust skeletons, there are areas on the reefs that are just exposed skeleton, and those should be dissolving," Amy Baco-Taylor, an author of the study, said in a statement, "Even if the species could survive in the area, we shouldn't be finding an accumulation of reef."

But they did find reef accumulation, six of them in fact, near the Northwestern Hawaiian Islands and Emperor Seamount Chain despite everything we know about coral reefs saying they shouldn't exist. Most of them exist below the aragonite saturation horizon and in areas with high dissolving rates.

The researchers found a couple of factors that might contribute to the reef formation. For one, the aragonite saturation horizon does get deeper along the Northwestern Hawaiian Islands, but the depth of the discovered reefs doesn't seem to follow the aragonite levels, suggesting that's not the main contributor to the growth. They also measured higher levels of chlorophyll -- meaning more food and, therefore, more energy to help overcome low aragonite levels -- and ocean currents that might boost reef formation. But those don't fully explain the reefs' existence. "Neither the chlorophyll nor the currents explain the unusual depth distributions of the reefs, why they actually get shallower moving to the northwest along the seamounts. There's still a mystery as to why these reefs are here," said Baco-Taylor.

Overall, how these reefs were able to form and survive isn't yet understood, but figuring it out will be important in light of ongoing climate change-induced reef loss. "If more of these reefs are there, that would run counter to what ocean acidification and carbonate chemistry dictates," said Baco-Taylor, "It leaves us with some big questions: Is there something that we're not understanding? How is this possible?"

In this article: ClimateChange, CoralReef, FloridaStateUniversity, gear, green, research, science, TexasAm
All products recommended by Engadget are selected by our editorial team, independent of our parent company. Some of our stories include affiliate links. If you buy something through one of these links, we may earn an affiliate commission.