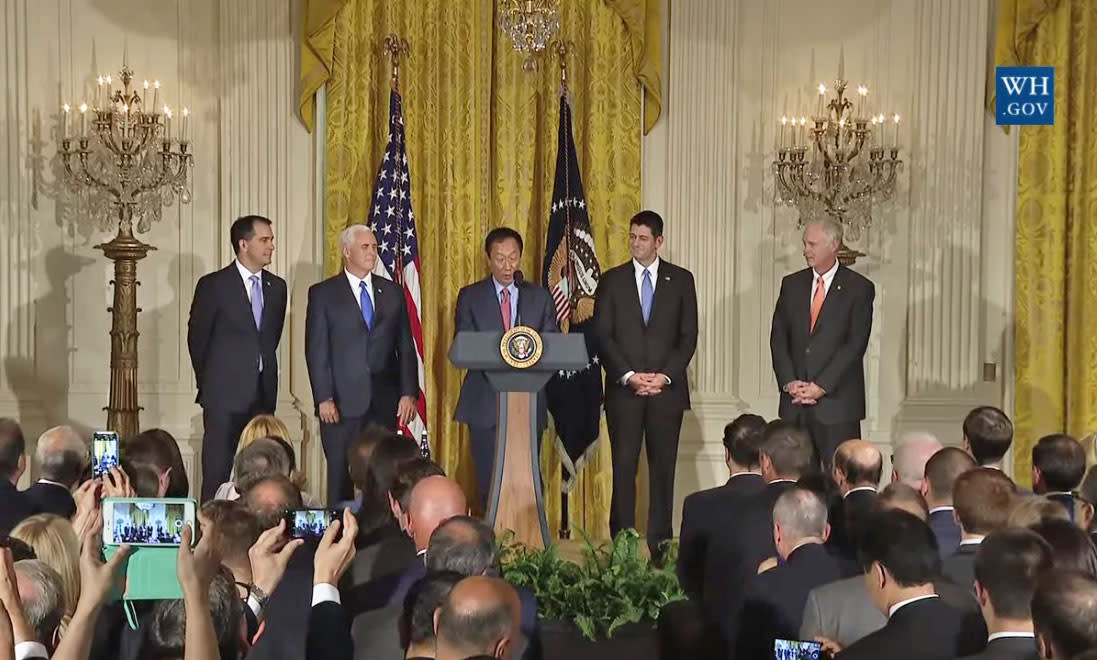 Foxconn, supplier to companies like Apple, BlackBerry, Nintendo and Microsoft, formally announced its plans to open a factory in Wisconsin, which is part of a $10 billion investment in production in America. The Taiwanese company's upcoming facility in the American Midwest is expected to employ at least 3,000 people and potentially increase to 13,000 total jobs, a win for Trump's agenda to return manufacturing jobs to the US.

"If I didn't get elected, he wouldn't be spending $10 billion" on American facilities, Trump said about Foxconn CEO Terry Gou. The full, untrimmed video is below -- skip to 49:15 when the press conference starts.

Earlier this week, sources told The Wall Street Journal that Foxconn was "nearing a decision" to open plants in Wisconsin for producing large-screen TVs. Last month, the company announced after its annual shareholders meeting that it was considering investing $10 billion in facilities in seven US states -- including Wisconsin. (The others included Illinois, Indiana, Pennsylvania, Ohio, Michigan and Texas.)

This comes hot on the heels of Trump telling The Wall Street Journal that Apple CEO Tim Cook promised him the tech company itself would open up three production facilities in the US. It's possible that Trump got Foxconn and Apple mixed up, though the President explicitly name-dropped Cook.

Apple did not return our request for comment on Trump's comments yesterday.

In this article: apple, business, foxconn, manufacturing, trump, wisconsin
All products recommended by Engadget are selected by our editorial team, independent of our parent company. Some of our stories include affiliate links. If you buy something through one of these links, we may earn an affiliate commission.