It's not perfect, but it's very close.

It's been years in the making, but Chromebooks are escaping "second computer" or "cheap netbook" status. Google thinks these machines can be your main computing device, and they're finally getting better build quality, nicer screens and quality keyboards. But they're also getting higher prices.

ASUS' first entry into the premium Chromebook space is the Chromebook Flip C302. This is the second Flip ASUS has made, but it's significantly different from the first, which was a tiny, netbook-sized device with a low-quality touchscreen and weak Rockchip processor. But for only $250, it offered the essential Chrome OS experience in a super-portable package.

The new Flip is a different beast entirely, made to compete directly with Samsung's $550 Chromebook Pro. It has a bigger, pixel-dense screen, Intel processor and access to the Google Play Store for Android apps. The Flip's $470 price, significantly higher than the original, reflects these upgrades. But after spending a few weeks with the Flip C302, I've come to think it might be the best Chromebook on the market right now. It's not perfect, but it's enough computer for almost anyone.

The Chromebook Flip C302 is significantly larger and heavier than its predecessor -- but that's a good thing. The original Flip was too cramped to use comfortably for long periods of time, and its screen was tiny, dim and pixelated. ASUS went back to the drawing board here, and about the only thing the new Flip has in common with the original is its 360-degree hinge.

The touchscreen now measures 12.5 inches with a 1,920 x 1,080 resolution (which can simulate 2,400 x 1,350 in the OS), compared to the original's 10.1-inch, 1,280 x 800 display. At the Flip's highest resolution, everything is insanely tiny, and most people will probably run it at either 1,900 x 1,080 or 1,536 x 864. I stuck with the latter and found that I had enough real estate to work comfortably while both text and images stayed crisp and sharp. I prefer the taller, brighter and more vibrant screen on Samsung's Pro, but the Flip's display is still one of the better I've seen on a Chromebook. 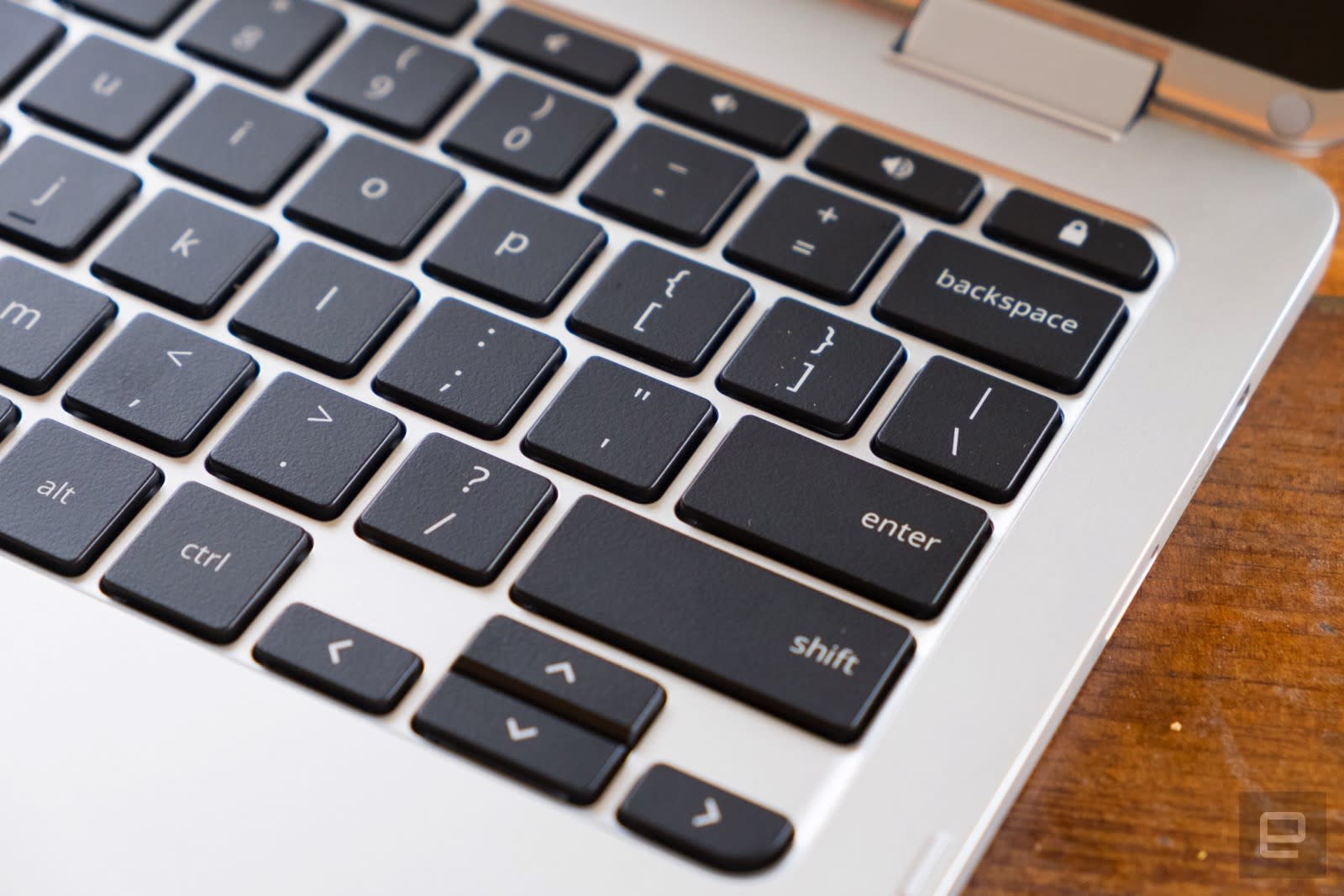 Thanks to its larger screen, this year's Flip also has a significantly more comfortable keyboard. It's full-size, and the keys have a surprising amount of travel. It's backlit as well, and overall it offers a better typing experience than the Chromebook Pro and the original Flip. I had no qualms using this computer for hours on end every day. The trackpad is similarly solid: It's responsive, large and comfortable. I wish it was a little taller, but that's a minor nit.

The one downside of the larger hardware is that the Flip is much less usable as a tablet. With a 12.5-inch screen and an all-aluminum body that weighs 2.65 pounds, it's not at all comfortable to hold up in front of you. Microsoft's Surface Pro (1.7 pounds) and Apple's 12.9-inch iPad Pro (1.5 pounds) both have removable keyboards, which makes them significantly lighter in tablet mode. Despite the versatility of the 360-degree hinge, the Flip is a traditional laptop first and foremost.

To make audio work in both tablet and laptop modes, ASUS put the speakers on the side of the Chromebook Flip. Whether because of this placement or the hardware inside, sound is even worse than I would have expected from these tiny speakers. There are a number of tablets and laptops with surprisingly good audio, but this isn't one of them. It's not a deal breaker but something to be aware of if you envisioned watching a lot of movies without headphones. (Ed. note: Just use headphones.) Port selection is also limited -- with two USB-C jacks and a micro SD slot you get the basics, nothing more. 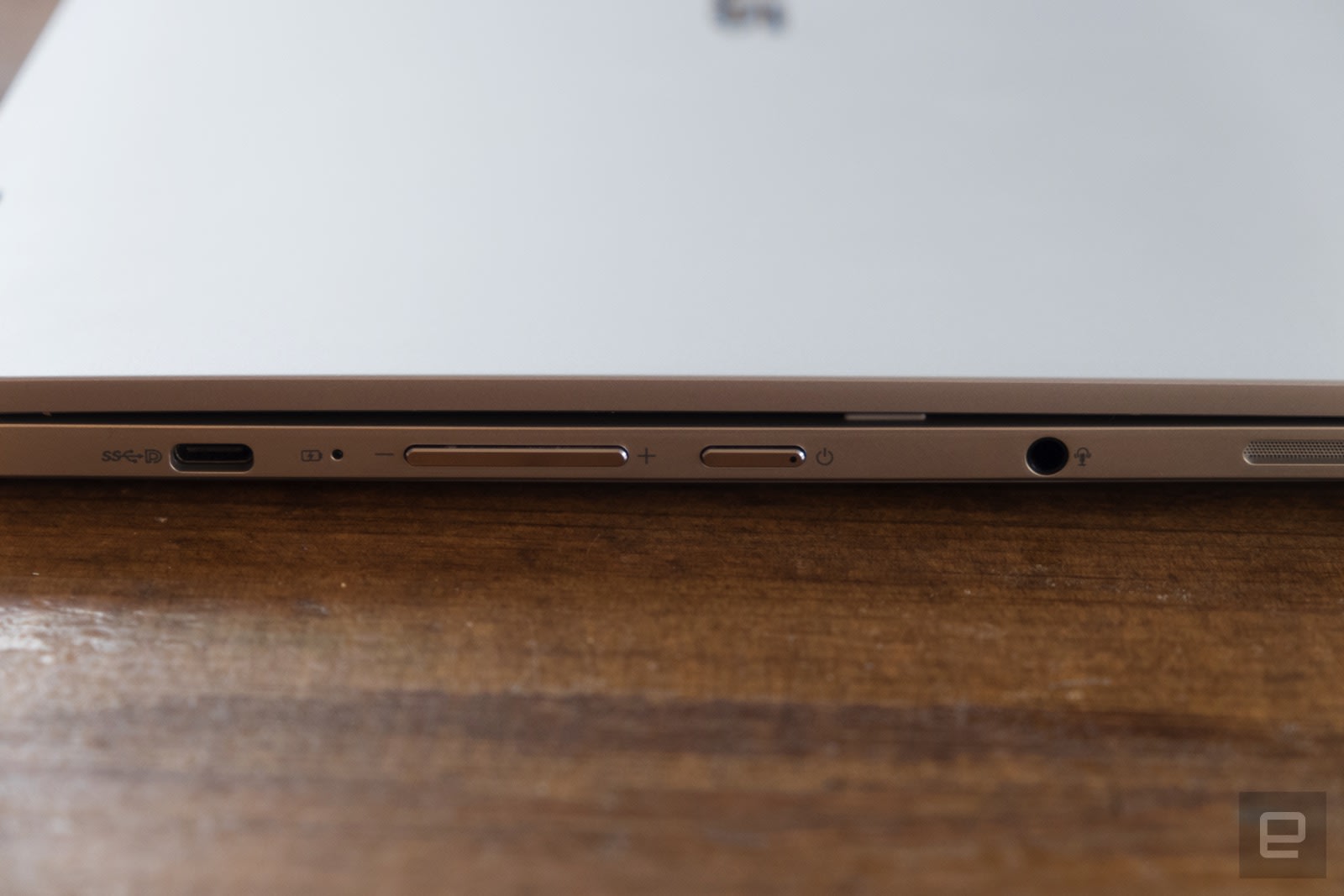 This year, ASUS traded the rather weak Rockchip processor for Intel's Core m3-6Y30, which proved to be more than enough for my typical Chrome OS workflow. I didn't experience any slowdowns or stutters while running several browser windows with about a dozen open tabs in each. I was also running the web apps for Google Keep, TweetDeck, Slack, Hangouts, Google Play Music and Todoist, as well as the occasional Android app (more on that later). The Intel processor along with the 4GB of RAM provided smooth performance -- occasionally, tabs might have needed to refresh when I had a lot open, but by and large I had a smooth experience.

ASUS dropped 64GB of storage in this computer, which is twice what you'll find in Samsung's competitor. In the past, I've had no problems using Chrome OS with only 32GB of storage -- but since the Flip lets you install Android apps (many of which save data on local storage), going with 64GB was a smart move.

Unfortunately, a higher-resolution display and more-powerful processor mean battery life has taken a hit, relative to the original Flip. This year's model lasted 7 hours and 47 minutes in our battery test, which loops an HD video with screen brightness set to 66 percent. That's about three hours fewer than the original and a good bit below the 10 hours ASUS claims. My day-to-day usage saw similar results: I'd usually have to reach for a charger after six or seven hours. That's not bad, but it's pretty pedestrian. However, I'm absolutely willing to trade a few hours of battery life for a bigger, better screen and more horsepower. Fortunately, the USB-C charger tops the battery off pretty quickly -- you just won't want to leave it at home if you're planning to be out and about for a full day of work. 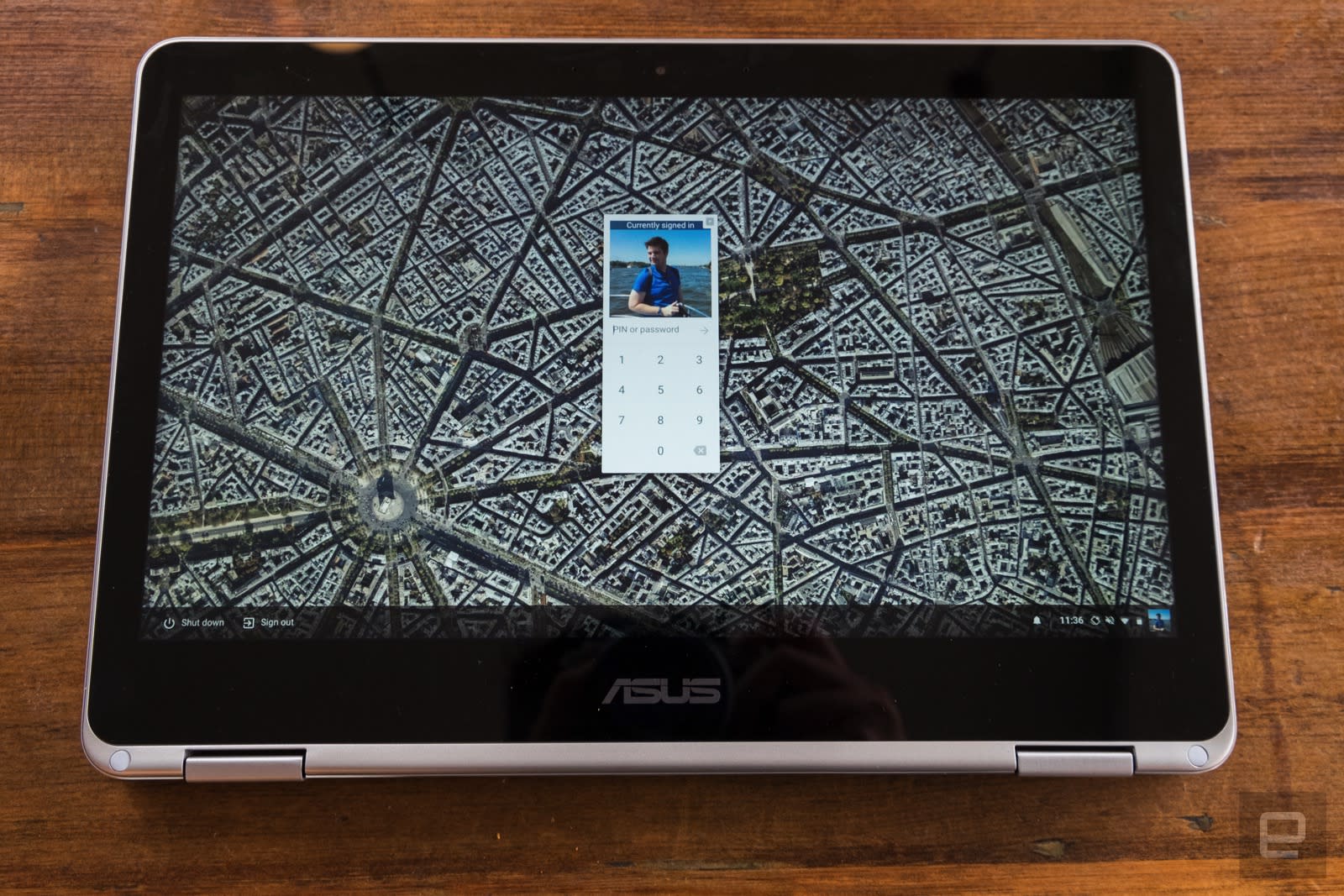 When I reviewed Dell's Chromebook 13 almost two years ago, I was surprised at how much of my work I could do in Chrome OS without any compromise. Things have only improved since. At this point many people will be able to get by easily with just a Chromebook. So much of our lives run through a browser these days that not having native apps just isn't a deal breaker anymore.

Of course, there are plenty of people who need more power and flexibility than a Chromebook provides; the Flip isn't for them. You can't edit 4K video (or really any video at all), and there still isn't a great native photo editor for Chrome OS. If you need to store a lot of files locally, the 64GB hard drive will prove inadequate.

If you find Chrome OS to be too limiting, access to the many apps in the Google Play Store might help you locate the software your Chromebook needs. I've been playing around with Android on Chrome OS for about a year now, and what I've decided is that for the most part, you're better off sticking with web apps. There's no real reason to install the Facebook app over just opening the site in your browser, for example. But if there's a specific piece of software that isn't on the web, the Play Store can often close that gap.

I'm a Lightroom user, so I installed Adobe's mobile Lightroom app and now I can edit photos on a Chromebook. It's not perfect (I still haven't found a good way to watermark photos when using Chrome OS), but it's a lot better than other options. Microsoft's Office apps for Android are surprisingly robust and work well on a desktop -- you'll just need to shell out for an Office 365 subscription to use them.

Android apps are also useful if you want to take things offline. Installing the Android Netflix or Google Play movies and TV apps means you can download shows and watch them on a flight. Similarly, you can save playlists and albums through the Google Play Music and Spotify apps for Android. And you'll be able to edit those Office docs while offline as well. Chromebooks, like most modern computers, are still much more useful with an internet connection, but at least you don't have to stow your Chromebook away and forget about it when you're on a cross-country flight.

Probably the biggest catch here is that most developers design their apps for phones and rarely take larger screens into account. It's the same thing that has doomed Android tablets. Occasionally it's nice to have a small vertical app slice on the side of your screen, but it would be great if more apps had a better full-screen experience. Another downside is that Chrome OS doesn't let you dynamically resize Android apps the way you would with native programs on basically all other platforms. You're stuck with either phone view or full-screen. That's not to say that Android apps aren't useful; just be aware that the experience doesn't feel complete quite yet. If you've paid any attention thus far, you'll know that the Chromebook Flip's most direct competitor is the $550 Samsung Chromebook Pro. For the extra money, you get a slightly better screen and Samsung's S Pen stylus for note-taking and drawing apps, but the keyboard is slightly worse and not backlit. That said, I haven't reviewed a final production version of the Chromebook Pro; I've only tried a preproduction model. There have also been reports about a critical deal-breaking bug in the Chromebook Pro, though an update that rolled out a few days ago could fix that problem.

Even if the Chromebook Pro was bug-free, it's hard to say if it's worth the $70 premium over the Flip. Aside from the display, they have similar hardware, and the Flip has twice the storage space. I originally thought the superior display on the Pro would make it my favorite of the two, but now I'm not so sure.

Another option is Samsung's Chromebook Plus, a laptop that's identical to the Pro except that it uses an ARM processor instead of an Intel chip. At $450, only $20 cheaper than the Flip, we wouldn't recommend it -- non-Intel Chromebooks have always been a mixed bag from a performance perspective. There's also Lenovo's Chromebook 13. It's a no-frills laptop that handles the basics well but lacks a backlit keyboard, touchscreen or 360-degree hinge, and it won't save you any money over the Flip.

Beyond Chromebooks, there are countless Windows laptops to consider, but $500 usually won't get you much. One good option is Acer's $550 Aspire S5-371-3164 (whew). It's a 13-inch Windows 10 machine with a 1080p screen, Intel Core i3 processor, 4GB of RAM and 128GB of solid-state storage. Most Windows laptops at this price are pretty compromised, but this Aspire should provide a decent experience. 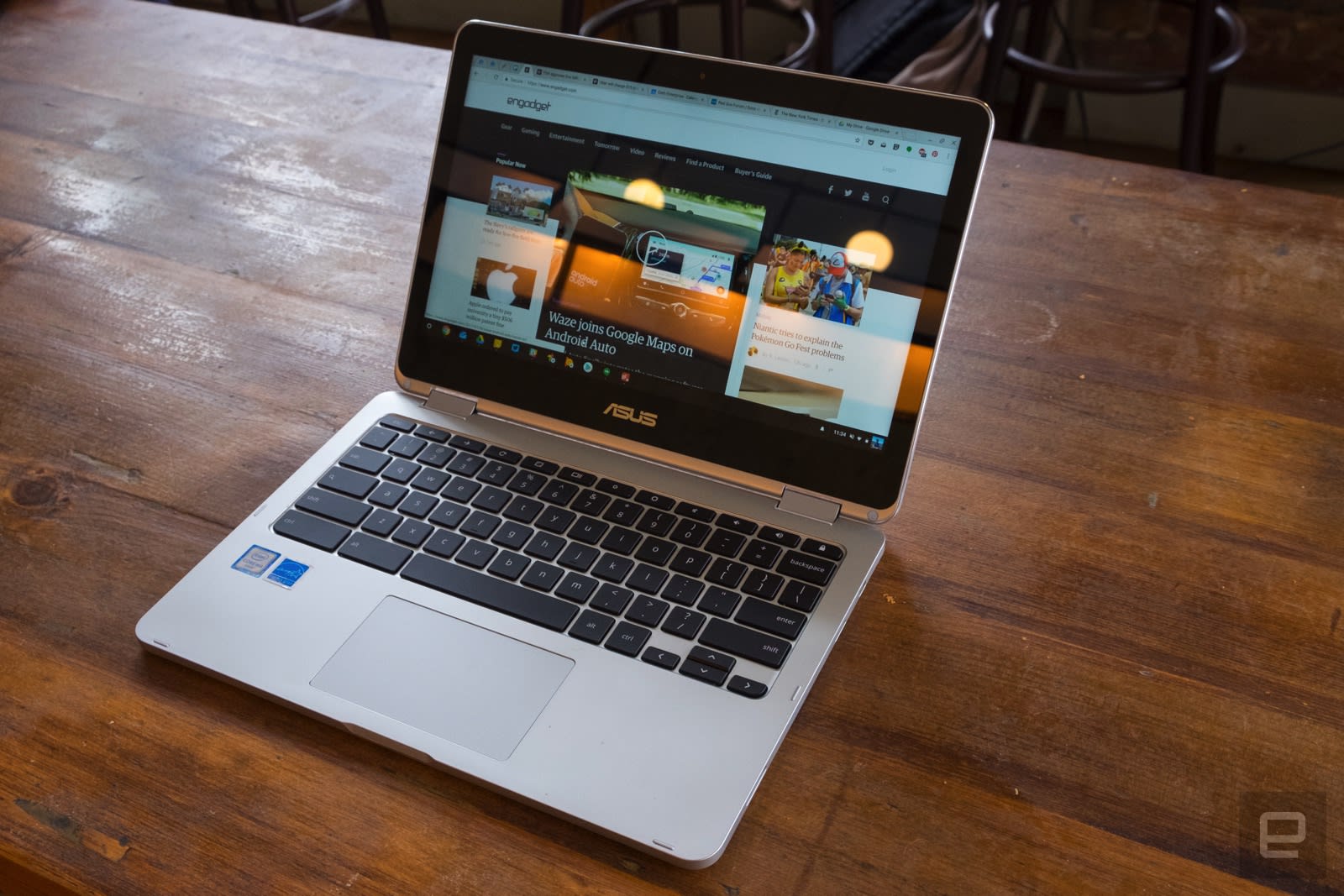 After the frustrations that ASUS' first Chromebook Flip caused, I wasn't expecting much out of the new model. But I'm happy to say I've been surprised. This is probably the best Chromebook for most people. For less than $500, the Flip gets almost everything right: It's fast, with a good keyboard, screen and battery life. On the software side, Android apps are starting to make the Chrome OS experience more complete.

I wish the screen was a little better and that the battery lasted an hour or two longer -- but when we're talking about a $470 laptop, I'm willing to compromise a little bit. It won't replace a fully loaded MacBook Pro or Surface Book, but the Chromebook Flip is a strong performer that's compact, well-built and won't break the bank. It's exactly what a Chromebook should be in 2017.